Marlies Battle Back to Defeat Comets 5-3 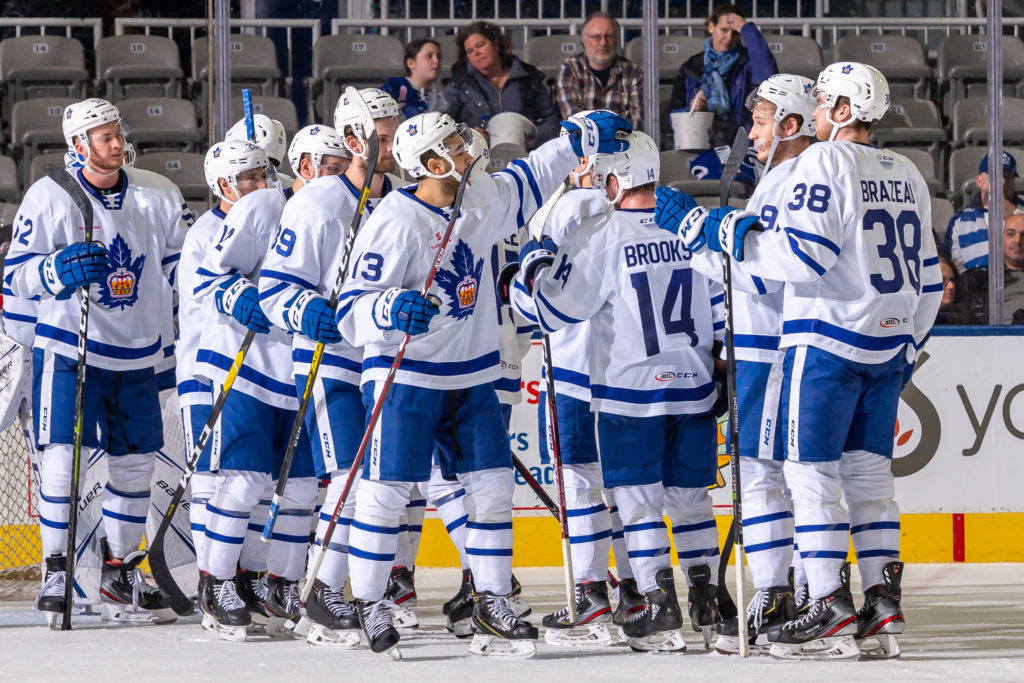 The Marlies battled back from a 3-1 deficit today to defeat the Utica Comets 5-3.

Coming off a a 4-3 loss to the Comets yesterday, the Marlies were looking to start a new streak and close out a three-in-three weekend with a win. The Marlies found themselves down by two after 40 minutes of play, but dug in and rallied in the third period with four unanswered goals to come away with the two points.

Adam Books opened the scoring on the power play at 4:55 of the first period, tapping in a pass from Jeremy Bracco. The Comets answered back with a goal at 7:32 and added a shorthanded marker at 16:37 to jump ahead 2-1.

Utica added a power play goal midway through the second period to extend their lead to 3-1. The Marlies were held to only four shots on goal in the middle frame and would head to the dressing room to regroup down by two.

Hudson Elynuik put Toronto back in it at 9:19 of the third period, redirecting a rocket of a shot from Jordan Schmaltz into the back of the net. At 10:48 Adam Brooks found the loose puck in front of Comets’ goal and made no mistake burying his second of the game to tie the game 3-3. Jesper Lindgren scored the go ahead goal at 14:45 after his shot found its way through traffic. At 17:39, Jeremy Bracco and Brooks converted on a two-on-one to make it 5-3 as Brooks completed the hat trick.

The Marlies will head to Rochester on Wednesday for a midweek matchup against the Americans before returning home to host a back-to-back against the San Antonio Rampage this weekend.

On Toronto’s comeback in the third period:
The guys just stuck with it. That’s what we asked of them in between periods, said stick with it. Asked them to get a little more traffic on the net, they did exactly that and pucks went in for us. I couldn’t be more proud of our guys, they really dug in at the end of a long week.

On the team’s two wins in their first three-in-three:
It’s good character from the guys. Good leadership all the way right through. They didn’t give up. It would have been an easy game to kind of pack your hat and say we’ll live to fight another day but they dug in. They stuck with it. As a coaching staff, we’re extremely proud of them.

The Marlies close out a three-in-three weekend today in a rematch against the Utica Comets.

In their first meeting of the season, the Comets edged the Marlies 4-3 to snap Toronto’s seven-game winning streak. It was Toronto’s first loss at home of the season (9-1-0-0). Kenny Agostino scored Toronto’s second goal at 18:22 of the first period on the power play during yesterday’s game. Agostino has 11 points (7 goals, 4 assists) in eight games and currently leads the team in goals (11).

With yesterday’s win, the Comets improved to 13-7-1-0 and extended their win-streak to three games. Reid Boucher registered a goal in yesterday’s contest and continues to lead the Comets in that department (15-8-23).

The Marlies were 8-3-0-1 in November and will be looking to carry that momentum into December and get a new streak started today.