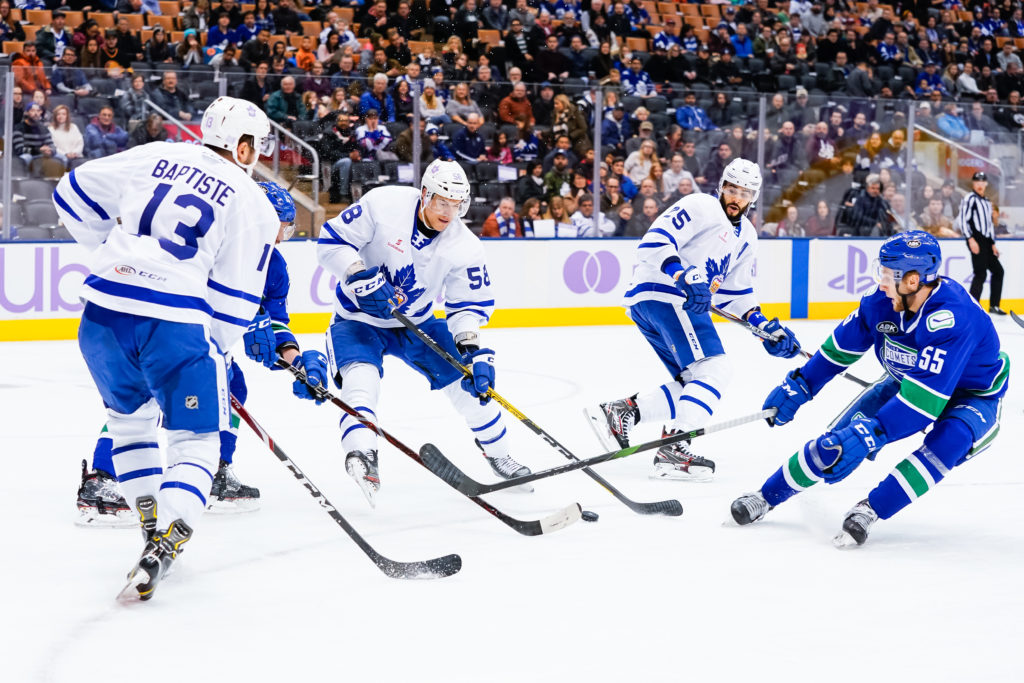 The Marlies suffered their first home loss of the season on Saturday in a close 4-3 decision to the Utica Comets.

Tanner MacMaster opened the scoring for the Marlies for the second time in as many games at 11:50 of the first period, extending his point streak (4-4-8) to eight games. Pontus Aberg and Egor Korshkov assisted on the goal. The Comets made their way onto the scoresheet at 16:14, capitalizing on a power play opportunity to even the score 1-1. The Marlies responded with a power play goal from Kenny Agostino at 18:22 to restore a one-goal lead heading into the first intermission.

The Comets converted on the power play again at 9:49 of the second period to knot things up 2-2. The score remained tied through 40 minutes of play.

The Marlies will have a chance to respond against the Comets as they close out this 3-in-3 tomorrow at Coca-Cola Coliseum. Puck drops at 4:00 PM.

On Toronto’s goaltending tandem (Kaskisuo and Woll):
It’s been terrific. No matter who’s in the net they’ve been sharp and ready to play. They’ve always given us a chance to win games. Woll did tonight. He did a great job. We just weren’t sharp enough in front of him to get the win for him.

On Kenny Agostino:
I’d say it’s what we expected of Kenny. He’s an AHL veteran. He’s led the league in scoring before. We know he’s a producer and I think in the room he’s been a great voice. He’s a smart guy, very personable. He helps the young guys and everyone alike get along and he brings people together.

The Marlies extended their win-streak to seven straight last night, coming from behind to defeat the Rochester Americans in overtime. They’ll be looking to keep a nine-game home win streak alive today as they face the Comets for the first time this season. The Marlies are 10-4-1-0 in the past five years when taking on the Comets at home and are 6-0-2-1 against North Division opponents so far this season.

Utica (12-7-1-0) comes into today’s game riding a two-game win streak after defeating Laval and Syracuse in their previous two games. The Comets currently sit in fourth place in the North Division standings and seventh in the Eastern Conference.

Puck drops at 1:30 PM on Leafs Nation Network. Fans across Canada can also stream the game live in the Official Maple Leafs App.

Proceeds from today’s 50/50 draw and tonight’s player jersey auction go to support Camp Trillium. Fans can text LEAFSHFC2019 to the number on screen (647-360-5543) tonight during the Maple Leafs game to bid on lavender warmup jerseys worn by players from both the Maple Leafs and your Toronto Marlies.