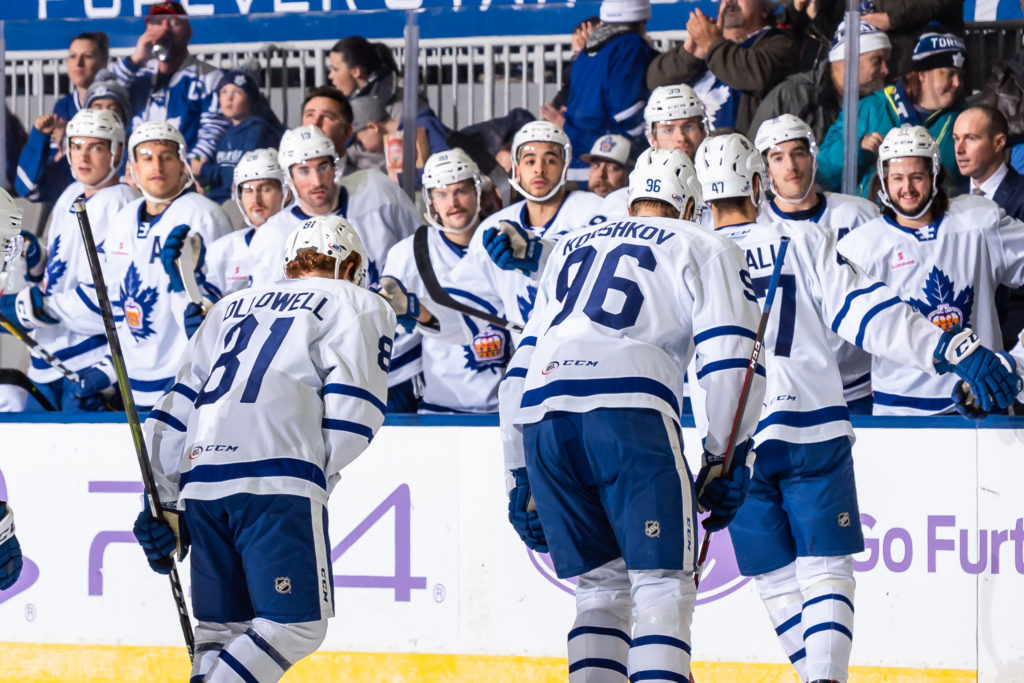 The Marlies picked up their second win of the weekend and sixth straight on home ice in a 4-3 win over the Texas Stars.

It was clear early on that the Stars were ready to bounce back from yesterday’s 8-4 loss, and they were granted an early power play opportunity as Teemu Kivihalme was booked for interference at 3:10 of the opening frame. The Stars capitalized on the ensuing power play to take an early 1-0 lead. Nearing the half-way mark of the first, Pierre Engvall gave the Marlies life, walking around two opposing players before wiring a shot past Jake Oettinger from the high slot. Pontus Aberg and Mac Hollowell assisted on Engvall’s 7th of the season and 3rd of the weekend. The Stars took back the lead at 11:40 and held onto it for the remainder of the opening frame.

Much like yesterday’s game, the second period was the game-changer for the home team as the Marlies tallied three goals to jump ahead 4-2. Egor Korshkov set the tone with a shorthanded marker just 11 seconds into the middle stanza. Kristians Rubins and Pierre Engvall assisted on his 8th of the season. At 8:56, Nicholas Baptiste finished off a huge rush from Tanner MacMaster to give the Marlies their first lead of the game. Baptiste’s 3rd of the weekend was assisted by MacMaster and Jesper Lindgren. Matt Read rounded out the second period scoring, firing home a one-timer off a pass from Tyler Gaudet at 17:28 of the period. Mac Hollowell picked up the secondary assist on Read’s 2nd of the season and the Marlies held a 4-2 lead after 40 minutes of play.

The Stars pulled within one at 7:22 of the third period, putting the Marlies on their heels. Michael Hutchinson was put to the test as the Stars peppered him with 20 shots in the final frame, looking to force extra time. Hutchinson stood tall and the Marlies held on to pick up their third straight win.

The Marlies are back in action on Wednesday to host the Laval Rocket in a 7PM start at Coca-Cola Coliseum.

On if the team received contributions from the full lineup:
Yeah, offensively for sure. But our depth clearly wasn’t enough for us to fight the fatigue that we had throughout the game today. It really showed in the third period. It’s been a really long week for our team. We had four really long practice days this week that I thought were really important days for our team to take some steps. I thought we saw signs of that here but I thought the combination of that and the fact that we went with five defencemen yesterday and lost Sandin who has played so much for us and is so valuable, and everybody else is playing so much more on both nights here. I think it took its toll, so I think we’re going to give our guys a bit of a pass for a lot of the stuff in the game today.

On Michael Hutchinson’s first start with the Marlies:
He was great all game. He battled all game, he was solid for us there. I don’t think there was anything he could do on the goals. He made some big saves at key times when we were sloppy in front of him, so it was really nice and I’m really happy for him, and the guys are all happy for him to get that win.

On the team’s home record:
No matter where we are, we have to pick up points. We’ve had a good start to the season here for sure, but you look around in the division and there’s a lot of really good hockey teams in our division, and they’re not all going to make the playoffs. So, it’s going to be a battle all the way through. Even though it’s early here, you’ve got to collect points when you can. We’ve been fortunate enough to do that while really not quite yet finding our game and fighting injuries and all of those types of things. Today our injury list is at six guys, and that’s been a problem for us. But the fact that we’ve been able to collect points keeps us in the fight.

The Marlies are back in action today for the second half of a back-to-back against the Texas Stars.

An explosive six-goal second period propelled the Marlies to an 8-4 win over the visiting Stars yesterday, extending their home win streak to five straight. Toronto was 2-for-2 on the penalty kill and was 1-for-3 on the power play. Nick Baptiste scored their second shorthanded goal of the season in the second period.

Kenny Agostino scored his second career hat trick with goals at 4:29 of the first period and 6:37 and 10:18 of the second period in yesterday’s game. Agostino now has 14 points (8 goals, 6 assists) through 12 games this season. Jeremy Bracco recorded three assists in yesterday’s contest, becoming the fifth player in franchise history for all time assists (94). Bracco sits fourth in team scoring with 13 points (2-11-13) through 14 games.

“I liked a lot about our game, especially our start,” said Sheldon Keefe following yesterday’s game. “We spent a lot of time on their half of the ice, a lot of time with the puck. We attacked the net with a lot more frequency all throughout the game, so I liked that.” The Marlies will look to keep the momentum going and build on yesterday’s success during today’s contest. Today’s game marks the second of four against the Texas Stars this season.

Puck drops at 4PM on Leafs Nation Network. Fans across Canada can also stream the game live in the official Maple Leafs app.