Marlies Double up on Stars 8-4 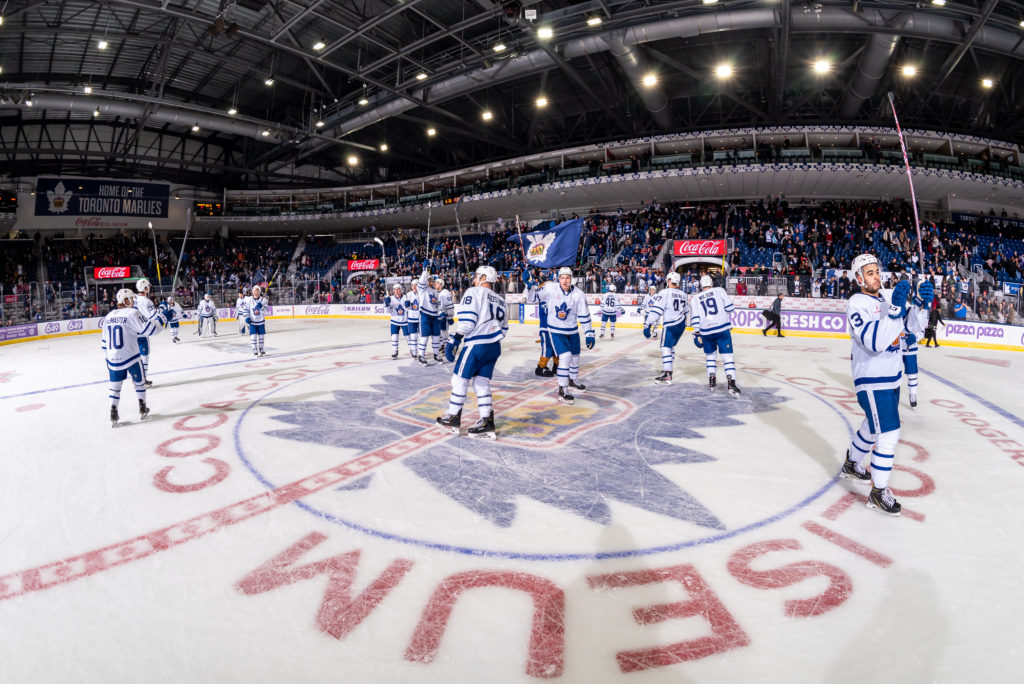 The Toronto Marlies kicked off a five-game home stand in style today, doubling up on the visiting Texas Stars in an 8-4 final.

The Marlies had an early opportunity on the power play when Stars forward Dillon Heatherington was called for hooking. Toronto capitalized on the man-advantage as Jeremy Bracco found Kenny Agostino on the doorstep and he made no mistake tapping home the opening goal. Pontus Aberg had the additional assist on the goal. Pierre Engvall extended the lead to 2-0 at 7:26, scoring right as a Stars penalty expired. The Stars got one back at 12:29 to cut the Marlies’ lead to 2-1.

The Stars evened the score 2-2 early in the second period to put the Marlies on their heels, but the home team was quick to respond as Nick Baptiste capitalized on a 2-on-1 rush to restore the lead. The goal brought the Marlies to life as the offence exploded with five more unanswered goals. Baptiste struck again 1:47 after his first goal on a shorthanded opportunity to extend the lead to 4-2. 1:37 later, Agostino notched his second of the game to put the Marlies ahead 5-2. At 10:18, Agostino struck again to complete the hat trick with his third goal of the game. Less than a minute later, Ben Harpur sent Hudson Elynuik and Tanner MacMaster off to the races and MacMaster made no mistake depositing his third of the season to make it 7-2. Pierre Engvall closed out the second period scoring frenzy with his second of the game at 18:33. The Marlies held an 8-2 lead through 40 minutes of play.

The Stars added two goals early in the third period to cut the deficit to 8-4, but that would do it as the Marlies preserved their lead for the remainder of the frame.

Toronto and Texas square off again tomorrow for a 4PM start at Coca-Cola Coliseum.

On today’s game:
I liked a lot about our game, especially our start. We spent a lot of time on their half of the ice, a lot of time with the puck. We attacked the net with a lot more frequency all throughout the game, so I liked that. Liked that our power play got us rolling in the game for sure. A lot of really good things. About half of the game is probably a throwaway, given the nature of the score and all that but I liked how we started. I liked that when we had opportunities to score we made plays and made it real hard on the goalie.

On the status of defencemen Timothy Liljegren and Rasmus Sandin:
Liljegren has been skating here, I think today might have been his third day back on the ice, so that’s very positive given the nature of his injury and how it looked in the early going. That’s good for us. He’s not going to play tomorrow but he looks like he’s a lot further along than we thought he might be. Sandin left the game today, more precautionary. He just had to get some tests and stuff done to figure out exactly what is happening with him and we’ll see how it is from there. At this point I wouldn’t expect him to play tomorrow but depending on the test results and how he’s feeling, that could change.

The Toronto Marlies kick off a five-game home stand today with the first half of a back-to-back against the Texas Stars.

The Marlies haven’t played at Coca-Cola Coliseum since October 20th when they picked up their fourth straight home win in a shootout victory over the Cleveland Monsters. The blue and white will be looking to extend their home winning streak to five straight today when they host the last place Texas Stars for the first time since the 2016 Calder Cup Championship series.

The Stars have had a rough start to the season with only three wins in 15 games played and one win in their past 10. The Marlies have split their past 10 contests (5-2-2-1) and will be looking to start a new streak as they kick off a five-game home stand today.

The Marlies are led by Pontus Aberg, who has recorded 13 points (8 goals, 5 assists) through 13 games this season. Rasmus Sandin has points (1-3-4) in three consecutive games.

Today the Marlies kick off their Graduate Bobblehead Giveaway series with Morgan Rielly. The first 3,000 fans through the gates will receive the limited-edition bobblehead.