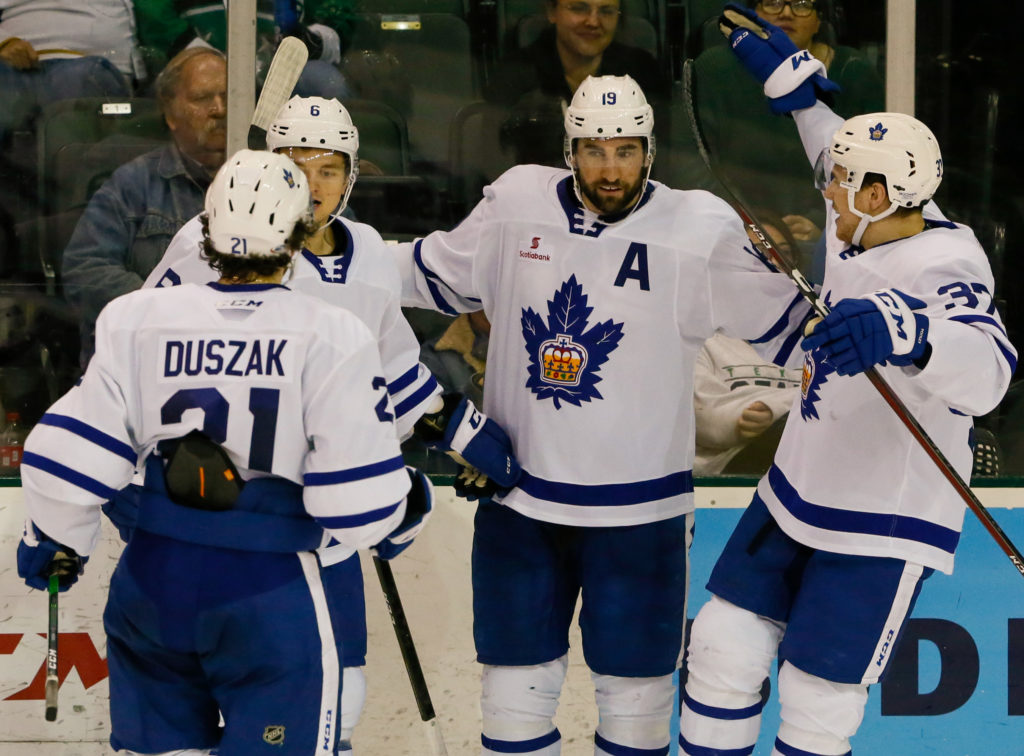 The Toronto Marlies battled from behind on Monday and overcame a 2-0 deficit to pick up a crucial two points in their game in hand against Texas.

Toronto found themselves in an early hole when Stars’ forward Nicholas Camaano opened the scoring just 3:56 into the first period. The Marlies put 12 shots on goal in the opening 20 minutes but couldn’t find the back of the net as the Stars held their 1-0 lead heading into the first intermission.

Joel L’Esperance extended the home team’s lead to 2-0 at 15:08 of the second period with his 22nd of the season. The Marlies continued to pepper Jake Oettinger with shots, but couldn’t get anything past the Stars’ netminder. Down by two, the Marlies headed to the dressing room once again to regroup and come out ready to battle back. And they did just that.

Garrett Wilson solved Oettinger at 7:26 of the third period, burying a rebound on the doorstep to get the Marlies on the board. Hudson Elynuik and Joseph Duszak recorded the assists on the goal. At 14:44, Pontus Aberg buried a backdoor shot on the power play to even things up. The goal brought a renewed energy to the Marlies’ lineup as the team continued to scratch and claw to generate opportunities. Penalty trouble would cost the Stars again late in the game as the Marlies’ special teams converted again at 17:37. Kenny Agostino scored the go ahead goal, burying the puck in a frenzy in the crease. The goal set a career high in goals (25) scored in one season. This was Agostino’s third game-winning goal of the season. Joseph Woll picked up his 11th win of the season in a 30-save effort as the Marlies held on to come away with the huge two points and move back within four points of the fourth place Syracuse Crunch.

Toronto will head to Binghamton on Wednesday before returning home for a pair of games against the Crunch this weekend.

On tonight’s win:
It felt really good. The guys deserved the game tonight. Even going into that third, being down 2-0, we got a lot of good chances and we were just having a hard time finding the back of the net but the process was there. I thought that the whole game was a good, complete game for us.

On what he saw during the third period in the comeback win:
Their mentality to get to the net. We just tried to build a mindset today of what our expectation is of the group, they just went out and put down the pedal. It was great to see and they were all bought in and it was fun to watch. This was really important for us and it meant a lot to the guys.

On Egor Korshkov’s injury during the second period:
Yeah, it was a scary moment. Korsh is a tough guy. Our medical team did a great job helping him in that moment and were able to repair what happened and he was able to get back on the ice.

On the players who have stepped up:
Aberg’s been great the last few games. He’s really stepped up. Agostino has been our best player for about two months.  He’s really, really driven the offence for us and even at times when we get down by two goals, he goes out and has physical shifts and gets a couple good hits and brings energy. He’s finding ways to have an impact in every hockey game.

On tonight’s win:
For sure, it feel goods. I think you know everyone worked their ass off tonight obviously. And you know it was huge, Willy getting us going in the third and Woller was unreal the whole game.

On establishing a career high in goals (25):
It feels good. You know, some years they just go in more than others. We’ve had so many different line combos the whole year. I just think it speaks to the depth of our team really. We have so many forwards that are skilled and can make plays and I’ve been fortunate to play with a lot of them like Aberg, Petan, MacMaster as of late, Korshkov. I’ve really kind of played with everyone at some point I feel like.

On tonight’s win:
Obviously, a special game for us coming back here and getting those two points. I think the guys really worked hard to earn that. I think we had spots in that game where we were really good and really turned it on in the third period so it was really nice to see us get rewarded for that kind of stuff.

The Marlies are back in action tonight, making a quick stop in the Lone Star State for their makeup game against the Texas Stars.

After a tough stretch of divisional matchups, the Marlies will be looking to bounce back tonight in the fourth and final meeting of this cross-conference series. Toronto started off the series against Texas with a convincing 8-4 win and followed it up with a 4-3 win the following day. The Marlies were then set to kick off their annual Boat Show road trip with a pair of games against Texas in January, but only played one game due to a medical emergency. The Stars closed the gap in the regular season series with a 5-3 win on home ice.

The Stars (24-46-2-4) recently snapped a three-game losing streak with a 5-3 win over the Grand Rapids Griffins. They currently sit in seventh place in the Central Division with 54 points, five points back from a playoff spot.

With the playoff race heating up, the Marlies will need to string together some wins here if they hope to solidify a spot in the postseason. Toronto has fallen to seventh place in the North Division with 59 points; six points back from the fourth place Syracuse Crunch. “It was a frustrating hockey game,” said head coach Greg Moore following Saturday’s 5-4 loss to Binghamton. “The guys competed the whole game. Based off of the things that we talked about and wanted them to execute, it was there. We got a lot of good looks but obviously, at this juncture of the season, we just need the points.” 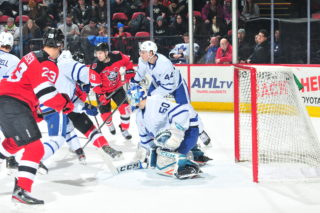