Marlies Come up Short in Texas 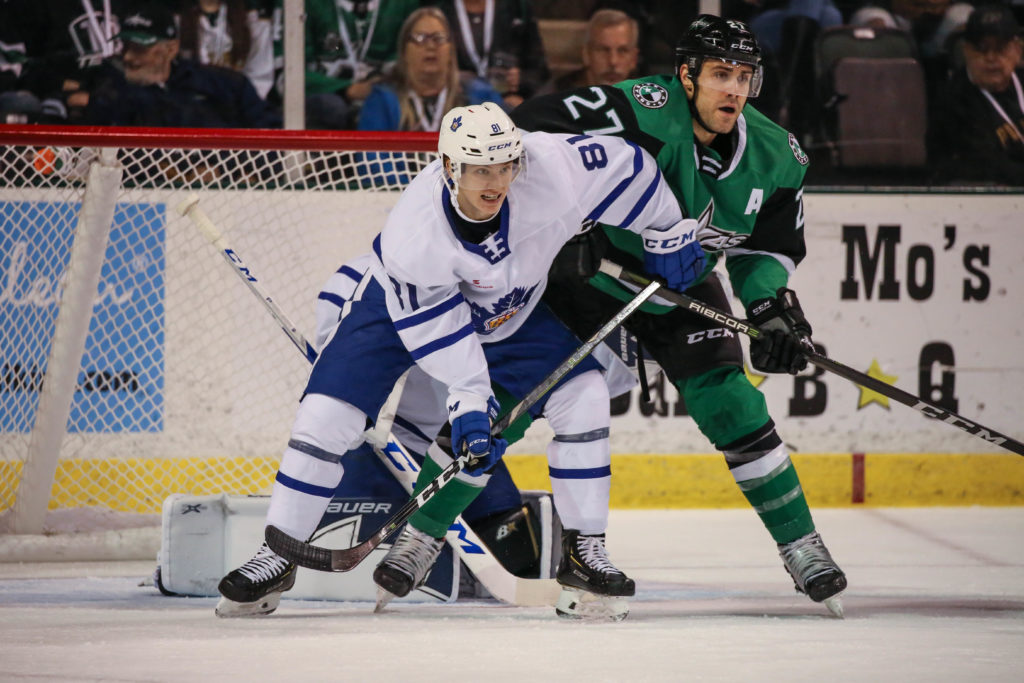 After forfeiting last night’s game in Texas due to a medical emergency, the Toronto Marlies returned to the ice tonight to officially kick off their annual Toronto Boat Show road trip.

Penalty trouble cost Toronto early in the first as Texas converted on a man-advantage just 1:46 into the opening frame to take a 1-0 lead. The Marlies were able to answer back just past the halfway mark of the period as Timothy Liljegren made a great play at the blue line to keep Toronto in the zone before finding Rich Clune in the slot who wired home his third of the season to even the score 1-1. The score stayed locked at one apiece heading into the first intermission.

The Stars notched a second power play goal at 15:15 of the second period to jump ahead 2-1. Although the Marlies outshot the Stars 13-5 in the middle stanze, that would be the lone goal of the period as Texas held a one-goal lead heading into the final frame.

Nic Petan potted a pair of power play goals, the first at 7:26 and the second at 10:15 of the third period to give the Marlies their first lead of the night. The Stars were quick to respond and tied things back up at 12:46. The home team then restored their lead at 16:35 of the third period. Trailing by one with time winding down, the Marlies called a timeout to regroup as Kasimir Kaskisuo left the crease in favour of an extra attacker. Unfortunately once play resumed, the Stars scored on the empty net to seal a 5-3 victory.

The road trip rolls on as the Marlies close out the weekend tomorrow in San Antonio. Puck drops at 4:00 PM EST.

On whether the team improved from the previous game:
It’s tough to talk on it. The group really wanted this hockey game. We thought as a staff the process was there – the team played the right way, the effort, our details, our habits, controlled a good portion of the game, controlled the puck, played the style of game we wanted to play. I think the frustration sets in, we just didn’t get the result we wanted but if we’re looking at the longevity of this group and the direction we’re going, tonight was some good signs.

On if the power play got the looks he wanted:
Yes and no. There are still times where we’re a little slow. We give the PK time to get comfortable. We need to find a way to be more of a threat and get more interior looks. It’s definitely an area we’ve got to be better at power plays, got to execute and find ways to have more of an impact on the hockey game and find a way to be a little more dynamic.

On the play of the defencemen:
I was really happy with our D. I thought our gaps were phenomenal. I thought we denied lines. I thought we got pucks out of their hands early, allowed us to counter and play fast and really have the ice tilted. They really steered the ship for us tonight.

The Toronto Marlies are in the Lone Star State tonight for a tilt against the Texas Stars.

This marks the Marlies first return to Texas since the 2018 Calder Cup Playoffs, and it’s their third meeting with the Stars this season. Toronto hosted Texas for a back-to-back in November, edging the Stars 8-4 and 4-3 to take a 2-0 lead in the four-game regular season series.

The Marlies will be looking to get back in the win column tonight as they aim to string together some points during their annual Toronto Boat Show road trip. The Marlies dropped their last contest, a 4-2 decision to the visiting Lehigh Valley Phantoms, and now sit in third place in the North Division and fifth in the Eastern Conference. Timothy Liljegren has been on a tear lately with points (1-5-6) in five consecutive games.

The Stars are fresh off a 4-0 win over the Grand Rapids Griffins and will be pushing for their third straight win tonight with the Marlies in town. The Stars are 5-4-1-0 in their past 10 games and currently sit in seventh place in the Central Division and 11th in the Western Conference.