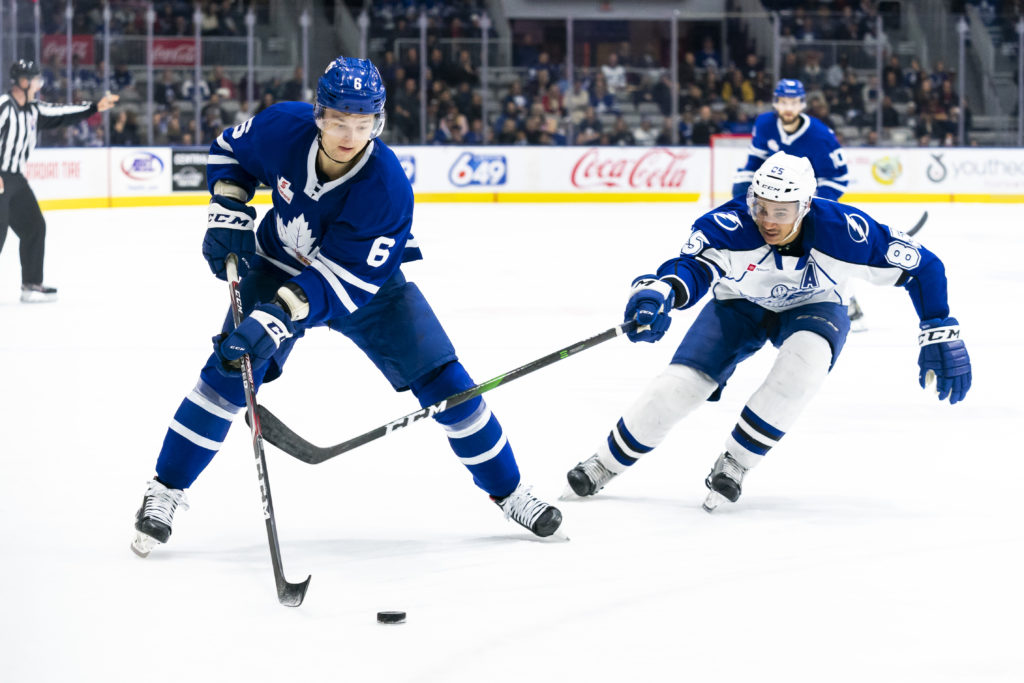 The Marlies dropped a tough one tonight as the visiting Syracuse Crunch edged them 2-1 in a hard fought battle.

The Crunch came out strong in the opening minutes looking to set the stage early on and bounce back from the loss the night before. The visitors peppered Joseph Woll with 14 shots in the first period, but the Marlies netminder stood tall to keep them off the board. Teemu Kivihalme potted the lone goal for the Marlies at the 13 minute mark of the first period, driving the net and beating Crunch goaltender, Spencer Martin in close. Timothy Liljegren and Matt Lorito assisted on Kivihalme’s fourth of the season.

The middle frame was heated and resulted in eight penalties, six of which were committed by Syracuse. The Marlies couldn’t get rolling on the power play and Martin turned away all 16 shots he faced in the frame to keep the Marlies from extending their lead. Late in the frame, Gemel Smith got his team on the board to even the score 1-1 heading into the second intermission.

Taylor Raddysh scored four minutes into the third period to give the Crunch their first lead of the game. The Marlies continued to press in the third period but just couldn’t find that extra goal as the visitors held on for a 2-1 victory.

The Marlies will head out on a three game road trip, beginning with a stop in Bridgeport on Wednesday.

On the power play being affect by a lack of execution or a hot netminder:
Probably more so a hot netminder. Towards the end we got some really good looks. He found a way to make saves. Our earlier power plays we didn’t execute on some of our entries and stick to our game plan, so we had a hard time there with some turnovers. They found their way and they just couldn’t find the back of the net towards the end.

On Toronto keeping composure through the game:
Yeah, we were expecting them to come out much harder than yesterday. They proved that. They had a real good push in the first five minutes. We were pretty happy with how the team responded to that push. We got better as the period went on, we started to find our game and it was a good process for us. The team played hard, played the right way. It was just one of those games that we just couldn’t find the extra goal.

On whether momentum was a part of the decision in pulling Joseph Woll for an extra attacked at 15:44 of the third period:
One hundred per cent. It’s a few things. One, sometimes it might catch the other team off guard, they’re not expecting what guys to have on the ice at that moment within those moments if you do it early. Lot of times coaches are trying to time their more defensive guys for those last few minutes and if you do it a little bit early, you might catch some of their offensive guys on the ice who aren’t as responsible and second, you get a feel for where the game’s going. I thought we had a nice tilt in our favour to where we could apply some pressure and maybe get some extra time with an extra guy on the ice.

On defencemen Teemu Kivihalme and Timothy Liljegren:
Yeah, they played well. They’re both great skaters who can transition the game really well for us. They’re able to defend up ice. A lot of times teams don’t even get into our end because they can take pucks away at the offensive blue line and red line. It was really nice to have Liljegren back in the lineup.

On Joseph Woll’s performance tonight:
He played really well, gave us a chance to win a hockey game, made some big saves. It was good to see him in a game like this. It was kind of a playoff energy and mentality. It was a huge two points for us. We believe he did a great job and what was needed for us to win a hockey game.

The Marlies and Crunch are back in action tonight for the second half of their back to back at Coca-Cola Coliseum.

Toronto picked up an important two points in last night’s 5-2 victory over the Crunch and will be looking to carry that momentum into another crucial matchup here tonight. With last night’s win, the Marlies moved within two points of the Crunch, who fell to sixth place in the North Division with Binghamton and Laval both picking up wins last night. A win today would leapfrog the Marlies ahead of Syracuse in the standings.

Goaltender Parker Gahagen picked up his first win with the Marlies last night stopping 19 of 21 shots faced. “It’s a great feeling, just to be able to contribute to the team, said Gahagen following last night’s game. “I mean, it’s a critical time of the year having to be on the outside looking in with the playoff picture and I’m just happy we could get away with two points here.”

Kenny Agostino continues to lead the way for Toronto and tallied another two points with a pair of goals last night. Agostino has nine points (4 goals, 5 assists) in his last six games. He set a career-high in power play goals (9) scored in one season. Last night was his fourth multi-goal game of the season.

Puck drops at 7:00 PM on Leafs Nation Network. Fans across Canada can also stream the game live on the Maple Leafs App.