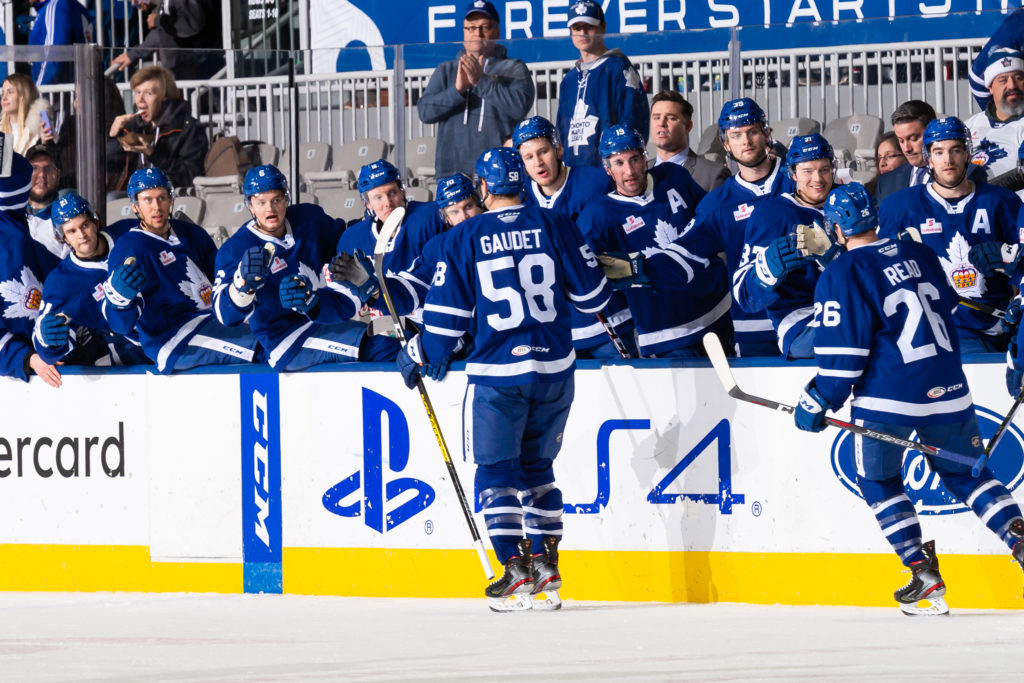 The Toronto Marlies bounced back to winning ways Friday night, defeating the visiting Syracuse Crunch 5-2 in an important divisional matchup.

The Marlies spoke about the importance of a strong start today, and they followed through on that by jumping out to a 2-0 lead in the first period. Kenny Agostino opened the scoring at 13:09 of the opening frame, capitalizing on a power play opportunity with an absolute rocket from the faceoff circle. Joseph Duszak and Nic Petan assisted on Agostino’s 26th of the season. 12 seconds after Agostino’s goal, Tyler Gaudet ripped a shot top shelf to put the Marlies ahead 2-0. Miikka Salomaki and Matt Read assisted on the goal. The Marlies held the Crunch to only five shots on goal in the opening frame and held a 2-0 lead heading into the first intermission.

Syracuse leading scorer, Alex Barre-Boulet got the visitors on the board at 8:26 of the second period to cut the Marlies’ lead in half. Late in the frame, Toronto restored a two-goal lead as Hudson Elynuik tipped in a shot from Michael Kapla for his fourth of the season. Again, the Marlies held Syracuse to only five shots on goal in frame and held a 3-1 lead heading into the final frame.

Kenny Agostino provided some more cushion, capitalizing on another power play opportunity at 6:26 of the final frame. The goal came from almost the same spot as his first period goal and gave the Marlies a 4-1 lead. The Crunch pulled their goaltender with over six minutes remaining in the third period in hopes of battling back with an extra skater. They got one back at 14:55 as Taylor Raddysh cut the Marlies’ lead to 4-2. Hudson Elynuik added an empty net goal for his second of the night at 19:14, sealing a 5-2 victory for the Marlies.

The Marlies and Crunch will square off again tomorrow night at 7:00 PM.

On if he’s satisfied with the team’s performance tonight:
Really satisfied. The team was bought into the whole sixty minutes. Thought our up-ice pressure took away a lot of their time and space and our D did a great job holding the middle of the rink and having good gaps. We played really fast today, countered fast, and it was a lot of executing the things we’ve been talking about as of late. The guys knew this was an important two points and it was good to see them show up.

On getting contributions from the entire lineup:
This time of year things are tight, every line can play. I mean every coach has been working with their team to iron out details and be responsible defensively all season so there’s not as many mistakes out on the ice right now. Any team that’s going to go deep and do anything special needs depth scoring.

On goaltender Parker Gahagen’s first win as a Marlie:
He was great. He always has a big smile on his face, he competes so hard. Great kid, all the guys like him in the locker room. The team was really happy to get this one for him.

On Kenny Agostino (2 goals):
Kenny has been our best player for the last two months. He showed up again tonight. He can absolutely wire a puck. It was good to see him show up on the scoresheet because he’s been doing a lot of good stuff and at times when the team’s not really rolling he’s the guy even going out, finishing a couple checks and bringing some energy as a leader for this group.

On his first win as a Marlie:
It’s a great feeling, just to be able to contribute to the team. I mean, it’s a critical time of the year having to be on the outside looking in with the playoff picture and I’m just happy we could get away with two points here.

The Toronto Marlies hit home ice tonight to open an important back to back against the Syracuse Crunch.

After a tough loss to Belleville on Wednesday, the Marlies will be looking to bounce back on home ice tonight against this tough divisional opponent. The Marlies have dropped both of their previous matchups against Syracuse this season and hope to make up ground in the six-game regular season series tonight. Following the games this weekend, the Marlies and Crunch are set to square off two more times, once more in Toronto this month and then again in Syracuse on April 10th.

It’s no secret that this is a big divisional matchup with serious playoff implications as the Marlies continue to chase the Crunch in a tight North Division race. An important four points are on the line this weekend as the Marlies look to climb their way back into a playoff position. Syracuse comes into tonight’s game with wins in four of their previous five contests and six of their last 10. The Crunch are holding onto fourth place in the North Division with 65 points. Binghamton and Laval are neck and neck with 64 points apiece, and not far behind is Toronto with 61 points.

Puck drops at 7:00 PM on Leafs Nation Network and TSN 2. Fans can also stream the game live on the Maple Leafs app.