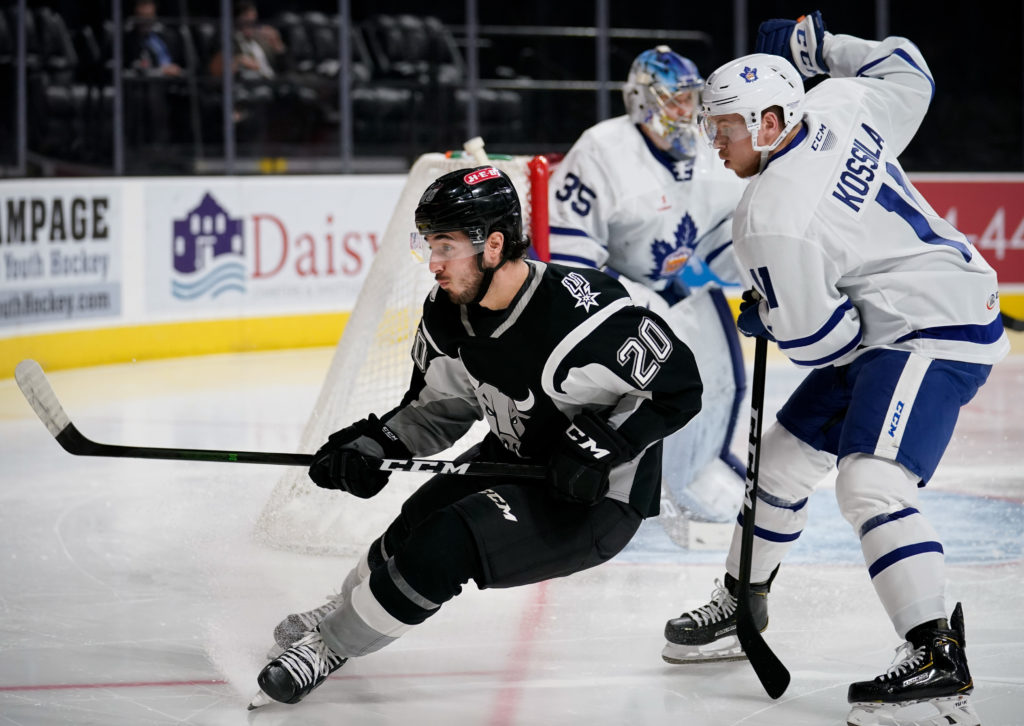 The Marlies did not get the start they wanted on Thursday night against the San Antonio Rampage, as the blue and white found themselves in an early hole. The home team opened the scoring quickly after being awarded an early opportunity on the power play after Mason Marchment got booked for hooking just 37 seconds into the game. San Antonio capitalized just five seconds into the man-advantage to jump out to a 1-0 lead. The Rampage extended their lead minutes later as Mike Vecchione beat Joseph Woll to make it 2-0. The Marlies were outshot 11-8 in the opening frame and trailed by two heading into the first intermission.

The Rampage kept their foot on the gas in the second period, notching two goals in the first half of the frame to pull ahead 4-0. The Marlies saw an opportunity to get on the scoresheet at 14:35 of the second period as San Antonio’s Nathan Walker would serve two minutes for hooking. Toronto converted late in the man-advantage when Scott Pooley batted the puck out of the air in front of the goal past Adam Wilcox. Pontus Aberg and Teemu Kivihalme assisted on Pooley’s third goal in two games. The Marlies were on the board but were down by three heading into the final frame.

Just past the halfway mark of the third, Jeremy Bracco and Nic Petan connected to bring the Marlies within one. Bracco found Petan alone in the slot and Petan made no mistake redirecting the puck up and over the shoulder of Wilcox. With the goal, Petan has now collected seven points (5 goals, 2 assists) through four games. Late in the frame with the Marlies pushing to get back into this one, Kenny Agostino came up with a big individual effort, scoring a wrap-around goal to bring his team within one. Despite a last minute frenzy, the Marlies were unable to complete the comeback and the Rampage came away with the two points in the 4-3 final.

On what changed from Toronto’s effort on Sunday to tonight’s game:
Well, it was clear from the start from the first period and a little bit into the second that we weren’t ready to play physically or mentally. Pretty frustrating that the group thought they were going to come into a game and have an easy time against a team that definitely wanted to respond from how Sunday went. As the game went on, we started to find our groove a little bit, a little too late. I did like our pushback and how we took control towards the end. There was a lot of good stuff there but really the game was lost in the first half.

On line changes in the game:
When we’re having a hard time getting things going, I looked to make some little changes or what could help (flipping Pontus Aberg and Mason Marchment). Once that happened, I thought those lines started to come on a little bit. How much of the change had to do with them just realizing that the team needed to step up or it was better chemistry but regardless we started to chisel away. Even in the second period five-on-five, we didn’t give up a lot but still again, first period, slow start, didn’t like our mindset.

On the team’s opportunities on net:
Some guys played strong and got to the net, held onto the puck and made good plays. I thought the first half of the game in our o-zone, we had a lot of turnovers between the top of the circles and the blueline. We either didn’t get pucks through from the point or we tried to force things that weren’t there high in the zone and it transitioned their game. We just need to use more of the zone, we need to hold onto the puck longer, use our possession style to our advantage and use our skillset and we just made it easy on them tonight.

Fresh off a 6-1 win, the Marlies are set to close out their four-game regular season series with San Antonio tonight, and will be looking to wrap up the Texas leg of their annual Boat Show road trip on a high note. Scott Pooley potted two goals in Sunday’s win while goaltender, Joseph Woll captured his seventh win of the season, stopping 40 of 41 shots. Building on Sunday’s success will be a focus heading into tonight’s game as the Marlies aim to string together some points before heading to Charlotte this weekend for a back-to-back against the defending Calder Cup Champions.

Sunday’s win certainly brought some confidence back to the Marlies’ dressing room as the team pulled together to snap a three-game losing skid. “The character of the group came back and we played the way we did yesterday and got rewarded for the thing in the game that went the right direction,” said Marlies head coach, Greg Moore, following Sunday’s game. “It was good to see some smiles and the team chemistry in the room after.”

Expect a fast-paced first period as both teams are well rested coming into tonight’s game, and surely the Rampage will be eager to respond here on home ice and snap a three-game losing streak. Puck drops at 8:00 PM EST on AHLTV. Fans can also follow along on Twitter (@TorontoMarlies) for live game updates.