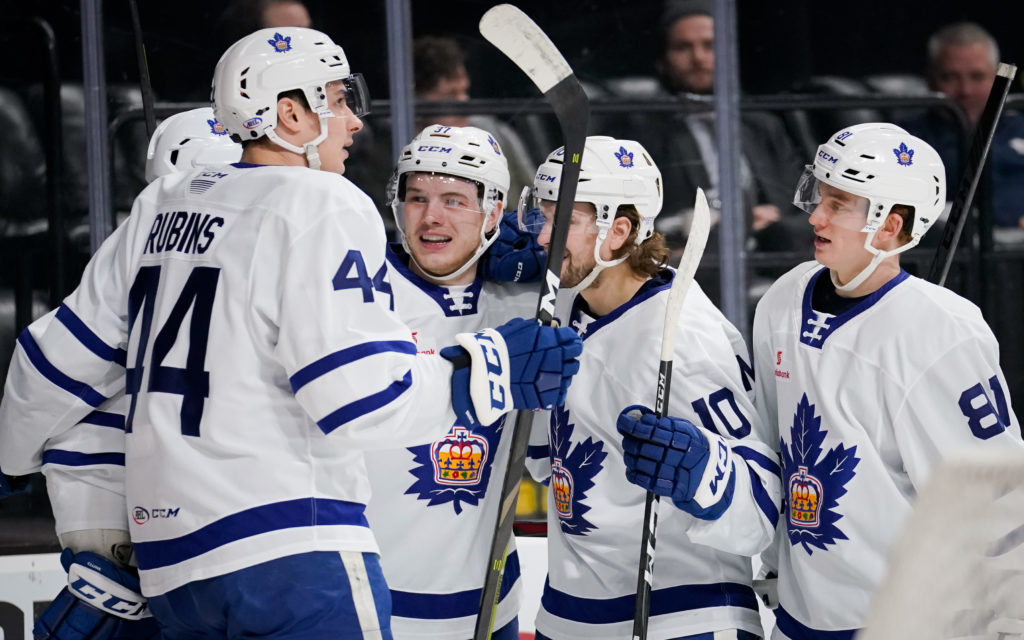 The Marlies bounced back in a big way today, closing out the weekend with a 6-1 win over San Antonio.

Tanner MacMaster opened the scoring at 8:02 of the first period, capitalizing on a power play opportunity to give Toronto a 1-0 lead. Darren Archibald and Pontus Aberg recorded the assists on MacMaster’s eighth of the season. At 13:05, Scott Pooley went racing down the right side and wired a shot over the shoulder of Ville Husso from the top of the hash marks. MacMaster and Nic Petan assisted on the goal as the Marlies found themselves up by two just past the halfway mark of the opening period. Four minutes later, the Marlies capitalized again on the power play as Petan potted his third power play goal in two straight games. Assists on the Marlies’ third goal of the game went to Kenny Agostino and Kalle Kossila. Toronto outshot San Antonio 15-14 in the opening 20 minutes and held a 3-0 lead on the scoresheet.

The Marlies picked up right where they left off, scoring just 1:02 into the second period. Pontus Aberg carried the puck in behind the net and banked it in off the back of Husso to make it 4-0. Garrett Wilson added to the lead at 16:31 of the second, tipping in a point shot from Timothy Liljegren for his seventh of the season. The assist extended Liljegren’s point streak (1 goal, 7 assists) to seven consecutive games. Joseph Woll turned away 11 shots in the frame to preserve the Marlies’ 4-0 lead.

Scott Pooley notched his second of the game at 8:13 of the third period, flying down the left side and beating San Antonio’s goaltender from almost the same spot, on the opposite side, as his first goal. The Rampage solved Woll and spoiled his shutout at 9:59 of the third period, scoring a power play goal to get on the board. That would be the lone goal for the home team as Woll turned away 40 shots in the game to pick up his seventh win of the season in a 6-1 final.

The Marlies will have a few practice days in San Antonio before these two teams meet again on Thursday.

On Toronto sticking to the process, resulting in a win:
Yeah, 100 hundred per cent. We didn’t get the result that we wanted yesterday but the character of the group came back and we played the way we did yesterday and got rewarded for the thing in the game that went the right direction. It was good to see some smiles and the team chemistry in the room after.

On Joseph Woll:
He gave us confidence. He had some big stops, especially in the second period when we spent a little in our end but he looked really solid, really calm. He looked like he was seeing the puck really well through traffic tonight. It was good to see.

On Scott Pooley:
He played great. He’s a goal scorer. It was good to see him get some puck touches and get some opportunities and he’s proven that he can put a puck in the back of the net. You can tell he’s playing with a little bit more calm, a little bit more confidence which is good. Sometimes it just takes guys some time to get assimilated to the level and get comfortable and he’s definitely done that.

On Toronto’s power play:
They did really good tonight. I thought they played faster, they generated a lot more, they gave a couple of different looks keeping the other team on their toes. I really like what we did tonight.

On what the team did the right way in today’s game:
I think it stems back to last night. We thought we played a really good game and we just didn’t get the result we wanted so we wanted to carry that in for a full 60 or as close to a full 60 as we could tonight. I think we did a really good job. We had a little bit of a lull there in the second to start but we picked it right back up. I think we showed that we got to our game again and they weren’t able to keep up.

On the team sticking to their process:
I think this is a huge bounce back win after last night. I think the guys really came together. It’s awesome to see us produce that much offensively. I think we’re really starting to come together. Coach’s message is each game kind of take it one per cent better so I think that was a step in the right direction for us.

On recent results not reflecting his performance:
I think I came out this week and tried to have a really good week at practice. I think it translated really well. Just trying to stay a steady mindset whether or not I get the results I want so I think it was a good result tonight.

On facing 41 shots:
It’s definitely a little bit easier to stay in it. Those games, I think, when you see pretty sporadic shots are kind of tough to stay locked in but when they’re throwing a lot of pucks on net, it’s nice.

The annual Boat Show road trip rolls on through San Antonio today as the Marlies close out the weekend with a 4:00 PM EST tilt against the Rampage.

Toronto will be looking to turn things around today and climb out of a three-game slump, while the Rampage will also be looking to get back in the win column today after back to back losses to the Chicago Wolves. This is the third meeting between these two teams and the Marlies lead the series 2-0 after picking up a pair of wins when San Antonio visited Toronto in December.

Following yesterday’s loss to Texas, head coach Greg Moore expressed that he wants to see more from the Marlies’ power play, commenting “there are still times where we’re a little slow.” He went on to say, “we give the PK time to get comfortable. We need to find a way to be more of a threat and get more interior looks. It’s definitely an area we’ve got to be better at power plays, got to execute and find ways to have more of an impact on the hockey game and find a way to be a little more dynamic.” The Marlies (22%) and Rampage (23.7%) both sit in the top five across the league in the power play department, and with both teams looking to get off the schneid, it will be interesting to see how they match up in special teams situations today.