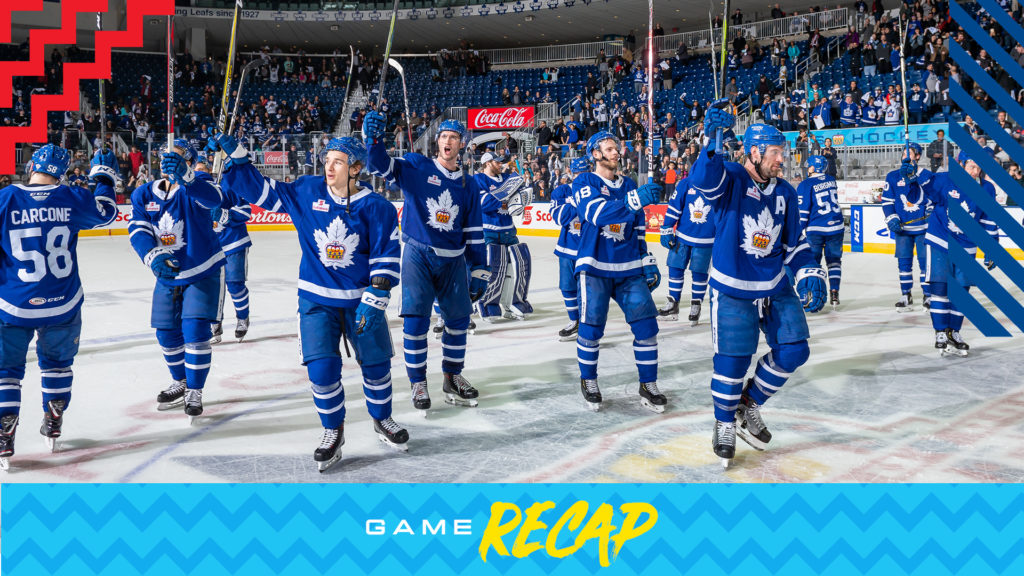 The Toronto Marlies advance for the eighth time in franchise history to the North Division Finals following tonight’s 3-1 win over the Rochester Americans to close out the North Division Semifinals. The Marlies become first team to advance to the second round of the Calder Cup playoffs, sweeping Rochester in the best-of-five series.

Adam Brooks led the way for the Marlies, scoring a hat trick to complete the series sweep on home ice. Brooks has four goals in the series against Rochester and now leads the AHL in goals. Kasimir Kaskisuo made 28 saves, including 16 in the final frame for the win. Kaskisuo is now 3-0-0-0 in the playoffs with a .960 Save Percentage and a 1.32 Goals Against Average. In the series, Kaskisuo stopped 97 of 101 shots through three games.

The Marlies will face the winner of the Syracuse-Cleveland series in the North Division Finals.

On the team’s play and hunger:
First of all, I think I want to talk about Rochester because I think that, you know, you look back on those first two games especially, I think that they gave us all that we could handle and we clearly, especially in those first two periods that could have gone entirely different. We got great goaltending and lots of luck and we stuck with it and found ways to win those games and put us in a good position. So, hats off to them, that’s a great hockey team that gave us all that we could handle and then some. As far as our team, obviously very proud. First of all, we were resilient enough to find our way back and to win those games on the road and I thought we were full marks for our win here today. Just played a really great hockey game. Adjustments that we asked our guys to make, I thought they went out and executed very well, they responded very well, they tied the game and we’re holding on there in the third period. That’s a desperate team. But I just liked a lot about our team today. So just lots of pride in terms of how they worked and how they came together during this series.

On Kasimir Kaskisuo:
I think his development in finding that confidence, in finding the consistency, I think it mirrors our team and our team’s development and our team’s confidence and our team’s consistency. We knew coming into this series that it was going to be very difficult to match this team at even strength, at five-on-five, so we thought our edge could be on special teams, which especially in the first two games and goaltending, we thought we needed our goaltender to be our best player and he was, so credit to him for all the work that he’s put in and riding the emotions of the season and we lose Michael Hutchinson and you know, it’s a downer for the team but Kaskisuo just has not faltered a second since Hutchinson has been gone and even it goes back further than that and even when Hutchy was here. It’s been a couple months now and Kas has been as good as any goaltender in the American Hockey League and he proved that here in this first round. We don’t win this series the way that we did without him clearly.

On stopping 97 out of 101 shots in three games:
It’s something we’ve kind of worked towards, just have to peak at the right time. It’s worked so far and the team is really clicking and kind of working really good together with the defence, so it’s making my life pretty easy.

On what’s been the biggest difference with the team in the playoffs:
There’s no giving up and there’s no cracking. All three games (Rochester) had, all the time they’ve come hard. We’ve really just weathered those storms they’ve thrown our way, so that’s been good to see that nobody’s bending under pressure.

On game two and the confidence coming into today’s game:
Just comes from the whole season, I mean just gradually building up but just trying to eliminate the weaknesses that might have been there in the start of the year and just kind of get in the right places at the right time here in the playoffs.

Thoughts on his hattrick:
Going on to round two. I think that’s obviously the goal any time you slip into a playoff series is to win. In a series where we were probably the underdogs and not a lot of people probably expected us to come out of this series especially with Buffalo finishing early and sending down some of their good players, so you know we’re happy to be moving on, especially to do it in that kind of fashion. Obviously, we still think we have more. We didn’t play our best hockey but we’re definitely happy to be moving on.

On confidence moving forward:
I think when you play more, you know you go through what we went through last year, you’re getting that opportunity to go the Finals. To be a part of the lineup every day in the playoffs, I think you develop confidence and coming into the season I thought I started off very well. Obviously there were some setbacks, you know kind of hindered my performance, but I think overall with the amount of ice time I got and the situations that Keefer has put me in over the last two years, I was able to develop confidence, especially you know playing for a coach like that so it’s a lot of fun.

Schedule for North Division Finals to be confirmed.

The Marlies have an opportunity to advance to the North Division finals tonight as they host the Rochester Americans at Coca-Cola Coliseum for game three of the best-of-five series. Toronto stumped the Americans with back-to-back wins in Rochester over the weekend to take a 2-0 lead in the series.

Through two games, Toronto has outscored Rochester 7-3. The Marlies’ penalty kill has been perfect, turning aside six Rochester power plays and adding a shorthanded goal. Kasimir Kaskisuo has continued to shine in goal with 69 saves through two games, posting a 1.48 goals against average and a .958 save percentage.  Special teams and strong goaltending will continue to be key factors for the Marlies as the series comes to Toronto.

Puck drops at 7:00PM on Leafs Nation Network and AHLTV. Fans across Canada can also stream the game live in the Maple Leafs app. Follow us on Twitter and Instagram for behind the scenes action from Coca-Cola Coliseum.