Marlies Take a 1-0 Lead in Series Against Rochester 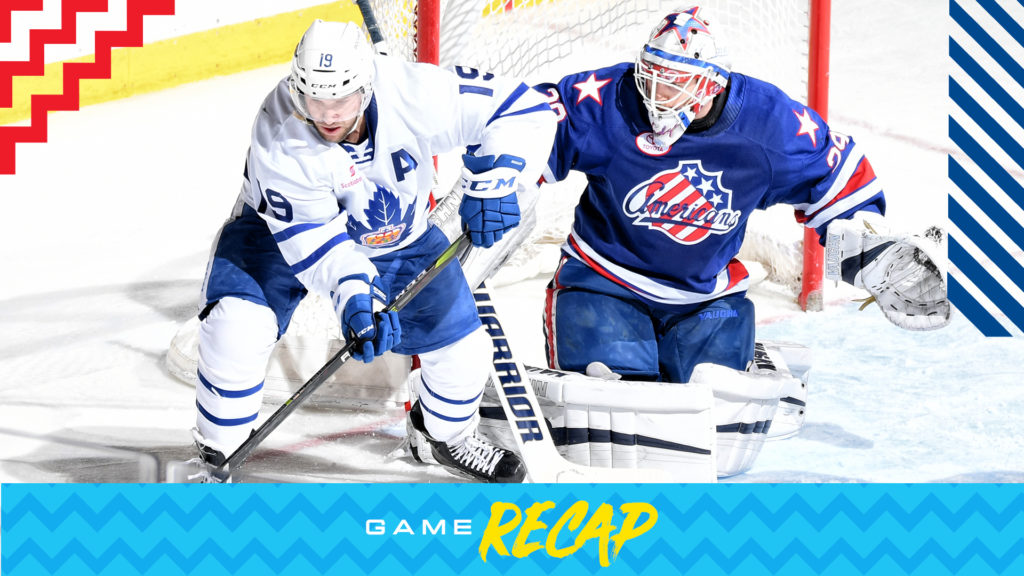 The Toronto Marlies kicked off the North Division semifinals on the right foot with a convincing 4-1 win over the Rochester Americans to take a 1-0 lead in the best-of-five series.

The opening minutes saw exciting back-and-forth action and it was obvious that emotions were running high as both teams looked to tilt the ice in their favour. The Amerks outshot the Marlies 15-6 in the opening frame but neither team could find the back of the net as the game remained scoreless after 20 minutes of play.

Nicholas Baptiste opened the scoring at 2:53 of the second period, burying a rebound from an awkward angle. Chris Mueller and Rasmus Sandin picked up the assisted on the opening goal. At 14:31, Chris Mueller extended the Marlies’ lead to 2-0, tapping home a shot from Rasmus Sandin. Dmytro Timashov registered the secondary assist on the goal. The Marlies held a 2-0 lead through 40 minutes of play.

At 10:50, Mueller found himself right on the doorstep on the power play and potted his second of the night to give the Marlies a 3-0 cushion. Jeremy Bracco and Rasmus Sandin recorded the assists on Mueller’s second of the night. At 14:45, Adam Brooks scored a beautiful shorthanded wrap-around goal to extend the Marlies lead to 4-0. Pierre Engvall had the lone assist on the goal. Late in the frame, the Amerks found the back of the net and spoiled the shutout for Kasimir Kaskisuo. Tage Thompson was the lone goal scorer for Rochester.

The series continues on Sunday for a 3:05PM puck drop at the Blue Cross Arena.

On today’s game:
Obviously the first period, we were overwhelmed there for a good portion of it. But we knew there were going to be chunks of the game, chunks of the series that aren’t going to look very good, that’s a very good team over there that don’t let you breathe a whole lot when they get rolling with the amount of depth that they have. So that was the case in the first period but I thought from that point on that our team just relaxed and settled in. The second and third period I thought were pretty good in a lot of ways. We didn’t give up very much. Then I expect the series to go, we have to hang around at five-on-five and win the games on special teams. We talked about that a lot coming in and that was the recipe today. We got some great goaltending, a lot of luck in the first period to keep the puck out of our net and that was enough to give us some life to settle into the game and then we got our chances and made it count.

On the veteran group:
That’s what those guys are here for. It’s our veterans. It’s also our guys that were part of last year’s championship team, we expect to lead the way and play at a high level early on here and bring the rest of the team with them. It did take us some time to get here but I thought the response from our team in the second and third periods. The second period was better than our first, our third period was a lot better than our second so that’s a really good sign for our team. We’ve got to turn the page here, win or lose today, we had to wash this game away and learn from it, build on it and be a whole lot better in game two.

On being able to settle into the game:
It’s huge. They’re a heck of a hockey team five-on-five. We knew our power play needed to come up big in order to get an opportunity and you’ve got to give your hats off to Kas for keeping us in there in the first because they really came as we expected, a good five-on-five team like I said. But we weathered a storm. Sometimes in the playoffs that’s what you need to do especially in early games early in the series when their team’s at home, they’ve got all their energy going on top of being a skilled team, we really weathered it and a lot of that has to do with Kas. But then we settled in, got a goal, got a power play goal and then I thought we really found our game from that.

On being able to capitalize on the power play:
A lot of times that doesn’t happen, a lot of times the penalties are rare. I think we really had only two, that last one is a little funky in a way. We tried to dial it in all week, tried to prepare. We had our tendencies all year which they did a good job on and I think we changed a few things so hats off to AJ (MacLean) and our guys executed, we executed so that’s a huge bonus. We’re going to need to continue that to be successful against this team.

The Toronto Marlies are set to face the Rochester Americans in the first round of the 2019 Calder Cup Playoffs, beginning on the road in the best-of-five series before returning home to Coca-Cola Coliseum for Games 3 and 4 on April 24 and 26 at 7:00 p.m. EST.

This season marks the eighth straight season and 11th trip to the postseason in the franchise’s 14-year history. The Toronto Marlies clinched a playoff berth on April 5 and finished the regular season seventh overall with 91 points and a record of 39-24-9-4.

The opening round series marks the third postseason meeting between these two teams. They met in the first round of the 2012 and 2013 Calder Cups Playoffs, with the Marlies sweeping both of those best-of-five series. This season however, the Americans have proven to be a challenging opponent. These North Division rivals met six times during the 2018-19 season, with the Americans taking the season series 5-1. It won’t be an easy road, but the playoffs offer a reset for everyone and sticking to the systems that brought success throughout the regular season will be important heading into this series.

“We recognize we have a great challenge in front of us here against a very good team, so we’re going to have to make sure our game is as sharp and as good as it can be and we need to play our best hockey,” said head coach, Sheldon Keefe.

While the Americans finished the regular season third overall with a record of 46-23-5-2 and have the advantage of home ice, the Marlies’ record on the road this season should not be overlooked. The Marlies were 23-9-3-3 when playing away from the Coliseum and had the best road power play (26.0%) in the league. It’s safe to say that starting the series on the road, and capitalizing in special teams situations could certainly be advantageous for Toronto.

All Toronto Marlies playoff games will be broadcast on Leafs Nation Network and AHL TV. Fans across Canada can also stream games through the Toronto Maple Leafs app. Single game tickets are available for sale at Ticketmaster.ca. For more information on the Toronto Marlies 2019 Playoffs Presented by Scotiabank, visit www.marlies.ca/playoffs2019