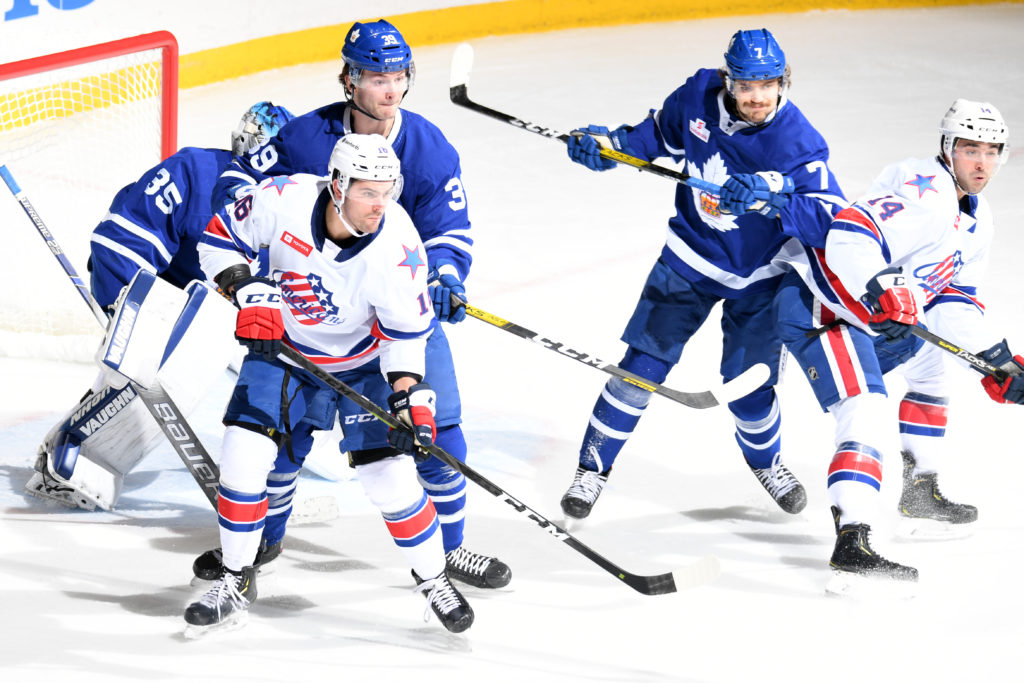 It was a tough night in Rochester as the Marlies were shutout for the first time this season.

The Americans came out flying in the opening minutes and the early pressure paid off as they scored two goals in the first 4 minutes to take an early 2-0 lead. The home team didn’t let up, firing 13 shots on goal in the first period and holding the Marlies to only 6.

Curtis Lazar extended the Amerks’ lead to 3-0 midway through the second period. The Marlies struggled to generate good opportunities and found themselves down by 3 after 40 minutes of play.

An early goal in the third period put the Amerks ahead 4-0. The Marlies put 9 shots on goal in the final frame but couldn’t find a way to cut the deficit. Toronto was 3-for-4 on the penalty kill and was 0-for-3 on the power play. The Marlies are now 7-2-2-1 against North Division opponents and are 1-1-0-0 against the Rochester Americans.

The Marlies will look to get back in the win column as they return home to host the San Antonio Rampage for back-to-back games this weekend.

On whether there was a point in the game Toronto had the game they wanted to:
I don’t really think so. By the time we got the game we wanted to, it was already over. They came out extremely hard. That first period they gave it to us pretty good. It just didn’t seem like we were ready to go. By the time we got our competitiveness up, the game was already half over and that’s way too late to get started then.

On what the difference was between the two teams:
I think it was just competitiveness. I think Rochester came out, they worked really hard, our feet weren’t moving as much as we wanted them to and it really showed in that first period.

On what he saw out of Rochester:
They’re extremely motivated especially when they’re playing us, they bring their game every time. It’s up to us to match and exceed that.

On Mason Marchment’s return to the line with Adam Brooks and Jeremy Bracco:
It’s been awhile since he got himself into a game and he’s had some success with those guys so we wanted to get him with some familiar line mates and get him feeling good. I think as the game wore on, they were like everyone else, they got a bit better and more into it so hoping this weekend, everyone brings everything right from the get go.

The Toronto Marlies are back in action tonight, making a quick stop in Rochester, New York for a meeting with the Americans.

These north division rivals met less than a week ago when the Marlies edged the Amerks 3-2 in overtime in their first meeting this season. Pontus Aberg potted the overtime winner in that game, and continues to lead the Marlies in points this season. Tanner MacMaster has been on a roll, picking up a point (4-5-9) in each of his last nine games. The Marlies are 7-1-2-1 against North Division opponents this season and 1-0 against the Americans.

The Americans have been buzzing lately and enter tonight’s game with an 8-0-1-1 record in their previous 10 contests. Andrew Oglevie leads the Amerks with 16 points (9 goals, 7 assists) through 20 games this season. He’ll be looking to keep a seven-game point streak (7-3-10) alive tonight.

An important two points will be up for grabs tonight as only 3 points separate these two teams in the north division standings (Rochester has a game in hand). Puck drops at 7:05 PM on AHLTV. Fans can also follow along on Twitter (@TorontoMarlies) for game updates.