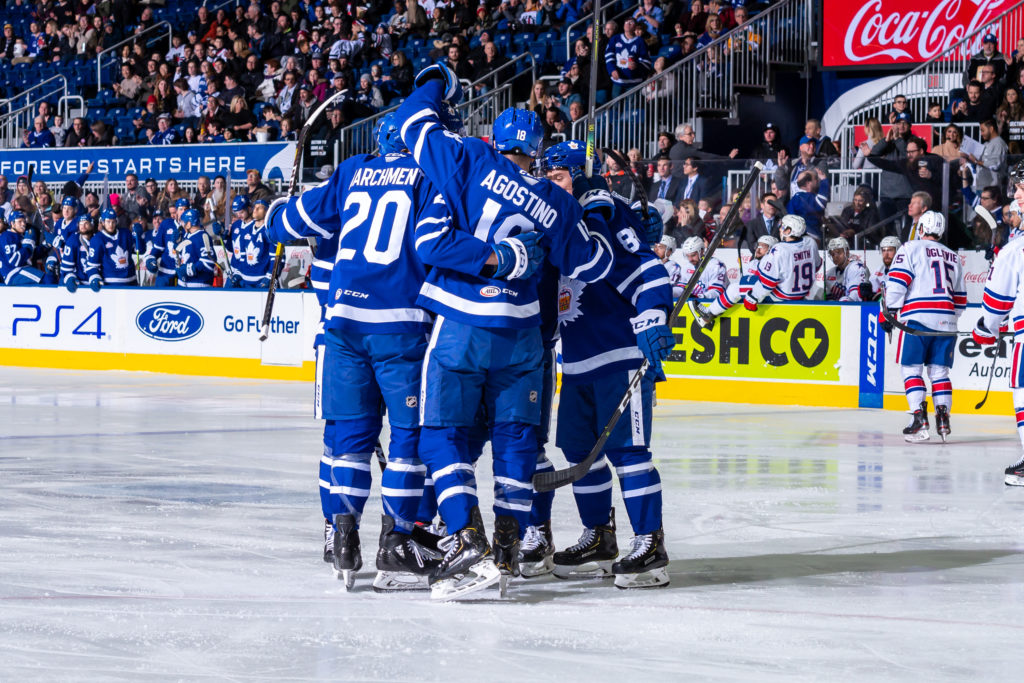 The Marlies were back on home ice today to host the Rochester Americans for their second of three divisional matchups this weekend.

Looking to rebound from last night’s loss, the Marlies had some extra energy right from the opening puck drop. The early pressure paid off as Mason Marchment and Nic Petan connected just 52 seconds in to get things started early in the first period. Petan sent a backdoor pass to Marchment who beat Rochester goaltender, Andrew Hammond with a one-timer. This was Marchment’s fourth goal in two games, with Petan picking up the primary assist on all four. Rochester tested Joseph Woll often in the opening 20 minutes, but the Marlies netminder stood tall, turning away all 17 shots he faced to preserve a 1-0 lead for Toronto heading into the first intermission.

The Marlies held their one-goal lead through the majority of the second period and limited the Americans to only six shots on goal. A penalty to Eric Cornel late in the frame would cost the visitors as Marchment struck again, tipping in a shot from Kenny Agostino to put the Marlies ahead 2-0. Joseph Duszak picked up the secondary assist on Marchment’s fifth goal in two games.

Rochester peppered Joseph Woll with 15 shots in the final frame as they looked to get on the board and cut the deficit. The Marlies’ netminder was up for the challenge and stood tall between the pipes. Matt Read and Joseph Duszak each added an empty net goal late in the frame to seal a 4-0 victory for the Marlies. Woll picked up his second shutout of the season and earned himself first star honours with a 38-save effort.

The Marlies will close out their three in three tomorrow when they host the Laval Rocket for a 4:00 PM start at Coca-Cola Coliseum.

On today’s start with Marchment scoring 52 seconds into the game:
Yeah, that’s something that we had struggled with in the stretch here. You could tell the energy in the locker room. The guys were excited to play tonight, they can feel the momentum they’re starting to gain in games. Even though the results haven’t been there, they’re very proud of the work they’ve put in. The start was great. It was a good opportunity for us to come out and gain some momentum.

On what he likes about Nic Petan’s line with Kenny Agostino and Mason Marchment:
Just their compete level. They seemed to build some chemistry. Marchment builds a lot of time and space for guys. He gets under the skin of the opponent and that opens up time and space for Kenny and Petey to make plays and I think there’s a good combination of skill there.

On the shutout helping Joseph Woll’s confidence going forward:
Huge. He came up big tonight. You could just tell his body language was really calm, he was assertive, he was tracking the puck really well. It was a solid game for him.

On Adam Brooks not dressing and Nic Petan leaving the game:
We’ll see. No real status or timeline on either of them. Nothing major but we definitely miss those guys if they’re not in our lineup, they’re big players. But we’ll see in the future.

On Kevin Gravel’s play today (first game since Nov. 9):
I was really surprised. That was my first opportunity to even watch him play in a game. It’s been a long road, we’re really proud of the work he’s put in. He’s a great person. For the team to get a win, for him to play the way he did, to get the minutes he did, is a really fun story to see and we’re really proud of him.

On his first game since Nov. 9:
It was good. It was good to get back out there. It was another game of the year for a lot of guys but for me, it kind of meant a little more. Kind of in an unknown position there for a while in terms of health so you don’t really know what’s going to happen. It felt good to be out there and then to contribute to the team and be back on the ice to play a game again.

On not playing through a difficult stretch of games for the Marlies:
Yeah it’s hard to watch. Obviously you want to be there for the guys and you want to be able to work through that with them and help the guys out. You’re close as a team and you go through the good times together and you go through the bad times together. You can ask anyone, they don’t like watching, whether it’s one game or three months. It’s always tough to be on the sidelines. It was good to get back, it was good to be on the ice again.

On Joseph Woll’s performance:
It was really good, really good. Especially the first period there, they had close to I think 20 shots on goal in the first. Kind of bought us a little bit of time there and let us get a chance to get our feet underneath us. We got the lead there and he made a couple of ten-bell saves for us on the PP and the PK as well. He was great for us. It’s good to be able to shut the door for him and get him that shutout and have his back there too.

On the significance of today’s shutout:
I think it was big for me but I think it was really huge for the team. I think we’ve been on a little bit of a downward spiral lately so I think a big win like that against a good team is something we can really build on.

On how he has stayed focused through difficult games:
I think the biggest thing is keeping with your routine. I think it’s easy to start changing a lot of things when you’re going through some adversity but for me and for the team it’s just been come in every day and keep getting better and sticking with it.

On Mason Marchment:
He’s been awesome. He’s one of those players that you love to have on your team and probably hate to play against so he can do it all really. He’s scoring a lot of big goals for us, he’s creating some havoc around the net. I love to see it.

The Marlies return to home ice today in a quick turnaround from last night’s loss in Belleville.

Toronto will be looking to bounce back at home today as the team continues to find consistency and right the ship down this stretch of divisional matchups. The Rochester Americans saw a six-game winning streak snapped last night in a 5-2 loss to the Syracuse Crunch. They come into today’s game with six wins in their past 10 contests.

The Marlies have dropped their previous three matchups and currently sit three points back from the final playoff spot in the North Division. Despite the recent slide, the Marlies continue to show signs of improvement in 5-on-5 play and will need to find a way to dig in here and start stringing together some wins. “There were again moments of the game we controlled,” said Greg Moore following last night’s 7-4 loss to Belleville. “At this point, it’s really frustrating, it’s difficult. We need to start seeing results.” “Every game’s a learning experience,” he continued. “Every game at some point we have to put behind us. We’ve got to chisel away at getting better. I do think if we look at our segment of games, last six, seven games, there has been better hockey played. We’ll continue to trend, we’ll continue to get better and we’ve got to find a way to go on a run.”

Puck drops at 4:00 PM today on Leafs Nation Network and will be streamed live in the Maple Leafs app. For fans attending today’s game at Coca-Cola Coliseum, please note Marlies Alley will be closed today for a private event.