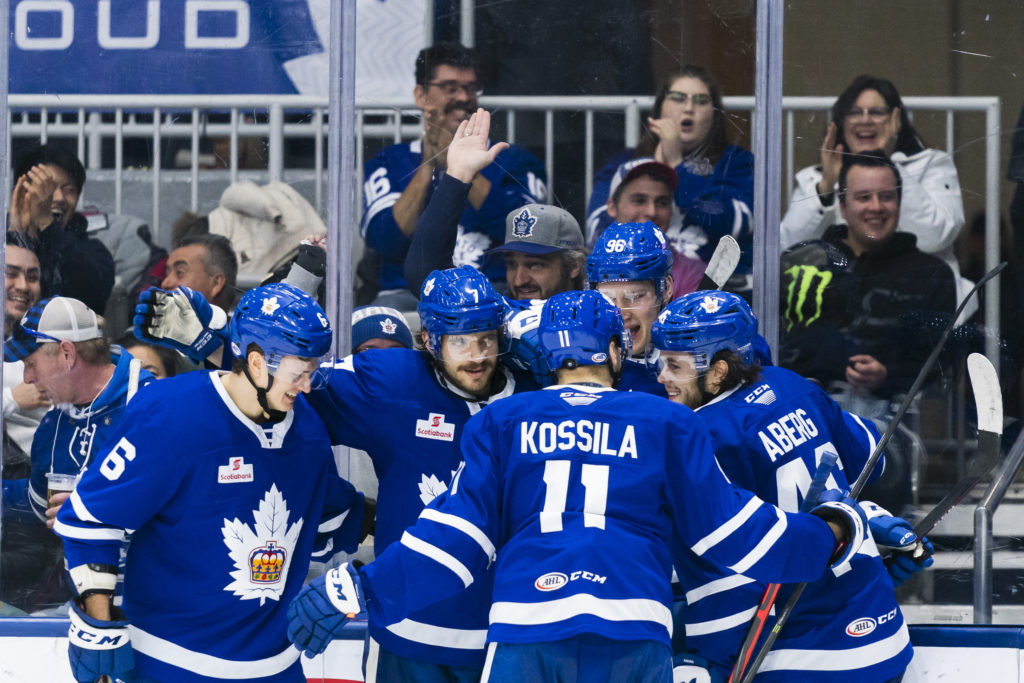 The Marlies got back to their winning ways on Saturday, picking up a big 5-2 win over the division leading Rochester Americans. The win snapped a three-game losing skid for the Marlies as they improved to 20-11-2-1 on the season and 13-5 on home ice.

Kalle Kossila opened the scoring at 12:36 of the first period wiring a shot from the slot off a pass from Jeremy Bracco. Two minutes later, Kenny Agostino wired a rocket one-timer top shelf to finish a pass from Pontus Aberg to make it 2-0. The Amerks solved Kasimir Kaskisuo at 18:24 to cut the Marlies’ lead in half heading into the first intermission.

Kossila restored the Marlies’ lead at 11:24 of the third period with his second of the game. Jesper Lindgren picked up the assist on the goal. At 13:27, Teemu Kivihalme and Pontus Aberg converted on a give and go as Aberg redirected the puck past Andrew Hammond to put the Marlies ahead by two. Just over a minute later, Egor Korshkov fired a shot top shelf to give Toronto a three-goal cushion. The Marlies held on and Kaskisuo turned away all eight shots he faced in the third period to seal a 5-2 win for the Marlies.

Toronto closes out their 3-in-3 weekend tomorrow as they host the Lehigh Valley Phantoms for a 4:00 PM start.

On the message to Toronto following Friday’s loss to Syracuse:
Put that behind us. After a game like that you can’t let it leak into your future games. We just had to make sure that we set a new tone, had a new expectation of how we wanted to do things and get back to what I’m sure this team has done a lot this year.

On how he felt about the play of today’s lineup:
I was happy with everybody. I thought the reason we had success today was because the entire team was going and every line contributed in some different way. We’ll need that moving forward.

On Toronto not taking a penalty in today’s game:
That was really important. We’ve been killing a lot of penalties lately. Some calls could go one way or the other, and some just really stupid decisions we’d been making and it was really good to see our discipline tonight.

The Marlies have a tough battle ahead today as they get set to host the north division leading Rochester Americans. The Marlies are fresh off a tough 8-2 loss to the Syracuse Crunch, and will be looking to rebound and crack a three-game losing skid in a quick turnaround today.

This is the third meeting between these division rivals. In their last meeting, the Americans evened up the season series, blanking the Marlies 4-0 in Rochester. The Americans have been red hot and are coming off a 4-3 win over Belleville last night. With six wins in their past 10 games, the Marlies will have their work cut out for them against a tough Rochester team.

The Marlies will be looking to regroup in their last weekend at home before heading out on their annual boat show road trip. The Marlies have struggled to find a groove lately with only three wins in their past 10 games. They’ll have home ice on their side today, which has been an advantage for the Marlies this season as they’re 12-5-0-0 when playing in Toronto.

This is the first of four Next Gen games for the Marlies, with a special bobblehead giveaway for fans attending today. The Next Gen games tell the story of our future players, fans and game changers.The first 3,000 fans through the gates will receive a limited-edition Andreas Johnsson bobblehead. To learn more about Next Gen, visit: marlies.ca/nextgen

Puck drops at 4:00 PM on Leafs Nation Network. Fans across Canada can also stream the game live in the official Maple Leafs app.