IceHogs Double up on Marlies 4-2 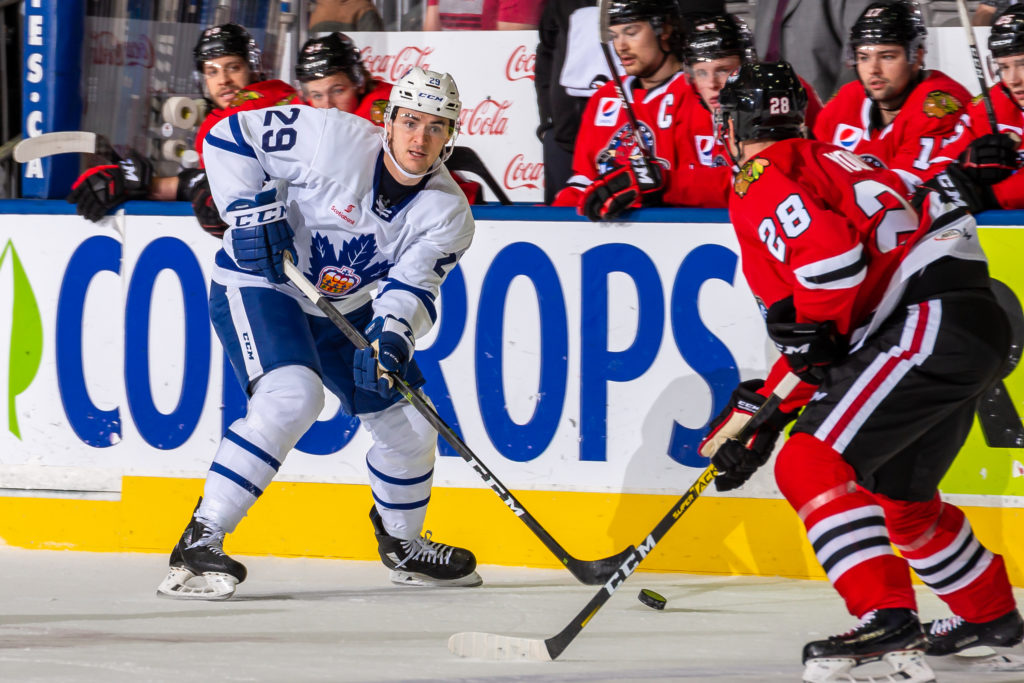 The Marlies suffered their third straight regulation loss on Sunday, falling 4-2 to the visiting Rockford IceHogs.

Rockford set the pace early on in today’s contest, taking a 1-0 lead at 5:41 of the first period. Rich Clune evened the score 1-1 at 14:14 of the first period, out waiting IceHogs’ goaltender Kevin Lankinen before firing the puck into the back of the net for his second of the season. Jordan Schmaltz and Kristians Rubins assisted on the goal. Rockford regained the lead two minutes later to make it 2-1 heading into the first intermission.

The Marlies answered back early in the second period as Matt Read found Adam Brooks alone in front of the IceHogs’ net and Brooks roofed the puck in over Lankinen’s shoulder to make it 2-2. The IceHogs were quick to respond again as they converted on a power play opportunity at 7:56 of the middle frame. The Marlies found themselves down by one for a second time after 40 minutes of play.

The third period saw a lot of back and forth action as the Marlies looked to turn things around. Toronto killed off two penalties in the final frame to keep Rockford from extending their lead, but struggled to generate offensive chances. Late in the frame and looking to force overtime, the Marlies pulled Kaskisuo from the goal to make way for an extra attacker. Unfortunately the IceHogs gained control of the puck and found the empty net to seal a 4-2 victory.

The Marlies will have a week to rest and regroup before heading to Belleville on Saturday for their final game before the holiday break.

On the losses this weekend:
I just think we didn’t generate enough chances or anything to the net, really. Our lack of quality in the attack in the third was pretty much our demise for the weekend.

On special teams:
I thought the power play looked good today. They were moving it around. There was good movement of the puck and our bodies. But it was the same as what we talked about five-on-five. We just need to generate a few more shots to the net and that’ll be the message going into next week.

On what kind of player Team Sweden will get in Rasmus Sandin at the World Juniors:
A terrific one. He’s smart, moves the puck well, he can skate and defend. I’m looking forward to seeing how he does.

On what he hopes to see out of Sandin’s performance at the World Juniors:
I hope he dominates. I hope he does really well and he gets to play with the puck and he has a lot of success. He already has good confidence, but it would be good if he came back with a nice swagger and just kept things rolling.

The Toronto Marlies are back in action today to host the Rockford IceHogs for their final home game before the holiday break.

The Marlies picked up their first loss at the Coliseum yesterday, dropping a 4-1 decision to the visiting Belleville Senators. Toronto’s home record is 12-2-0-0 and they have outscored their opponents 54-34. They’ll be looking to crack a two-game losing streak and even up the regular season series against Rockford today. The IceHogs handed the Marlies their first regulation loss of the season back on November 6th in a 3-1 final.

The IceHogs are also coming off a loss to Belleville, falling 5-2 to the Senators on Friday. They’ve had a day of rest and will be looking to bounce back as they visit the Coliseum for the first time since the 2014-15 season. The IceHogs are 6-3-0-1 in their previous 10 games and currently sit in third place in the Central Division and fifth place in the Western Conference.

Puck drops at 4:00 PM on Leafs Nation Network. Fans across Canada can also catch the game on the go with the Marlies livestream in the Official Maple Leafs App.