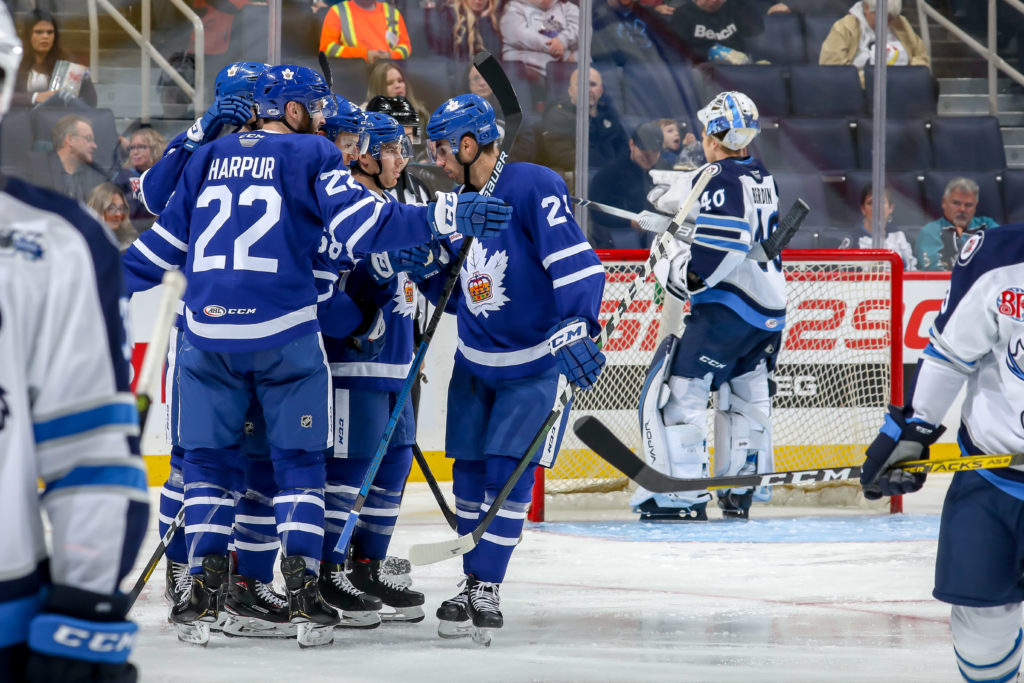 The Marlies closed out their doubleheader in Manitoba with a 4-0 win over the Moose.

Pontus Aberg opened the scoring in the final minute of the first period after burying a rebound off a shot from Pierre Engvall. Timothy Liljegren picked up the secondary assist on the opening goal and the Marlies held a 1-0 lead heading into the first intermission.

Pierre Engvall scored the second goal of the game at 7:05 of the second period to give the Marlies a two-goal cushion. Nick Baptiste fired a shot from the point that came off the pads of Adam Carlson, and Engvall buried the rebound through the five-hole. Jordan Schmaltz had the secondary assist on the goal. Aberg struck again at 10:48 when Baptiste delivered a pass through the blue paint right on the tape of Aberg’s stick and he made no mistake beating Carlson for his second of the game. Engvall had the secondary assist on the goal. The Marlies lead 3-0 heading into the final frame.

Early in the third period, Egor Korshkov notched his third goal in consecutive games, capitalizing on a shorthanded breakaway to make it 4-0. The Marlies held their lead for the rest of the period for their third straight win.

With 23 saves on the night, Joseph Woll becomes the first rookie Marlies goaltender to post a shutout in his first start.

The Marlies return home on Wednesday, October 16th to host the Hershey Bears for a 7:00PM start at Coca-Cola Coliseum.

On Joseph Woll’s first start and shutout:
I thought he was really good. We didn’t give up a great deal but he looked really confident back there, moved very well. Not just the saves but how he handled anything that came his way, puck handling, all of that stuff. Certainly, didn’t look like a guy in his first game so that’s a really good sign for us in terms of the confidence that he has. Coming out of this weekend feeling pretty good about goaltending.

On Pierre Engvall’s line of Pontus Aberg and Nick Baptiste:
Baps stepped in on that line. Wilson was only cleared to play one of the two games here for this weekend. We’re kind of easing him back into it but Baptiste filled into that line nicely this weekend. Engvall and Aberg have been very good. Aberg was real fun to watch out here today, he was pretty dialed in and clearly, they were difference makers for us offensively as we would expect them to be. It was nice to see it happen

On nerves going into the game:
I think naturally you’re a little bit nervous. It’s a first experience playing professionally for me in the regular season so little bit of nerves but I think once you make your first save, you settle in so it kind of goes away.

On the game overall:
It was awesome to see after a big win yesterday the guys respond the way they did. Sometimes teams can kind of hold back on the second game but we really took it to them again and executed well and I didn’t see a whole lot so it was a pretty good testament to the boys.

On the shutout crossing his mind during the game:
I think it does naturally but as a goalie you just kind of want to let that thought out of your head. It’s something that hopefully doesn’t crowd your mind too much and you just go with the flow.

On the Marlies this season:
It’s a special group of guys. It’ll be awesome to see how we really come together and move through the season. I couldn’t be more excited.

The Marlies and Moose close out their back-to-back mini series today in a Saturday matinee at Bell MTS Place in Winnipeg.

With a win over the Moose last night the Marlies made it two straight to start out the season, while the Moose dropped their second of three games. They’ll be looking to pick up their first win on home ice today in what’s bound to be another close fought battle.

After recording the first goal in consecutive games, Egor Korshkov leads the Marlies in goals, while Jeremy Bracco leads in points with four assists through two games. Tyler Gaudet scored the game-winning goal at 1:44 of the third period on a delayed penalty. Last night marked Gaudet’s 300th career AHL game and his fifth game-winning goal. Toronto was 3-for-3 on the penalty kill and was 0-for-3 on the power play.

“We’re just continuing to learn,” said head coach Sheldon Keefe following yesterday’s game. “It certainly was not a complete game by any means by us. But we found a way to win again, there were a lot of good things in the third period that we’re going to have to build on for tomorrow.”

The Marlies will look to extend their streak to three straight and head home for Thanksgiving.

Puck drops at 3PM ET on AHLTV. Fans can also follow along on Twitter for live updates.