Marlies Double up on Moose 4-2 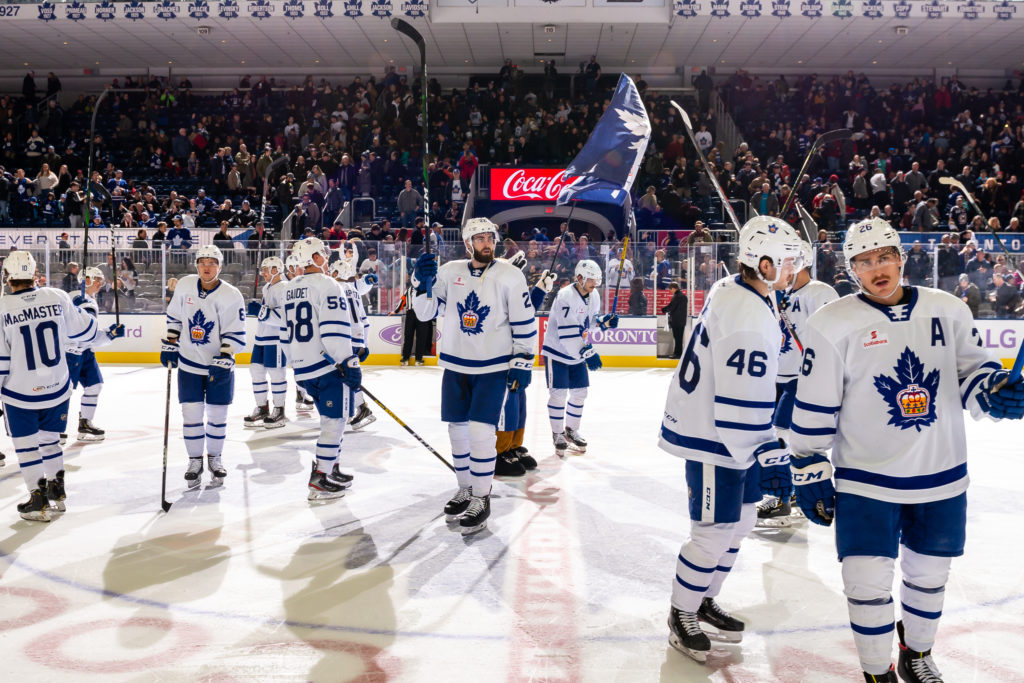 The Marlies picked up their eighth straight win at home and improved to 12-2-2-1 on Saturday, doubling up on the visiting Manitoba Moose 4-2.

Adam Brooks opened the scoring early in the second period, burying a rebound off a shot from Ben Harpur. Kenny Agostino picked up the secondary assist on the goal. At 15:32 of the middle frame, Matt Read put the Marlies ahead 2-0 with his third of the season. The goal came on a delayed penalty as Read finished off a pinpoint passing play from Tyler Gaudet and Teemu Kivihalme. Toronto held a 2-0 lead through 40 minutes of play.

The Marlies carried the momentum into the third period and came out with two goals early in the frame to jump ahead 4-0. Timothy Liljegren scored just 58 seconds into the period, one-timing a loose puck in the slot past Mikhail Berdin. Tanner MacMaster and Egor Korshkov recorded the assists on Liljegren’s goal. Exactly a minute later, Garrett Wilson notched his fifth of the season sneaking in a wraparound goal. Gaudet and Pontus Aberg assisted on the goal. The Marlies held their 4-0 lead for a good chunk of the frame until the Moose solved Michael Hutchinson at 8:52. They added a second goal at 9:19 of the third period to cut the Marlies’ lead in half, but were unable to capitalize in the second half of the frame as the Marlies came away with the two points.

Michael Hutchinson made 32 saves to pick up his third win in as many starts. Hutchinson has a 1.95 goals against average and a 0.942 save percentage.

The Marlies and Moose close out their four-game regular season series tomorrow at Coca-Cola Coliseum. Puck drops at 4:00 PM on Leafs Nation Network.

On today’s game:
I think the guys were very focused. We talked about it coming in that they were the hottest team in the league and it was going to be a challenge. And I thought everybody, to a man, was up for it.

On Michael Hutchinson’s performance through three games (92/98 saves):
Your goalie’s always important. Hutchy’s done a good job since he’s been here of just staying focused and any time we have any type of breakdowns he’s been standing strong for us.

On breaking down Manitoba’s transition play:
They’re a dangerous team. They can break the puck out well and if you turn it over, they have a lot of speed. With any team that’s a dangerous way to play is if you turn pucks over. Guys were really focused on the plan we wanted to have and they executed it well.

On a physical performance from his line with Tyler Gaudet and Matt Read:
We just try to play good defense and usually that leads to offense. Gaudet and Read have been around the game a lot. They know how to be responsible with the puck and when the right time to make plays are. We’re kind of feeding off of each other, building some chemistry, so it’s a lot of fun playing with those guys.

The Toronto Marlies return to action today to host the Manitoba Moose for their first of back t0 back games this weekend at Coca-Cola Coliseum.

The Marlies and Moose met early in the season when Toronto visited Winnipeg for a back to back weekend in October. The Marlies came away with a 2-0 lead in the four-game season series after winning both games (4-0 and 3-2). Both teams will be looking to keep winning-streaks alive today as they meet for the third time this season.

The Moose are coming in hot, riding the high of seven straight wins and only one loss in their previous 10 games. Moose forward, Jansen Harkins has been on a tear and enters this weekend on a 10-game point streak (3-15-18). Harkins sits sixth in league scoring with 21 points in 18 games played. The Moose currently sit in fourth place in the Central Division and fifth in the Western Conference.

The Marlies enter the weekend with four straight wins and a 5-2-2-1 record in their previous 10 contests. Toronto has been perfect at home this season with seven straight wins at Coca-Cola Coliseum. The Marlies are first in the North Division and second in the Eastern Conference. After notching the overtime winner in Wednesday’s game against Laval, Kenny Agostino now leads the Marlies in goals with nine. Pontus Aberg leads the team in points (16) and Jeremy Bracco has the team lead in assists (12). Tanner MacMaster has points (1-3-4) in four consecutive games.