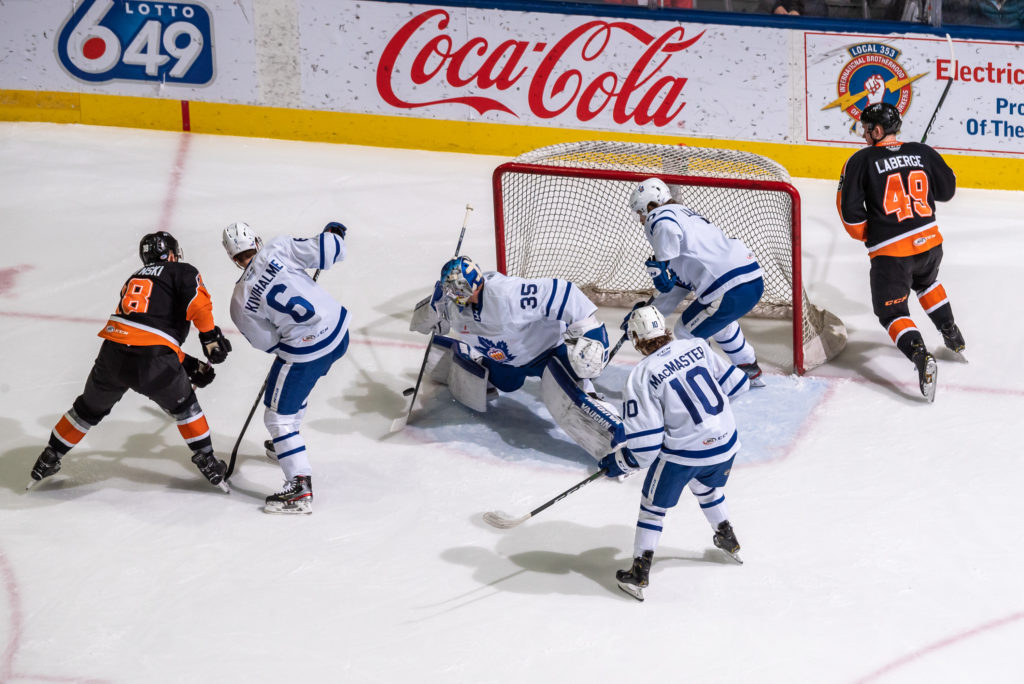 The Toronto Marlies closed out their 3-in-3 today with a 4-2 loss to the visiting Lehigh Valley Phantoms.

The visitors tested Marlies’ goaltender, Joseph Woll early and often in the opening 20 minutes, firing 15 shots on goal. Their pressure paid off and Toronto found themselves in an early hole as Lehigh jumped out to a 2-0 lead after 20 minutes of play.

The Phantoms outshot the Marlies 10-8 in a scoreless second period and held their 2-0 lead through 40 minutes of play.

An early goal in the third put the Marlies down by three, but Timothy Liljegren found the back of the net shortly after to get the home team on the board. Liljegren carried the puck from his own zone and passed it off to Tyler Gaudet  for a give and go and he made no mistake burying it for his fourth of the season. The Marlies continued to press, and the home crowd became engaged, hoping the goal would spark a comeback. At 15:33, Giovanni Fiore buried a one-timer off a seam pass from Liljegren to bring the Marlies within one. Late in the game the Marlies pulled Woll in favour of an extra attacker as they aimed to even things up. Toronto couldn’t maintain possession and gave up an empty net goal at 19:36 as Lehigh sealed a 4-2 win.

The Marlies will head out on their annual Toronto Boat Show road trip on Thursday as they get set for another 3-in-3 weekend in Texas.

On today’s game:
They were hard and heavy. They definitely had some energy. They kept it simple, they just got pucks in behind our D, made it tough on us to have to get out of our end. We came up a bit short tonight. Although they made it difficult on us and the result was not what we wanted, I still thought there were some pieces of our game that are still moving in the right direction. These guys have gone through a lot in the last month and a half within the chemistry of the team and some changes. I think naturally these things happen where they might feel like they’re going through a process. I’m happy right now with what the process is. We have the right guys in the room, they’re saying the right things, they’re doing the right things. Again, tonight the result wasn’t there but I’m excited about what the next few weeks will hold for this group.

On what he expects from the upcoming Boat Show road trip:
Simple road hockey, I guess. I think it will be a good time on the road for me to spend more time with the team and get to know more guys individually and continue to build those relationships, I think it’s very important. I think if we have the right approach and the right mindset within this road trip, we can gain some momentum for our club.

On Joseph Woll:
Yeah, in the second period he really kept us in it. We had a hard time again, like yesterday in the second period, coming out of our end. Second period is just a different period, your line changes are further away. We have to manage those things a little bit better, we’ll learn from that. He definitely gave us a chance to win tonight.

The Toronto Marlies close out a 3-in-3 weekend today as they host the Lehigh Valley Phantoms for their final home game before the annual Toronto Boat Show road trip.

The Marlies cracked a three-game losing skid yesterday with a convincing 5-2 win over the visiting Rochester Americans. Kalle Kossila potted two goals in yesterday’s win, including the game winner at 11:24 of the third period. Kossila also had the primary assist on Korshkov’s third period goal. It was his eighth career three-point game. Kossila has five points (3 goals, 2 assists) in seven games this season.

The Lehigh Valley Phantoms have struggled lately with only two wins in their past 10 contests. They’ll be looking to snap a six-game losing streak today as they also close out a 3-in-3 weekend. The Phantoms dropped a 5-3 decision to Belleville yesterday, and were blanked 4-0 by Laval on Friday night.

This is the first of two meetings between these two teams this season. The Phantoms swept the two-game series last season, but are 4-2-1-1 against the Marlies over the past five years.