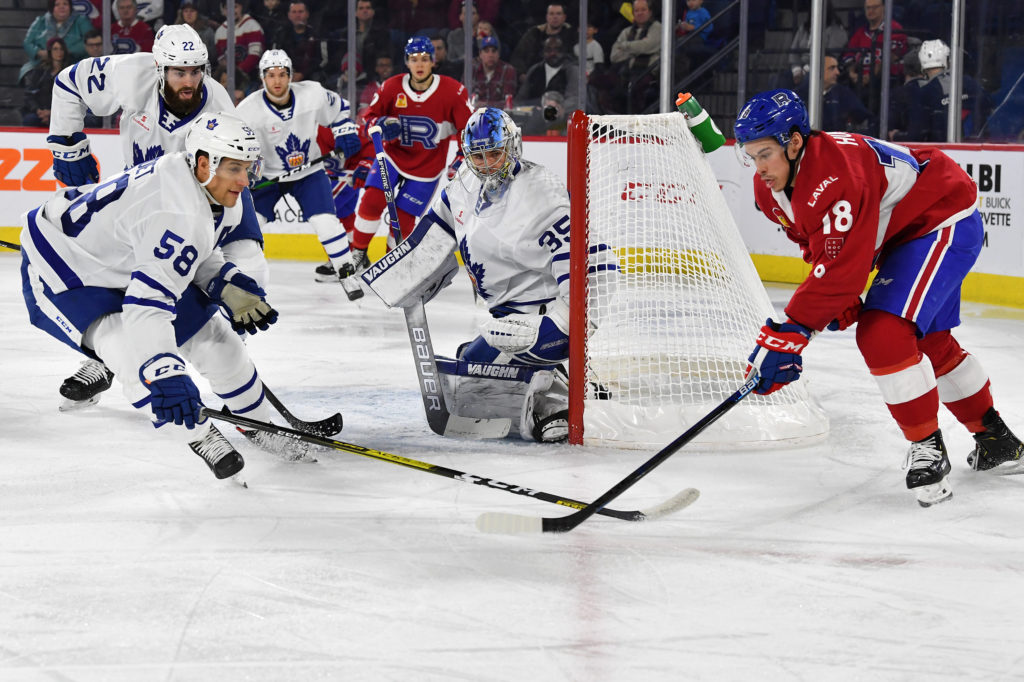 The Marlies closed out their 3-in-3 on Sunday with a tough 6-1 loss to the Laval Rocket. The home team came out firing in the first period with 16 shots on goal in the opening 20 minutes. They found the back of the net twice to jump out to a 2-0 lead. Teemu Kivihalme scored the lone goal for Toronto at 17:21 of the first period on the power play. Jeremy Bracco and Nic Petan recoreded the assists on Kivihalme’s third of the season. It was the Marlies’ ninth power play goal in their last seven games.

The Rocket added four unanswered goals, three in the second and one in the third, to seal a 6-1 win and improve to 16-14-3-1. Joseph Woll stopped 18 of 23 shots he faced before being replace by Kasimir Kaskisuo midway through the second period. Kaskisuo stopped 14 of 15 shots he faced.

The Marlies will have a few days off to prepare for their game against the Cleveland Monsters on New Years Eve at Coca-Cola Coliseum.

On today’s game:
I thought we really let down our goaltenders today. We know they like to shoot heavy from the point. We weren’t strong enough out front. We didn’t protect our goaltenders, our most important guys on the ice. Didn’t get underneath hands, they got some tips, rebounds inside of us, they were behind our D. Forwards need to do a better of job of getting tight, staying in lanes, wanting to block shots. They’re a hard, heavy team. I didn’t think our start was as good as it needed to be. Our first periods have been problematic from what I’ve seen since I got here so we just have to have some discussion, make sure we correct some things and move from there.

On the power play:
It was a little slow and deliberate. They’re taking their time, they’re making the PK feel comfortable and easy. It’s got to be full throttle, shot, puck recovery, 1-2 pass, shot, puck recovery. We don’t make the penalty kill feel uncomfortable. We need to play a little bit faster and we’ll work on it, we’ll get things going.

The Marlies and Rocket are back in action today for the second half of a back-to-back in Laval.

Toronto took a 2-1 lead in the regular season series following a 3-2 win over the Rocket yesterday.  All of the scoring in yesterday’s contest came in the second period with the Marlies scoring their three second period goals in 59 seconds, including their fastest consecutive goals of the season (23 seconds – P. Aberg, K. Kossila). Toronto was 3-for-4 on the penalty kill, 1-for-1 on the power play and Kasimir Kaskisuo picked up his 10th win of the season with a 32-save effort.

Following yesterday’s game, head coach, Greg Moore gave credit to the Marlies’ defence, commenting “overall, our D-corps had a much better game today. They really steered the ship for us and they kind of got things going in the right direction. When we transition the way we can at times and they’re leading that for us, we’re a hard team to beat.”

The Marlies will look to build off yesterday’s game and head home on a high note to prepare for their New Years Eve matchup against Cleveland. Puck drops at 3:00 PM today on AHLTV.