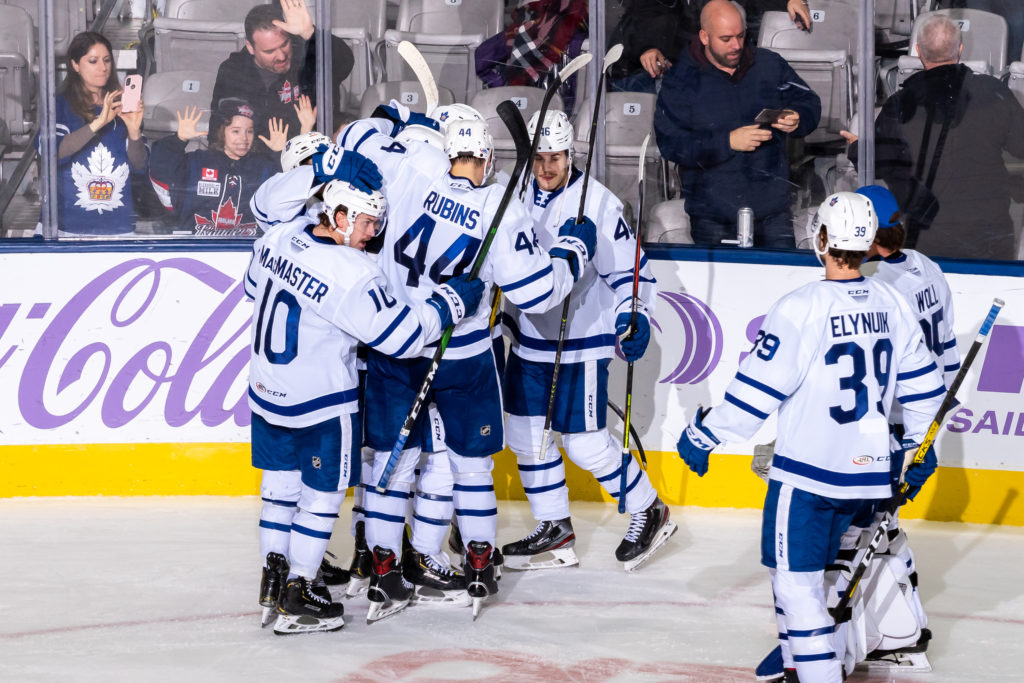 Laval opened the scoring midway through the first period and peppered Marlies’ goaltender, Michael Hutchinson with 11 shots on goal in the opening frame.

Scott Pooley got the Marlies on the board at 3:03 of the second period to tie the score up 1-1. Pooley scored his first goal in his first game for the Marlies this season, wiring home a one-timer from the hashmarks from Tanner MacMaster and Ben Harpur.  The score remained locked 1-1 after 40 minutes of play.

The Marlies saw their first power play opportunity at 7:25 of the third period, but were unable to capitalize on the man-advantage. 3-on-3 sudden death overtime would be necessary with the score still tied at the end of regulation.

Kenny Agostino provided the overtime heroics with only 25 seconds left in extra time to lift the Marlies to a 2-1 victory and extend their home win streak to seven straight.

Toronto will be back in action this weekend to host the Manitoba Moose in back-to-back games at Coca-Cola Coliseum.

On the emotions around the team with the announcement of Sheldon Keefe as head coach of the Maple Leafs:
For me personally, (Sheldon) means everything, to my career. Along with my father and Kyle Dubas, they’re the people who’ve really groomed me to be where I am. Once I got done playing they took a chance on me in the Soo and every step of the way he’s been an incredible mentor and basically a big brother to me through life and through coaching. For here with the development of all the Marlies, he’s been absolutely incredible. He genuinely cares about every player that’s come through here. He puts a lot of time and effort in to make sure that each and every player has an opportunity to reach their maximum potential, and that’s our day-in and day-out process, is to try and get the players to their potential.

On if he spoke with Keefe following the announcement:
Briefly, just as a group (chat) we have, not one-on-one. But we got to talk to him a bit when the news came to us and we wished him all the best and told him how proud we are of him. We’re looking forward to watching him go.

On the benefits of giving personal attention to each player:
I think you just know if somebody cares about you, you go through a wall for them, and that’s what you see almost all the time here with the Marlies. The guys go through the wall for him. They really want to get better because us as a staff really want to see every player reach their potential and it all starts with him.

On today’s win against Laval:
I mean obviously we knew that today was a crazy day and we knew going into this game that we didn’t want to use it as an excuse. We still have a great leadership group in there and we’re still led by two great coaches. We knew what we needed to do heading into this one and thanks to Kenny and a great play by Hutch, we were able to come out of there with the win.

On what Sheldon Keefe meant to his development:
He was huge. I was very fortunate to play under Sheldon for parts of three years now. When I came into the league it was a huge adjustment for me, probably a little harder than I thought it was going to be and he was there the whole way. He’s a great coach, he always tells you exactly what he wants from you and when he sees that your game’s not going the way he wants it to be, he straightens it out and shows you the things that you’re doing wrong. I can’t thank him enough for everything he’s done for us and the development that he’s done for so many guys that you’ve seen made that jump to the NHL. With a few more going this year already, it just shows what kind of coach that Sheldon Keefe is.

The Marlies and Rocket meet tonight for their second of eight meetings during the 2019-20 regular season.

The Marlies returned from their annual Royal Road Trip last weekend and kept their home winning-streak alive with back-to-back wins over the visiting Texas Stars. The Marlies have now won six straight on home ice and sit in first place in the North Division and second place in the Eastern Conference. When asked about the team’s success on home ice, Marlies head coach Sheldon Keefe commented “no matter where we are, we have to pick up points. We’ve had a good start to the season here for sure, but you look around in the division and there’s a lot of really good hockey teams in our division, and they’re not all going to make the playoffs. So, it’s going to be a battle all the way through.”

That comes in to play tonight in an important divisional matchup against Laval. With only one point separating these two teams in the North Division standings (although, the Marlies have three games in hand), both teams will be looking to come away with a crucial two points. In their previous meeting this season, the Rocket edged the Marlies 6-5 in a shootout in Laval to take a 1-0 lead in the season series. Since then, the Rocket have picked up three wins to improve to 10-6-2-0 on the season. Laval sits third in the North Division and sixth in the Eastern Conference, and they continue to boast one of the league’s top penalty kills (92%).

The Marlies were 7-2-1-0 against the Rocket last season and are 9-2-0-0 over the last five years when visiting Laval.

Puck drops at 7:00 PM on Leafs Nation Network. Fans across Canada can also stream the game live in the Official Maple Leafs App.