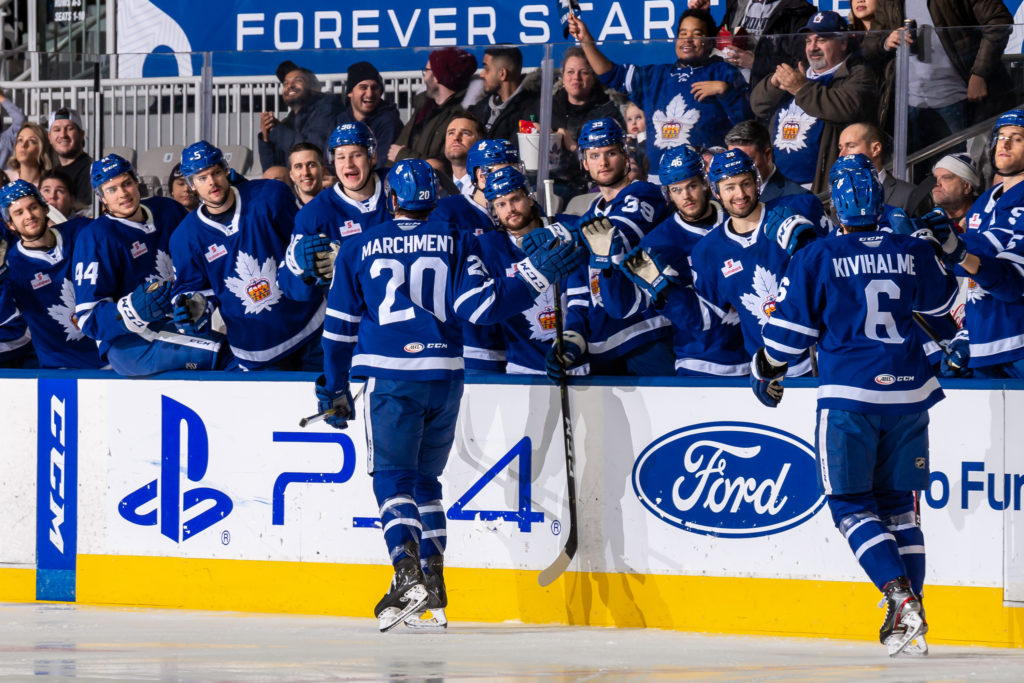 The Marlies closed out the weekend with back to back wins after taking down the Rocket 5-2 on Sunday.

Similar to yesterday’s game, Mason Marchment got this started early and continued his hot streak, scoring his sixth straight goal just 49 seconds into the game. Teemu Kivihalme and Adam Brooks recorded the assists on the opening goal. Egor Korshkov extended Toronto’s lead to 2-0 at 5:56 after Joseph Duszak sent him in alone on Keith Kinkaid where deked out the Rocket netminder to bury his 12th of the season. Kenny Agostino had the secondary assist on the goal. At 11:32, Kristians Rubins launched a shot from the top of the circle past Kinkaid to give the Marlies a three goal cushion. Giorgio Estephan and Pontus Aberg assists on the goal. Just over a minute later, the Rocket responded to cut the deficit to 3-1. Shots on goal in the opening frame were even at 10 apiece while the Marlies held a two-goal lead through 20 minutes of play.

The second period was fairly uneventful as the two teams combined for only eight shots on goal. The Marlies killed off three penalties in the frame to preserve their 3-1 lead.

At 2:39 of the third period the Marlies would head back to the penalty kill as Mac Hollowell was called for slashing. 10 seconds into the penalty, Matt Read went for a skate before wiring a backhanded shot past Kinkaid to put the Marlies ahead 4-1. Michael Kapla picked up the primary assist on the shorthanded marker. At 15:41 of the final frame, the Rocket crept back within two with a goal from Matthew Peca. The visitors pulled Kinkaid late in the frame in an attempt to further close the gap, but Pontus Aberg found the empty net from his own zone to seal a 5-2 victory for Toronto.

The Marlies will be back in action on Friday to open a home and home with Belleville.

On the team grabbing four of six points this weekend:
We’re very happy. The team is starting to see the results of the work and labour they’ve been putting in for the last few weeks. Things have been coming along and they found another way to play for sixty minutes. Our D corps was great tonight. Really solid, really good gaps, played well from the middle of the rink, we didn’t give up a ton. More importantly in the D zone we were really strong closing out and stalling them out not allowing them to go low to high using their point shots, which is a big part of their game.

On wins from their goaltenders:
We’re going to need both of those guys to be on their game to have a good push here for the rest of the season. Kas came in, played a heck of a game, kept us in it. Looked really confident, looked really calm in net and when you have a goalie showing those signs it gives confidence to the team to play well.

On scoring six goals in three games:
Couple of lucky shots, couple of good shots and a couple of good passes from my linemates. Petey was finding me all weekend and even Brooksy and Kivi at the end there. It was just a good weekend overall.

On the team’s goaltending:
Yeah, they really stepped up this weekend. We trust them back there and we have full faith that they’re going to shut the door when we need them to. It was a full team effort I feel and it was just good to see.

On how the team played in this weekend’s three-in-three:
I think all three games were a step in the right direction. Last month kind of got away from us and I think all three games we played, I wouldn’t say the full sixty every game but we certainly made strides and found our confidence and I don’t think there are too many teams that can play with us when we play such a full game and team game out there.

The Marlies close out their three in three weekend today, playing host to the Laval Rocket to wrap up a trio of divisional matchups.

Toronto picked up a much needed win on home ice yesterday, blanking the visiting Rochester Americans 4-0 to move back within two points of a playoff spot.Mason Marchment continues to be hot with five goals through his last two games. He is the first Marlie to score five consecutive goals. Marchment has 14 points (10 goals, 4 assists) through 21 games. Joseph Woll earned his second career shutout in a 38-save effort, restoring some confidence in himself and the team as a whole. “I think it was big for me but I think it was really huge for the team,” said Woll following yesterday’s game. “I think we’ve been on a little bit of a downward spiral lately so I think a big win like that against a good team is something we can really build on.”  The Marlies will be looking to carry that momentum over to today as they face another one of the teams they’re chasing in the North Division standings.

The Rocket currently sit in fourth place in the North Division and they’ll be looking to bounce back from a tough overtime loss in Belleville last night. This marks the fifth meeting between these division rivals this season, and they are neck and neck in their regular season series, each picking up a regulation win and extra time win to knot the series.

Puck drops at 4:00 PM on Leafs Nation Network and TSN 2. The game will also be streamed live in the Maple Leafs app.