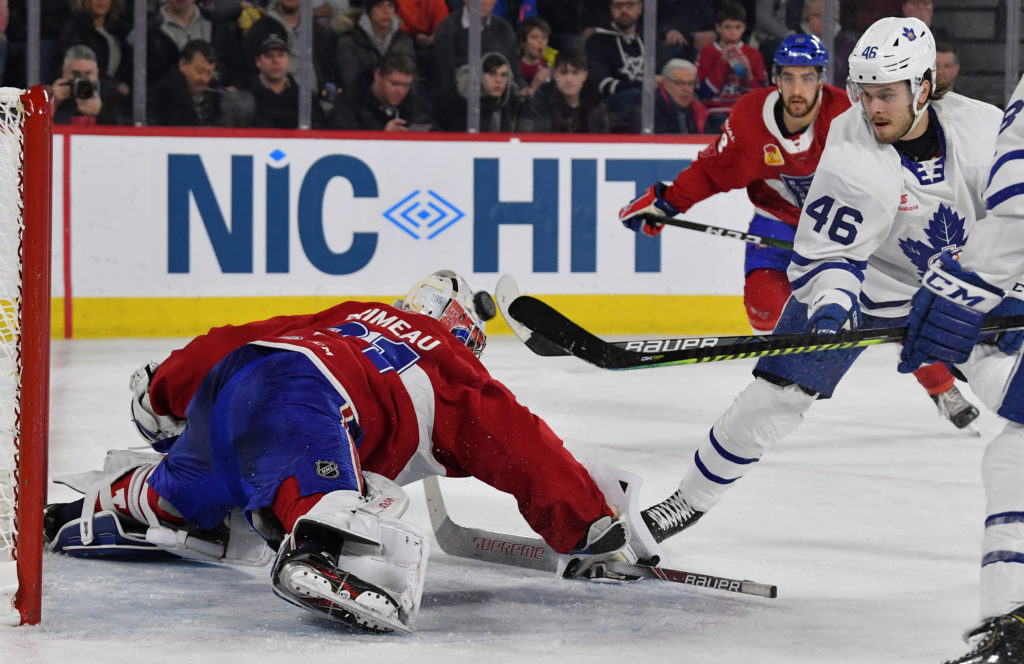 The Marlies suffered their third straight loss on Saturday, falling 2-1 in a close battle with the Laval Rocket.

The opening frame saw back and forth action and a number of solid chances at both ends of the ice. Michael Hutchinson made some key saves for Toronto to keep Laval off the board. Neither team could find the back of the net in the opening 20 minutes.

Alexandre Alain opened the scoring at 1:56 of the second period to give the home team a 1-0 lead. The Marlies were quick to respond as Matt Read evened things up at one apiece less than a minute later. Egor Korshkov carried the puck into the offensive zone, putting in some work to keep possession in the corner before Hudson Elynuik picked up the loose puck and sent a saucer pass to Matt Read who was in alone following up the play. Read has nine points (7 goals, 2 assists) through his last seven games. The game remained knotted 1-1 after 40 minutes of play.

Laval’s Yannick Veilleux broke the deadlock at 5:03, capitalizing on a power play to restore the Rocket’s lead. That would be the lone goal of the frame as the Rocket held onto their one-goal lead and picked up the two points.

The Marlies will be back in action on Wednesday against the Cleveland Monsters for another early start at Coca-Cola Coliseum.

On how Toronto handled a strong defence from Laval:
Not as well as we would have liked. They definitely clogged things up. They play a patient game, they’re waiting for turnovers in transition and we kind of fed it to them. I thought in the first period between our offensive blue line and the top of the circle, we had a couple turnovers, we were kind of forcing plays. We’ve preached possession down low for our team and where we’ve had success of getting pucks off the wall and cutting off hands and dominating the play with goal line pass outs and using the whole zone, we just never even got to that part of the game. There were moments of the game where we were just losing our 50/50 puck battles and they just had a little bit more strength and power within their game and I was hoping the team would find a little bit more of a playoff mentality. Points are everything right now. We were one point ahead of this team going into the game and I was hoping for a little bit more desperation.

On what combinations he liked from his lineup:
Gaudet and Read have been playing really well together as of late with Wilson. Getting Korshkov back, I was hoping he could piggyback off of their energy and time spent in the offensive zone. It didn’t quite work out that way. Tried to flip him and Wilson again to try and get stuff going back for that line having success. I liked Woods, I liked Pooley. Clune gave us good energy. There are definitely some elements of our depth in our lineup that brought some good parts of their game but there are some guys we need to lean on in the top six that just didn’t find it today.

On the message going into Wednesday’s game:
It’s playoff mentality. We’ve got to fight and scratch for every point. There’s just not a shift or a period that we can give up right now. It’s too tight a conference, a division. We’ve got to find that type of energy and commitment and discipline and 60 minutes of hockey. We’ve found pockets of time where we’re playing and doing good things, it’s just not enough at this point and the group’s got to recognize the desperation for 60 minutes is needed.

The Marlies are back on the road today for a Saturday showdown with the Laval Rocket.

Toronto looks to turn things around today and get back in the win column after back-to-back losses to Binghamton. Toronto (57 points) has fallen to sixth place in the North Division, currently sitting one point behind the Binghamton Devils (58 points) and Syracuse Crunch (58 points). It continues to be a tight playoff race with Laval (56 points) sitting in seventh, only one point back from Toronto. With an important two points on the line, the Marlies will be looking for a full 60 minutes in today’s divisional battle.

This marks the sixth of eight meetings between these North Division rivals, and the Marlies hold a slight edge in the regular season series having won three of the previous five contests. The Rocket are coming off a 4-1 win over the Manitoba Moose, but have struggled recently with only two wins in their previous 10 games.

As they continue to look for consistency, the Marlies have leaned heavily on organizational depth with players coming up from the Newfoundland Growlers. “They played really well, they made plays,” said head coach Greg Moore following last game. “They were part of the reason that we started coming back there towards the end and feeling like more of a confident team. So good signs for the development of the organization.” The Marlies also have a new addition to the lineup today, Max Veronneau, who was recently acquired by the Maple Leafs from Ottawa in exchange for Aaron Luchuk and a 2021 conditional sixth-round pick. Veronneau, 24, has appeared in four games for the Ottawa Senators this season. He has also skated in 33 games with the Belleville Senators in 2019-20, recording 10 points (5-5-10).

Puck drops at 3:00 PM on AHLTV. Fans can also follow along on Twitter (@TorontoMarlies) for live game updates.