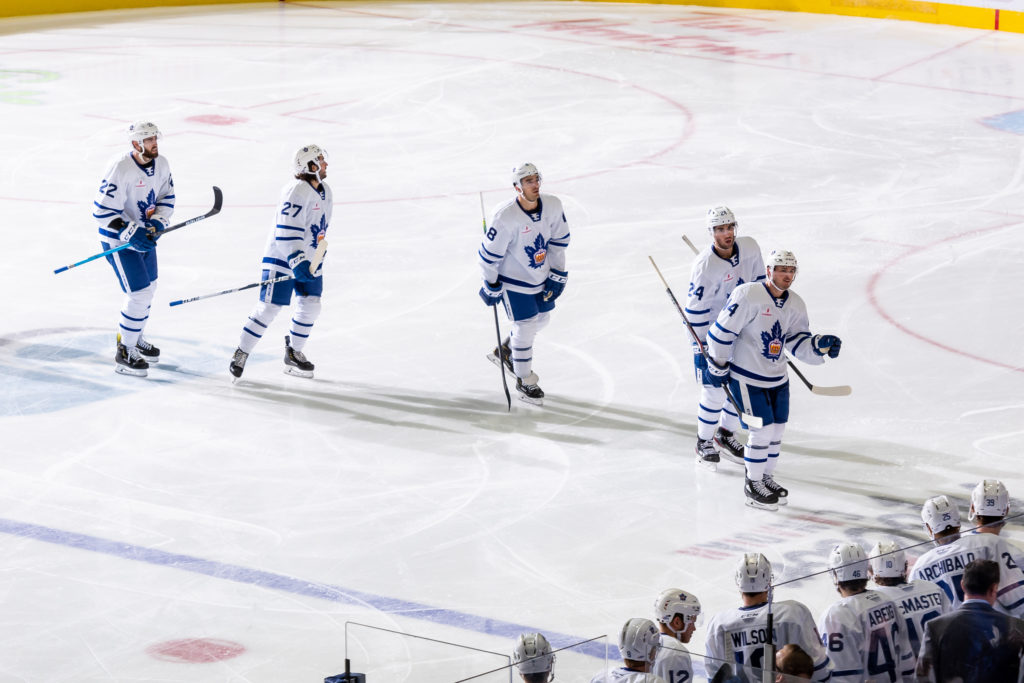 The Marlies extended their win streak to four following a 4-3 win over the Hershey Bears Wednesday night.

Kenny Agostino got things started early in the first period, finishing off a beauty cross-ice pass from Jeremy Bracco. Adam Brooks recorded the secondary assist on the opening goal. Around the halfway mark of the frame, the Marlies capitalized on a power play as Egor Korshkov lit the lamp for the fourth time in as many games. Bracco and Rasmus Sandin picked up the assists on the power play goal. Late in the frame, Hershey’s Liam O’Brien cut the Marlies’ lead in half to make it 2-1 heading into the first intermission.

The Marlies shook off that late first period goal and came out ready in the second period. Adam Brooks restored the two-goal lead just 1:20 into the frame after receiving a pass from Jordan Schmaltz and splitting the defence to walk in alone on Vitek Vanecek. Agostino picked up the extra assist, and that was it for Vanecek as Pheonix Copley entered the game for the Bears. Near the halfway mark of the game the Bears were back within one as Axel Jonsson-Fjallby beat Kasimir Kaskisuo to make it 3-2. The Marlies power play converted for a second time late in the period as Tanner MacMaster slid the puck under Copley’s pads to give Toronto a two-goal cushion heading into the final frame.

Jonsson-Fjallby scored his second of the night at 4:52 of the third period to bring the Bears back within one, but the Marlies stood strong the rest of the game to preserve the lead and earn their fourth straight victory.

The Marlies are back in action for a doubleheader weekend at Coca-Cola Coliseum, taking on the Cleveland Monsters Saturday and Sunday.

On playing against Hershey Bears:

They’re a good group. They have a lot of speed and very deep defence. All three pairings that they have are very mobile and very good both with the puck and without it. Their defence makes it hard. Overall, their team speed. I thought lines one through four were very good, and in particular the top two centres they have. They’re as quick and as skilled as centres as you’ll face in the American League, so that presents some problems. We knew that going in, but nothing that we shouldn’t have been able to handle better than we did.

On Rasmus Sandin returning to the Marlies:

He was good. He was just in control when he was out there. He and Liljegren both, I thought Liljegren had his best game today as well. That was a real nice pairing for us and it felt good when they were out there.

On what he’s seen from the team through four games:
We’re a skilled team. We have some players that are opportunistic for sure. I haven’t liked either game that we’ve played here on home ice. We talked to the team and we’re 4-0 here now but in my mind, we really have one win that’s felt like a real true win. I think this group is capable of a whole lot more. We’ve got a day off tomorrow to regroup and have a good practice on Friday and get ready for another opportunity to play on home ice this weekend.

After picking up back-to-back wins in Winnipeg last weekend, the Marlies return home tonight to kick off a three-game homestand at Coca-Cola Coliseum.

The Marlies are off to a hot start this season and sit atop the North Division standings with a perfect 3-0 record. Toronto has been dominant on the penalty kill so far this season, shutting down nine power play opportunities and adding a shorthanded goal for.

The Hershey Bears sit just above .500 with a 2-1-1 record on the season. They come into tonight’s game riding a two-game win streak, including a 5-1 win over Wilkes-Barre/Scranton on Sunday.

Players to Watch: Travis Boyd (4-2-6) and Mike Sgarbossa (3-3-6) lead the Bears with six points apiece. Since clearing waivers earlier this month, Boyd quickly jumped to the top of the AHL leader board after posting six points in his first two games.