Marlies Close Out Royal Road Trip With a Win 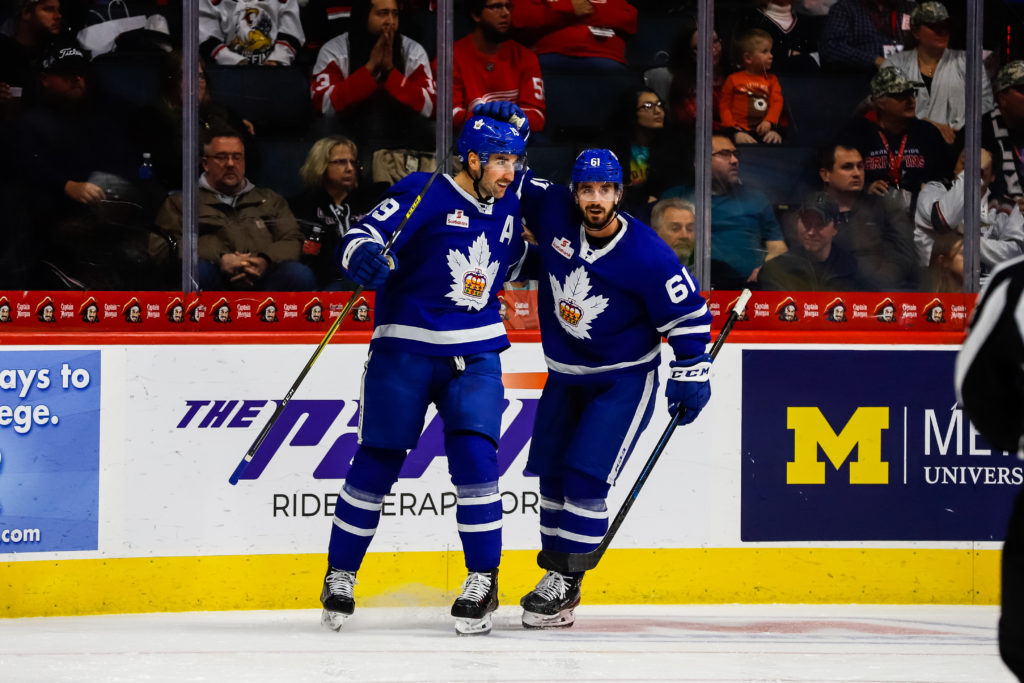 The Marlies are heading home on a high note after closing out their seven-game road trip with a 5-2 win over the Grand Rapids Griffins Saturday night.

The game saw back and forth action as each team exchanged their fair share of penalties, but it would be the Marlies who struck first on the power play. Pontus Aberg opened the scoring at 16:34 of the first period with his 8th of the season. Tanner MacMaster and Pierre Engvall assisted on the power play goal and the Marlies held a 1-0 lead after 20 minutes of play.

Garrett Wilson extended the lead early in the second period, scoring from an awkward angle after banking the puck in off the back of Griffins’ goaltender Filip Larsson. Kenny Agostino and Nic Petan assisted on Wilson’s 4th of the season. At 7:28 of the second period, the Griffins scored on a power play to cut the Marlies’ lead to 2-1. Just over a minute later the home team struck again to even the score 2-2. The Marlies restored their lead late in the frame when Pierre Engvall redirected a point shot from Rasmus Sandin. The Marlies lead 3-2 after 40 minutes of play.

The Marlies held their lead  through the majority of the third period until they were granted an opportunity on the power play late in the frame. Seconds into the man-advantage, Kenny Agostino finished off a sweet passing play from Rasmus Sandin and Nic Petan to extend the Marlies’ lead to 4-2. Pierre Engvall added an empty net goal at 17:08 to seal a 5-2 win.

The Marlies will have a week of practice before kicking off a five-game homestand next Saturday at Coca-Cola Coliseum.

On tonight’s game:
I really liked the effort, for sure. The system and process and just the intelligence that we’ve played with could improve and that will be the challenge for us this week and we’ve got a long period of time to sort some things out but I really liked the effort today. It was such a crazy game, so many special teams then the penalty kill, we were asking so much of them against such a potent power play that had burned us the night before. We just thought that our guys had really dug in and competed hard. Just watching guys come back to the bench, they’re exhausted. It’s the end of a long week here on the road so certainly happy with the effort and because of that effort, I thought we earned the two points.

On the team’s power play (2 goals):
Special teams, such a factor in the game yesterday and we suspected they’d be again today so to get both units on the board and at big times for us as well to open the scoring of course and then to extend the lead in the third. That’s what you want to score goals at important times. It can and will continue to improve. Again, a long week of practice for us. There’s a long list of things that we need to get better at and that will be one of them.

On Timothy Liljegren’s injury:
At this stage, it’s not looking quite as serious as it looked in terms of not being able to put any weight on it. He seems like he’s able to put some weight on it now but he was obviously in no shape to come back into the game. We’ll get back to Toronto and get it looked at. Unfortunate hit, hate to see those kinds of hits. There was some knee-on-knee contact and there was some contact with his head as well. It was kind of a double whammy in terms of the kinds of things you don’t ever want to see. Unfortunate of course, that it doesn’t get called. The league will take a look at it and do what they need to do but we’re more concerned about Lily of course and make sure that we can get him healthy as soon as possible.

The Marlies close out their seven-game Royal Road Trip today in Grand Rapids, looking to snap a three-game losing skid and head home on a positive note.

Special teams situations will be a key focus for the Marlies today after conceding three goals last night to the Griffins’ league-best power play (29.3%). The Marlies were also 0/6 on the power play last night and will be looking to a better job in that department tonight as they welcome Rasmus Sandin and Nic Petan back to the lineup. “Obviously, Petan and Sandin are coming in tomorrow so those are two first shooter power play guys, that’s a number one centre and a number one defenceman that changes our team significantly so that will help of course but as coaches we’ve got to do a better job to prepare our team and more importantly, we’ve got to stay out of the penalty box,” said Sheldon Keefe following last night’s game.

Egor Korshkov opened the scoring in yesterday’s contest, his ninth point (7 goals, 2 assists) through 11 games. He has scored the game’s first goal four times this season and now sits even with Pontus Aberg for the team lead in goals.

Grand Rapids’ Chris Terry picked up two assists last night, bringing his point streak (6-9-15) to eight straight games as he continues to lead the league in that department.

Puck drops at 7:00 PM on AHLTV. Fans can also follow along on Twitter (@TorontoMarlies) for live game updates.