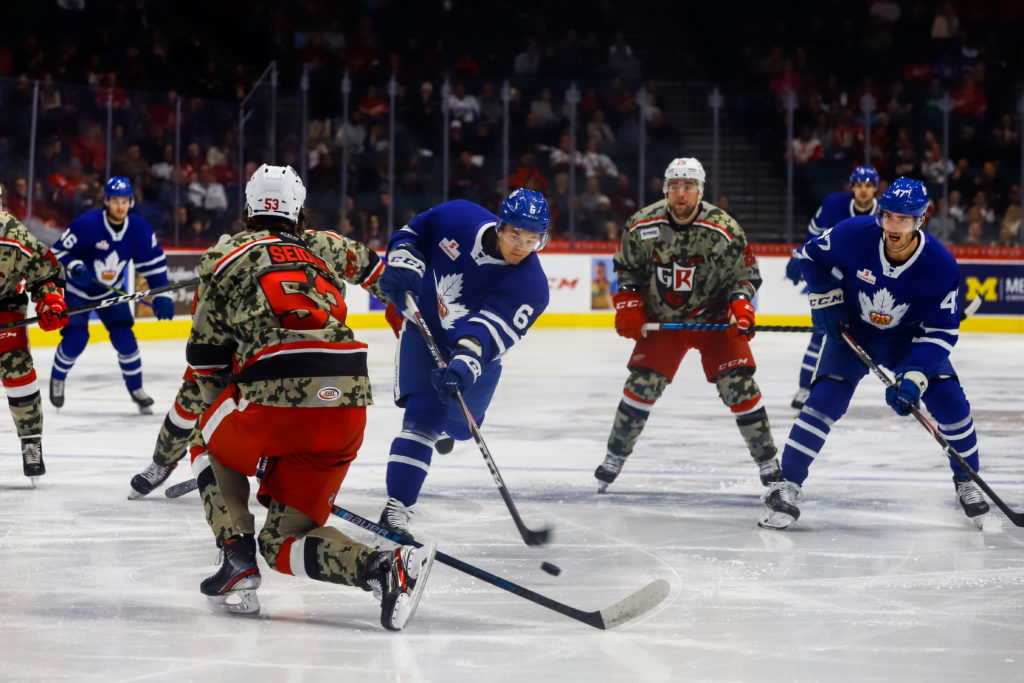 It was a tough night for the Marlies, who dropped their third straight contest in a 4-1 decision in Grand Rapids.

Egor Korshkov opened the scoring early in the first period, picking up a loose puck and walking in alone on Calvin Pickard. Korshkov’s 7th of the season was unassisted. The Marlies held a 1-0 lead after 20 minutes of play.

Filip Zadina got the home team on the board, capitalizing on a power play to even the score 1-1 at 5:32 of the second period. The score remained locked at 1-1 after 40 minutes of play.

The Griffins added back-to-back power play goals in the third period to jump ahead 3-1. The Marlies couldn’t get anything going and pulled Joseph Woll late in the frame hoping to cut the deficit with an extra attacker. Unfortunately the Griffins scored on the empty net to seal a 4-1 win.

The Marlies will have an opportunity to rebound tomorrow when they close out their annual Royal Road Trip and second half of their back-to-back against the Griffins.

On special teams:
Both never were in a good place. Statistically, they were in a good place but we were getting all sorts of luck which is what we were getting as a team for all of our results and in the standings. The reality is we’ve been outplayed the majority of every game we’ve played this season and it’s catching up to us now. Special teams are no different. The biggest issue of course is taking too many penalties. We’re playing against an elite power play today so giving them as many opportunities as we did especially with the game so close in the third period is unacceptable and, of course, our power play is pretty anemic. So, we need to get that fixed quickly. Obviously, Petan and Sandin are coming in tomorrow so those are two first shooter power play guys, that’s a number one centre and a number one defenceman that changes our team significantly so that will help of course but as coaches we’ve got to do a better job to prepare our team and more importantly, we’ve got to stay out of the penalty box … We’ve got to be competitive, we’ve got to give ourselves a chance to win, all areas of our game have to improve. We’ve got a chance to win here and get back at it tomorrow then a long week of practice to make some progress. Clearly, things have not been going well for quite some time. It’s 12 games into the season and it’s starting to catch up with us and the luck that we had in the early going.

The Toronto Marlies are set to close out a seven-game road trip this weekend with back-to-back games in Grand Rapids, Michigan.

After taking their first regulation loss of the season on Wednesday, the Marlies will be looking to get back in the win column tonight when they face off against the Griffins for the first time since the 2015-16 season. The Marlies swept that four-game regular season series.

Toronto (7-1-2-1) has captured 17 of a possible 22 points so far this season and currently sits second in the league, while the Griffins (5-5-1-1) will be looking to snap a four-game losing streak.

Puck drops at 7:00 PM on AHLTV. Fans can also check in on Twitter (@TorontoMarlies) for live game updates.