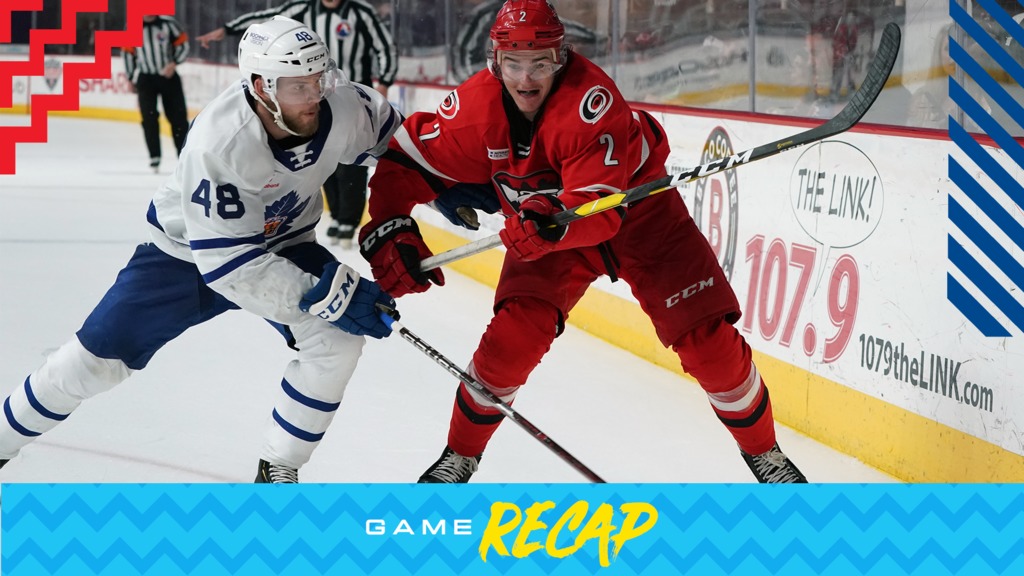 The Marlies got things started early in game two of the Eastern Conference Finals, taking a 2-0 lead in the opening period, but a late surge propelled the Checkers to a 5-3 win to even up the seies 1-1.

Jeremy Bracco potted the opening goal just 1:33 into the first period, finishing off a saucer pass from Rasmus Sandin. Jesper Lindgren recorded the secondary assist, picking up a point in his first postseason appearance with the Marlies. Eight minutes into the frame, Dmytro Timashov was slapped with a double minor for a spearing attempt, sending the Marlies to the penalty kill for four minutes. The penalty kill did their job to kill off the infraction and keep the Checkers at bay. At 15:43, Colin Greening beat Alex Nedeljkovic with a backhand to put the Marlies up 2-0. Josh Jooris and Andreas Borgman assisted on the goal. Shots on goal in the opening 20 were 8-6 in favour of the Marlies.

The Checkers battled back in the third with four unanswered goals including an empty-netter to jump out in front and even the series 1-1.

Here are three takeaways from the Toronto Marlies’ 5-3 loss to the Charlotte Checkers Saturday in Game 2 of the American Hockey League’s Eastern Conference Final:

On when the team began to sit back in the game:
I don’t know if I would necessarily say sitting back. I thought we were just careless and that started in the first period. Through the first and the second period, we gave up way too much defensively. We had to rely on our goaltender way too much just by being careless and soft with the puck. We had a lead for ourselves and it made us feel comfortable and that’s the worst, absolute worst thing that could have happened for us in a game like today which we just weren’t sharp, we were careless and soft with the puck as I said. We get what we deserve in the end.

On leaning on veterans to get momentum back in the game:
I actually thought the third period especially defensively strangely enough was our best period of the game. When you look at it, we had good scoring chances. We gave up half as much as we did in the first and second so you look at the goals and it’s the luck turning on us. The luck has gone in our favour all through the playoffs and that’s why we’ve had an unblemished record but our best defenceman falls and coughs up the puck and then two pucks they shoot in the net off of our own guys so luck turns but luck turns because you give them the chance to happen. We get what we deserve and frankly, I’m happy, I’m excited about it. This is what playoffs are supposed to be like. We need to experience this. It’s important. This is the best part about the playoffs is you’ve got to ride the emotions, you’ve got ride the ups and downs and we haven’t had to experience that yet. What you’re seeing in today’s game is a byproduct of that. The emotions of the playoffs are the best part so now we finally get to experience it.

On leaning on the adversity felt this season by the team:
Absolutely. Like I said, this is what playoffs are about. It’s supposed to be difficult especially when you’re playing the top team in the league. It’s supposed to be difficult so things were going way too easy and it turned. The way we were playing allowed that to happen. So, we have to play a lot better. All that said, we were up 3-0, we missed three breakaways in the hockey game, we’ve had the chance to really break the game open and all the other stuff probably doesn’t matter but like I said, I think the luck turned on us here today. We missed our chances, pucks bouncing all over the place and ends up in our net and the series is tied and we get to go play at home.

On tonight’s game:
I thought we jumped out to a nice lead and maybe we felt a little too good about ourselves and we stopped playing the way that we wanted to play. That’s a very skilled hockey team that you can’t give them much life or much room and I think once we scored that third goal, maybe we felt too good about ourselves and started to lay back and give them space and play careless with the puck and they capitalized. I think three or maybe four of their goals were very lucky goals for them but at the same time, I think they could have had other goals that they generated because of what we gave them. We could look at it like a couple of bad bounces but we gave them too much space and we laid off the gas. I thought we came out well but you can’t give a team like that any life, any room and they took advantage of it and that’s why they’re here. It’s been a long time since we’ve experience a loss so we have to rebound. We were happy with the split. Obviously, wanted two and are disappointed in the outcome here. We’re a good team that needs to rebound and we’ll be ready for Game 3.

On the difficulty of turning momentum mid-game:
It’s tough to get momentum on the road, especially against a good team like that. We’re a good team, we’re a mature team that we should be able to hone it in and we didn’t do a good job and that’s on us. Credit to them, they capitalized on their chances, they kept coming but we’ve got to clean some areas up. In Game 1, we played a sound, structured defensive game and in Game 2, we didn’t and this is the outcome.

The Toronto Marlies extended their 2019 postseason win streak to eight straight on Friday night, posting a 2-1 victory over the Charlotte Checkers in game one of the Eastern Conference Finals.

Here are three takeaways from the Toronto Marlies’ 2-1 victory over the Charlotte Checkers Friday in Game 1 of the American Hockey League’s Eastern Conference Final:

Kaskisuo, Marlies’ defence keeps Checkers’ offence at bay: The Checkers were second overall in the AHL in goals-for in the 2018-19 regular season with 255 goals generated, but Friday in Charlotte, Marlies goalie Kasimir Kaskisuo turned aside all but 1 of the Checkers’ 26 shots on net to keep Toronto unbeaten in the post-season thus far. The lone goal Kaskisuo allowed was to defenceman Haydn Fleury at the 12:07 mark of the second period – a goal that evened the score after the Marlies took a 1-0 lead at 5:50 of the second frame on a power play goal from left winger Dmytro Timashov – but Kaskisuo was solid the remainder of regulation time and boosted his 2019 post-season record to a dazzling 8-0-0, with one shutout and a .950 save percentage.

Marlies head coach Sheldon Keefe can’t ask for much more than that from his 25-year-old starting netminder, and the defensive effort Toronto’s players put in around Kaskisuo ensured the Marlies would have an opportunity to secure a massive road win and take away home ice advantage from the Checkers.

Marchment continues hot streak, scores game-winner: Left winger Mason Marchment scored twice in Toronto’s series-winning Game 4 against Cleveland in the second round of the playoffs, and the 23-year-old remained on an offensive hot streak by netting the game-winner Friday, just 57 seconds into the third period.

Marchment – who utilizes his 6-foot-4 frame to play a robust physical game – now has three goals and five points in eight playoff games this year. He’s proving his contributions in last season’s Calder Cup-winning run with the Marlies, which included six goals and nine points in 20 games, were no fluke.

Marlies’ special teams on point: The Marlies were a smart, disciplined group in Game 1, giving the Checkers only one power play and preventing them from scoring. Meanwhile, Timashov’s goal made Toronto 1-for-2 with the man advantage Friday, and proved to be a crucial component in the victory. At a point in the year when the stakes rise with every passing minute – and in a game where the Marlies carried a one-goal lead through the final 19:03 of the third – Toronto’s players weren’t rattled by the pressure and came together to defeat Charlotte, who had lost just once through their first two playoff series this spring.

The Checkers and Marlies won’t have any time to reflect on Game 1, as Game 2 will take place in Charlotte today at 6 p.m. But if the Marlies are once again able to stay out of the penalty box and play an opportunistic offensive game, they have the chance to be in the driver’s seat with a 2-0 series lead as the teams head back to Toronto for Games 3, 4 and 5 (if necessary) this coming Tuesday, Thursday and Saturday at Coca-Cola Coliseum. And if Marlies fans see their team continue its unbeaten playoff streak by winning both games in Charlotte, the roars of support in Toronto’s home rink Tuesday and Thursday are likely to provide a terrific boost as they push deeper into the post-season.

Puck drops at 6:00PM on Leafs Nation Network and AHLTV. Fans anywhere across Canada can also stream the game live in the official Maple Leafs app. Follow us on Twittter and Instagram for behind-the-scenes action from Bojangles’ Coliseum. 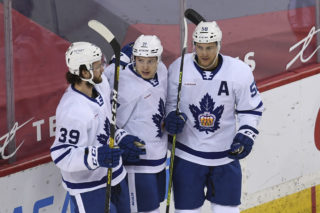 Marlies Pick Up Second Straight Win Against Stockton
15 hours ago 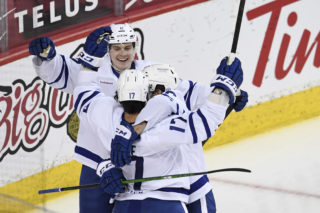 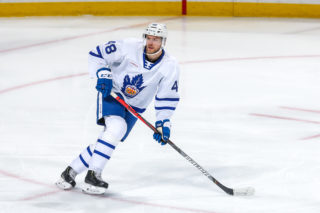 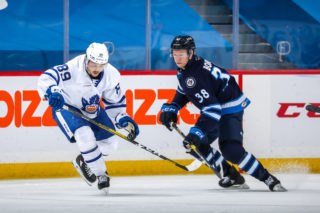 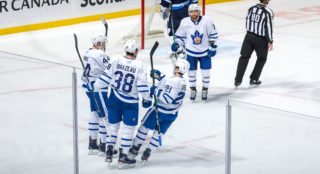 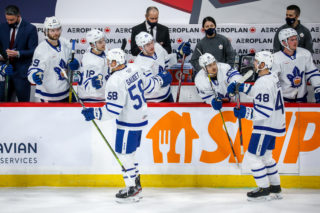