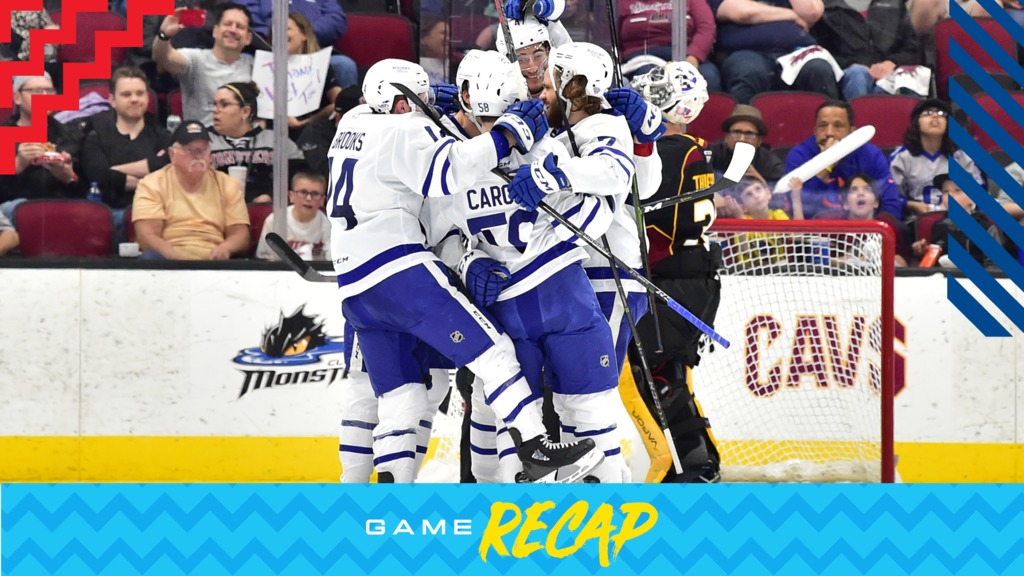 The Marlies didn’t get the start they wanted in game four of the North Division Finals, finding themselves down by two after 20 minutes of play. But as they’ve done all season, the Marlies showed no quit and battled back with a big second period to set themselves up for a win.

Cleveland’s Trey Fix-Wolansky opened the scoring at 2:54 of the first period. Minutes later, Zac Dalpe buried a power play goal to give the Monsters a two-goal cushion. The Marlies outshot the Monsters 9-6 in the opening frame but couldn’t find the back of the net.

The flood gates opened in the second period as Mason Marchment and Trevor Moore each potted a pair of goals in the first 10 minutes to put the Marlies in front 4-2. Marchment got things started by burying a rebound for his first of the postseason. Adam Brooks jumped out on a partial breakaway and was stopped by Brad Thiessen, but Marchment was following up the play and found the loose puck to get the Marlies on the board. Vincent LoVerde picked up the extra assist on the goal. Minutes later, Marchment added his second of the night, tipping in a point shot from Timothy Liljegren on the power play. At 7:12 of the second, Moore scored a beauty from the side of the net, roofing the puck up and over the shoulder of Thiessen to give the Marlies their first lead of the night. LoVerde and Liljegren assisted on the goal. At 9:56, Moore added his second of the night, firing the puck in off the back of Thiessen. Chris Mueller and Jeremy Bracco assisted on the goal. The Marlies outshot the Monsters 15-9 in the second period and held a 4-2 lead heading into the final frame.

Michael Carcone added two goals in the third, including an empty-netter to seal a 6-2 win. The first came early in the frame when Jeremy Bracco carried the puck in deep and around the back of the goal before feeding Carcone out in front who redirected it past Thiessen. LoVerde assisted on the goal, picking up his third point of the night. Carcone’s empty-net goal came at 19:23 of the final frame.

The Marlies now await the winner of the Charlotte-Hershey series.

On the team’s resilience showing through in Game 4:
Not unlike Game 2 in the Rochester series, we’re down obviously that was in the third period but I liked our first period, frankly. We made one mistake that ended up in our net at even strength there and then we were on the wrong side of a couple calls in the first period and they score one on the power play but in terms of how we controlled the play, the time we spent in their end, it was one of better periods of the season in that sense. We were just encouraging the group to stay with it and not get discouraged. We felt if we could score the next goal, we could make things interesting and that’s exactly what happened. Once we get going, we’re hard to stop.

On what happened in the second period:
I don’t know. Other than to say, we just got playing and we went out and were focused and we just got some good shifts by every line so it was two, three, four shifts in a row that you carry play. You get the other team on their heels and they can’t get off the ice in the second period there. We just took advantage of those opportunities. It was pretty fun to watch that as I told them after the second period, you’re standing on the bench and players are going out … and they’re working and they’re taking the game back. It was fun to watch that and be a part of that. Those are the types of efforts you really only get in the playoffs that you remember. You remember coming back from that 2-0 deficit in Rochester, it was such a major swing in the series. Today, they got a lot of confidence early and you have to go and get that back so it was really good to see.

On not panicking being down after the first period:
As a coaching staff, our message after the first period was we had a good period, there’s no reason to change anything or worry, we’ve just got to go out and keep playing. We felt confident that if we could just continue with the type of time spent in their end like we did in the first that it would break them down, wear them down and we would get our chance to score the next goal. We just wanted to score the next goal. If they get up three, it’s tough sledding but get the next goal is big, then we get the power play. It was strange. We score our first goal very similar to the way they score theirs and then we get a power play with a tip just like they did  and then all of sudden it’s a new hockey game and our guys got going after that. It was fun to watch. Those are the great moments you remember through the playoffs.

On defying expectations:
There’s some of that at play for sure but at the same time, you look at our defence and they might be the least experienced defence that you’ve ever seen at this time of the playoffs. I think it’s a combination of experience and hunger and just group cohesion. The group wants to compete, wants to get better. We’re backed by strong goaltending that gives us a lot of confidence. There’s a lot of things that have fallen into place for us to be the first team that is waiting for the conference finals.

On what the feeling on the bench was after going down 2-0:
They’re a good team. We knew they were going to come with a push at the beginning there. We didn’t go a really great job of keeping the pucks out of our net but we were confident in how we were playing and thought if we kept playing that way that things would turn around and fortunately they did.

On whether Toronto had a good start:
I thought it was a decent enough first period for us. It’s in their building. It’s an elimination game. You’ve got to expect they’re going to come hard. I think the start was good for us. It didn’t go our way but that’s the team we have, we’re a resilient bunch and we were able to get it done.

On his linemates Adam Brooks and Trevor Moore:
Honestly I wouldn’t want to play with anyone else. Two great linemates, they both work really hard and love to get pucks back and I love playing with them.

On how the game developed:
We know they’re a good team. We knew they were going to come with a push. I’m happy for our group and sticking in there and pushing back in the second period.

Schedule for Eastern Conference Finals to be confirmed.

The Toronto Marlies have a chance to close out the North Division Finals tonight in game four of the best-of-seven series against the Cleveland Monsters. After winning the first two games at home, the Marlies extended their post-game win streak to six on Sunday, blanking the Monsters 2-0 to take a commanding 3-0 lead in the series.

The Marlies’ league-best power play (35%) has been lethal in the postseason and continues to be a key area of success for Toronto. They’ve converted on seven of 20 power play opportunities, and have been perfect on the penalty kill when playing away from Coca-Cola Coliseum.

The Monsters welcome some reinforcements to their lineup tonight, following the elimination of the Columbus Blue Jackets from the Stanley Cup Playoffs. Alexandre Texier makes his return to the AHL and will look to make an immediate impact as the Monsters look to claw their way back into the series in tonight’s must-win game.

Players to watch: Kasimir Kaskisuo picked up his sixth straight win on Sunday and has been lights out for the Marlies this postseason.Kaskisuo stopped all 35 shots he faced and is now 6-0-0-0 in the playoffs with a .953 Save Percentage and a 1.49 Goals Against Average. Dmytro Timashov scored the empty net goal on Sunday and has recorded a point (2-5-7) in each of Toronto’s playoff games. Jeremy Bracco leads the Marlies in postseason scoring with 10 points (2 goals, 8 assists).

Puck drops at 7:00PM on Leafs Nation Network and AHLTV. Fans across Canada can also stream the game live in the Toronto Maple Leafs app. Follow us on Twitter and Instagram for behind-the-scenes action from the Rocket Mortgage Fieldhouse.