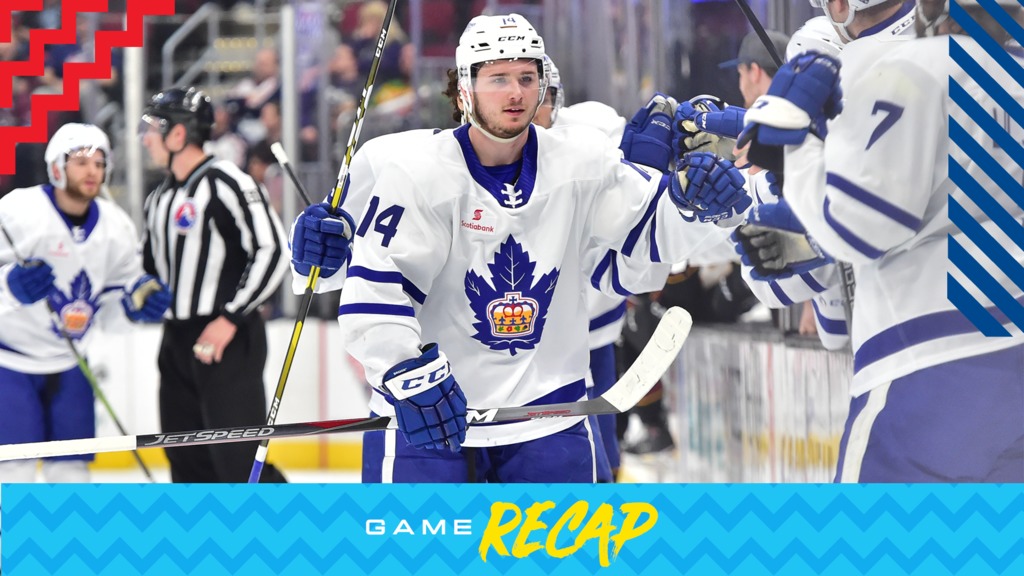 The Marlies picked up their sixth straight win on Sunday, shutting out the Cleveland Monsters to take a 3-0 lead in the best-of-seven series. Adam Brooks opened the scoring at 13:24 of the first period, burying a beautiful feed from Trevor Moore. Mason Marchment picked up the secondary assist on Brooks’ fifth of the postseason. Kasimir Kaskisuo turned away all 14 shots he faced in the opening 20 minutes to preserve the Marlies’ one-goal lead.

Early in the second period, Carcone had a close chance to put the Marlies ahead by two but couldn’t get his stick on a loose puck in the Monsters’ crease. At 14:51, Rasmus Sandin and Dan DeSalvo picked up coincidental roughing penalties resulting in some four-on-four action for two minutes. Neither team could capitalize with the open ice and the game returned to five-on-five. At 17:34, the Marlies saw their first power play opportunity of the game as Cleveland’s Doyle Somerby was called for cross-checking. The Marlies were unsuccessful on the ensuing man-advantage and the game returned to even strength. The Marlies held the Monsters to only six shots on goal in the second period and held on to their one-goal lead at the end of 40 minutes.

Late in the third frame, the Monsters pulled Thiessen in favour of an extra attacker as they pressed to even things up. With 30 seconds remaining, Pierre Engvall corralled the puck on the boards and sent Dmytro Timashov off to the races. He was alone with the empty net and sealed the deal with an empty net insurance goal.

Kasimir Kaskisuo earned his first postseason shutout and sixth straight win, turning away 35 shots. He has stopped 84 of 89 Cleveland shots in the series and 181 of 190 shots overall this postseason.

On the strong defensive effort in a road game:
Particularly in the second and third period. In the first period, we still gave up a little bit too much and we didn’t like. It was actually a pretty good period for us but then we just had some lulls at different times and the game opened up and they took advantage of it. Then through the second and third, we didn’t give up very much at all and when we did, it didn’t matter because Kaskisuo was great today.

On Toronto being hemmed in late in the third period.
We knew (Cleveland) was going to have a real strong push and that was it. We just couldn’t get the puck over the line, couldn’t get on their half, get a line change but that’s playoff hockey. You could see the guys digging in and they have to find some reserve tank there, real gutsy effort blocking shots and all of the different things it takes to win. We’ve come to expect our power play will make a real difference for us. Today, it’s not a factor so we have to grind it out. It’s just another example of our team finding ways to win.

On Kasimir Kaskisuo:
He’s so confident right now. Any puck that’s coming in from the perimeter, he’s tracking it well, he’s giving no rebounds. We just on our team, protect the middle of the rink and not give up anything too egregious and he’s going to be there. We have faith in that and his confidence is growing by the day and our confidence in him has been there for quite awhile now and he’s a big reason why we’re still playing.

On the next game as an elimination game:
Just today’s game alone was a very difficult game in a lot of ways. What we talk about is you never really control a series until you win in their building. We did that here today and now we’re in control and we want to take care of that and not give them any life or momentum. That’s a good hockey team. Particularly that last two games could have gone either way. We’ll use the time that we have now to rest and recover. It was a pretty quick turnaround from our game on Friday night so we want to recharge a little bit here and be better next time.

On how Adam Brooks has developed in his two seasons with Toronto:
Tremendously. He’s just a confident guy who we can put in any situation, power play, penalty kill. When Trevor Moore was up with the Leafs, he was filling in on our top unit of the power play and we didn’t miss a beat. But then just continuing on the penalty kill, he’s been up over 20 minutes a night at centre ice position, leading the way for us there. It’s been nice to see that for sure. He’s been a real constant for us for most of the season. He had a tough start to the season, overcoming an injury early and then since then, he’s been real good.

On a good road win:
A few times early on, we were on the wrong side of the puck, weren’t really playing the way that we wanted to so Keefer challenged us to tighten things up and take on their defensive games and I thought through the second and especially in the third, we did that. That’s the type of game that you’re going to have to play down the stretch and as playoffs go on and on, it gets harder with the competition and teams are going to capitalize on those opportunities. If we give these guys enough chances, they’re going to do that too. They’ve got a lot of highly skilled players. We had to buckled down and I thought we did a good job of that.

On heading into the third period with a one-goal lead:
We were confident. Kas has been playing great for us all playoffs. We knew he was going to shut the door. When the coach challenges you to do something, usually if you’re a strong enough team you answer to that. We knew that we were capable of playing better defensively and like I said, I think we did that.

The North Division Finals head to Cleveland for games three and four, with the Marlies holding a 2-0 lead in the best-of-seven series.

With a win at home on Friday, the Marlies have posted five consecutive postseason wins and are the only team without a loss in the Calder Cup Playoffs. Their league-best power play (38.9%) has converted on seven of 18 opportunities, and their penalty kill (86.7%) has allowed only two goals against. Kasimir Kaskisuo is now 5-0-0-0 in the playoffs with a .942 Save Percentage and a 1.78 Goals Against Average.

The Cleveland Monsters are now 3-3 in the playoffs. With the series heading to Cleveland, the Monsters will now have the advantage of home ice as they look to claw their way back into the series. The Marlies have been stellar on the road, picking up two wins in Rochester in their first-round sweep of the Americans. They have a league-best power play (40%) and penalty kill (100%) when playing away from the Coliseum this postseason.

Players to watch: Jeremy Bracco recorded the primary assist on Mueller’s first period power play goal and had the lone assist on Carcone’s game-winning goal in overtime. Bracco is tied for the lead in assists (8) and has tallied 10 points total through five games. Egor Korshkov scored his first AHL career goal at 18:23 of the second period in his first AHL game on Friday. Rasmus Sandin recorded the primary assist on Korshkov’s second period goal. Sandin has picked up seven assists through five games, leading all defencemen and rookies.

Puck drops at 3PM today on Leafs Nation Network and AHLTV. Fans across Canada can also atream the game live in the Maple Leafs app. Follow the Marlies on Twitter and Instagram for behind-the-scenes action from the Rocket Mortgage Fieldhouse.