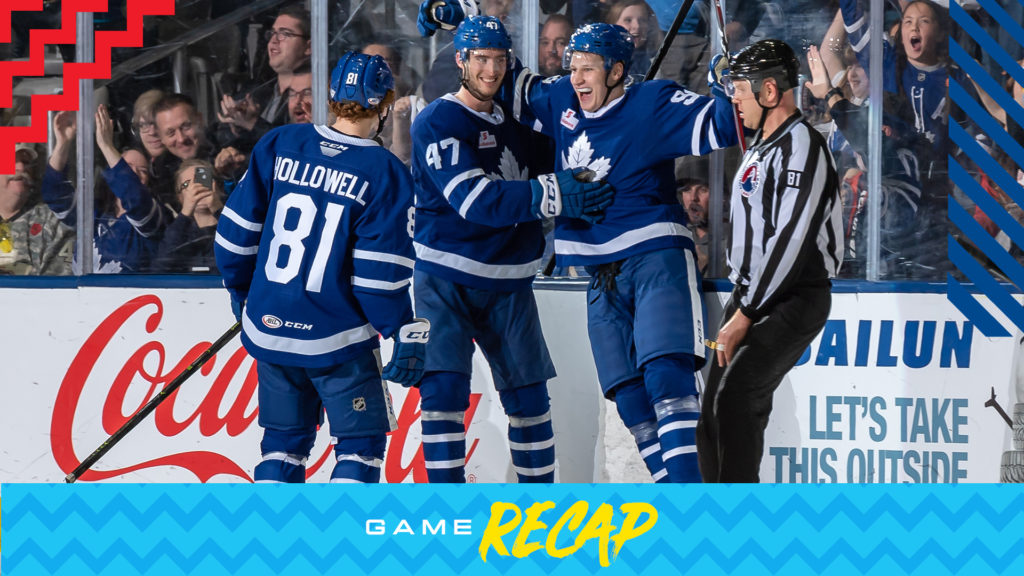 The Toronto Marlies picked up their fifth straight postseason win Friday night to take a 2-0 lead in the best-of-seven North Division Finals. Egor Korshkov and Joseph Duszak each registered their first career AHL goals and Michael Carcone provided the overtime heroics as the Marlies edged the Monsters in extra time.

Toronto opened the scoring at 7:42 of the first period. Jeremy Bracco found Chris Mueller at the side of the goal and he made no mistake burying his fifth of the postseason. Dmytro Timashov registered the secondary assist on the goal. Two minutes later, Joseph Duszak let a one-timer from the point fly and beat Brad Thiessen to put the Marlies up by two. Pierre Engvall and TImashov assisted on Duszak’s first of his AHL career. Late in the frame, Cleveland cut their deficit as Sonny Milano found the back of the net to get the visitors on the board. The Marlies were ahead by one after 20 minutes of play.

The Monsters evened things up early in the second with a goal from Dan DeSalvo. The score stayed locked at 2-2 for the majority of the frame before Egor Korshkov brought the crowd to their feet, beating Thiessen five-hole for his first career AHL goal. Rasmus Sandin and Mac Hollowell assisted on the goal. The Marlies held a 3-2 lead heading into the final frame.

Similar to the second, the Monsters came out and scored a quick goal to even the score back up. Ryan Collins scored just 40 seconds into the frame to make it 3-3. The game remained tied at the end of regulation.

Just over a minute into extra time, Jeremy Bracco carried the puck into the offensive zone and dropped a pass to Carcone who fired a one-timer from the hashmarks and beat Thiessen top shelf to win it.

The Marlies now head to Cleveland with a 2-0 series lead. Game three goes Sunday at 3PM.

On tonight’s game:
Well, this time of year you need results and the fact that we could find a way to get a win in a game like this with the way that we played and the way that they played, they played very well and we didn’t have it tonight. To get a win is a very good sign for our team.

On Joseph Duszak and Egor Korshkov’s goals:
Obviously both guys found ways to shoot it in the net for us. A great job by Duszak on his goal to be in a good spot. We did a good job to drive that puck down the rink and set ourselves up for Korshkov at the net. It was a good goal for us. On Korshkov’s goal, he showed really good instincts to jump on his check in the neutral zone and to make himself available there and found him in the middle and takes the shot. I thought he showed a lot of good skill today, a lot of good patience and poise with the puck for his first game and his first time in this league, first time on smaller ice and all that kind of stuff. That was very encouraging. We didn’t have a great deal of positives here in the game today. But certainly those guys getting their first goals.

On Korshkov’s physical presence in the game:
For sure, he was involved physically. That’s a part of his game and part of who he is. For him to feel comfortable enough to make his presence felt physically in the game, that was very positive.

On Trevor Moore rejoining Adam Brooks and Mason Marchment on a line:
Not a lot was working with our game so it was some portion of the second period there after the timeout, I thought it was the time to mix things back up. I had fully intended on that line, Mooresy with that line, reuniting at some point. Whether it was back-and-forth throughout a game or full time, I knew I was going to make that switch at some point. It felt like the right time today. We decided to juggle some things up a little bit. We tried to break up what was going on because it wasn’t good enough.

On adding more physical presence to the lineup in Game 3:
We’re going to look at it, we’re going to see. First of all, see how guys get through the day with injuries and what not. We didn’t have a great game today. They played extremely well, credit to them. They made life real difficult for us. So, we’ll look at the video, we’ll discuss any changes we might want to make. I didn’t think the lineup had much to do with it. I just thought we didn’t have it today, whether it was with the puck or without the puck. Defensively, we didn’t skate, we weren’t competitive. There’s a lot of things that we need to do a lot better. The good news is we found a way to win. I thought that was really kind of the first real playoff game that we’ve played frankly. Obviously we played three games in Rochester. We had an overtime game in Game 2 there as well. But this was a different pace, it was a different level of physicality. Their structure was very good today. There wasn’t a lot of opportunity for us, especially early in the game. We were adjusting to that and I thought a lot of our young players in particular struggled with that and even some of our veteran guys just didn’t have it today so it was a different type of game and something we’re going to have to adjust to in Game 3 especially in their building. It’s going to be loud, it’s going to be a great crowd. All of those types of things that they do a real nice job there with the fans’ support in that building. We’ll have to be ready.

On Kasimir Kaskisuo:
He was excellent. He’s really shown that the more work that he gets the sharper that he is. He really revealed that in the Rochester series. He didn’t have a lot of work in Game 1 but today he was tested a lot. He was really solid for us. I thought that goal in the second period, he probably wants back but he battled and made big saves for us there the rest of the way.

On his first goal:
Just like to jump in the play. That’s what I’m known for. As soon as (Engvall) pulled up, I knew I had to shoot the puck. So I was just trying to get it on net and luckily, it went in.

On learning from other young Toronto defencemen:
It’s a lot of fun. They’re your age so you can relate to them, what they’re going through. (Sandin and Liljgren), they’ve been here all year so they’ve been helping me and Mac (Hollowell) a lot. Just listening to them and they’ve got a whole year under their belt. Taking everything they say and just putting it in the back of my brain.

On playing with Mac Hollowell:
Me and Mac are kind of the same. We like to the move the puck and join the rush. Mac’s a good guy. We hang out on the and off the ice. Just playing with him has been great.

On being a offensively productive defenceman:
Most defencemen now a days are small, young guys like me who move the puck. The game’s been shifting towards younger D, smaller D so good thing I was brought up in this generation and not in the ‘80s and ‘90s. That’s a plus.

On his first game in North America:
It’s very important for us to win the game. And of course for me personally, it was such a great feeling for me to score in front of my Dad here tonight.

On leaving the KHL and coming to Toronto:
It was difficult devision to make and I obviously hesitated in the beginning but since I arrived, everything’s been great.

On showing a physical side in his first game:
I was just trying to show my hockey style. I didn’t want to let the team down. I wanted to play my best and I hope it worked.

On playing on smaller ice:
I find it’s very interesting. I do like the fact that on the smaller ice, you have to make decisions a lot quicker, not to mention the physical part of it and the importance of physicality.

The Toronto Marlies extended their postseason win streak to four on Wednesday, taking a 1-0 lead in the second-round best-of-seven series against Cleveland. After going down by one in the first period, the Marlies came out firing in the second period, tallying four goals to find themselves up 4-2 after 40 minutes of play. Trevor Moore added an empty net goal late in the game to seal a 5-2 win on home ice.

Special teams continue to be important for the Marlies as Toronto was 3-for-4 on the penalty kill and was 4-for-7 on the power play on Wednesday. The Marlies’ league-best postseason power play (40%) has converted six times, while the penalty kill (84.6%) has picked up a shorthanded goal and allowed only two goals against. Kasimir Kaskisuo stopped 14 of 16 shots he faced on Wednesday, improving to 4-0 in the playoffs with a .949 Save Percentage and a 1.49 Goals Against Average.

Players to watch: Jeremy Bracco recorded four assists on Wednesday, tying a team record for number in assists in a game. He sits second amongst AHL skaters with eight points (2 goals, 6 assists) in four games. Rasmus Sandin has recorded six assists through four postseason games, leading all defencemen and rookies. Chris Mueller had two points in Wednesday’s game, including a power play goal. He leads the league in power play goals with three. Cleveland’s Tommy Cross (1 goal, 1 assist) and Mark Letestu (1 goal, 1 assist) each picked up two points on Wednesday.

With the tone now set, the Marlies will look to continue their streak tonight and head to Cleveland with a 2-0 series lead. Puck drops at 7:00PM on Leafs Nation Network, TSN 2 and AHLTV. Fans across Canada can also stream the game live in the Maple Leafs app. Follow us on Twitter and Instagram for behind-the-scenes access at Coca-Cola Coliseum.