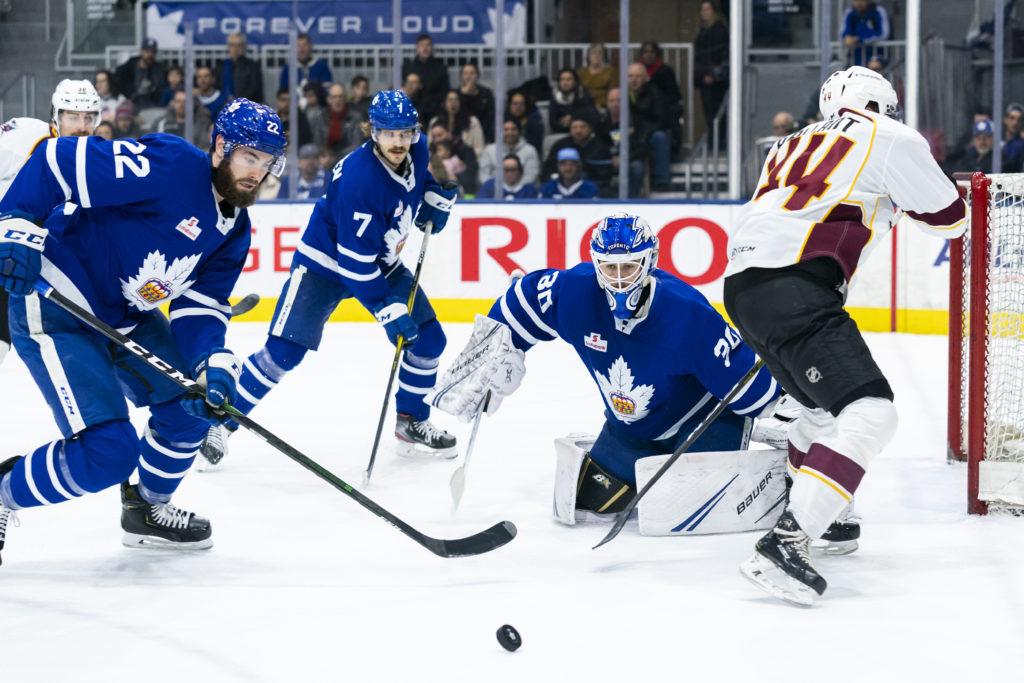 The Toronto Marlies close out 2019 with a tough loss on home ice, falling 4-1 to the visiting Cleveland Monsters.

The Monsters opened the scoring at 13:20 of the first period with a goal from Paul Bittner. The visitors outshot Toronto 9-7 in the opening frame and held a 1-0 lead through 20 minutes of play.

Kenny Agostino got the Marlies on the board at 9:17 of the second period. Timothy Liljegren found Agostino coming out of the penalty box and Agostino walked into the zone, picked his spot, and fired a shot underneath the glove of Veini Vehvilainen. Matt Read had the secondary assist on Agostino’s 17th of the season. Kasimir Kaskisuo turned away 16 shots in the second to keep the score locked at one apiece heading into the final frame.

The Monsters added three unanswered goals in the third, including an empty netter to improve to 15-15-1-2 on the season. The Marlies peppered Vehvilainen with 16 shots but couldn’t find the back of the net to cut the deficit.

The Marlies will head to Syracuse on Friday before returning home to host the Rochester Americans and Lehigh Valley Phantoms this weekend.

A DECADE OF MARLIES

On Kasimir Kaskisuo:
He definitely made big saves. He’s been playing well lately. He had a good weekend this past week and it’s just one of those nights. I thought their goalie played really well, too. We had some backdoor empty nets on the power play we just couldn’t finish on, so we got our looks. Our staff really liked our process, our energy and a lot of things that we talked about the guys were executing. So, we’ll just build on focusing on the process and not the result.

The Marlies will close out the decade on home ice today as they host the Cleveland Monsters for the third time this season.

Toronto will be looking to bounce back from a tough 6-1 loss to Laval on Saturday, and get back in the win column heading into 2020. The Marlies sit in third place in the North Division and fifth in the Eastern Conference with 41 points. Pontus Aberg leads the way for the Marlies with 27 points (12 goals, 15 assists) through 26 games while Jeremy Bracco holds the team lead in assists with 23. Bracco has assists (5) in four consecutive games.

The Monsters have a quick turnaround, returning to action today after dropping a 3-1 decision to the Charlotte Checkers last night. The Monsters are 3-6-0-1 in their previous 10 contests and currently sit in seventh place in the North Division and 13th in the Eastern Conference.

The Marlies hold a 2-0 lead in the regular season series against the Monsters after picking up back-to-back wins on home ice in October. The Marlies are 9-5-2-1 against North Division opponents and they have home ice on their side today, which has proven to be advantageous to the blue and white with their current 12-4 home record.

Puck drops at 3:00 PM on Leafs Nation Network and fans across Canada can also stream the game live in the Maple Leafs App.