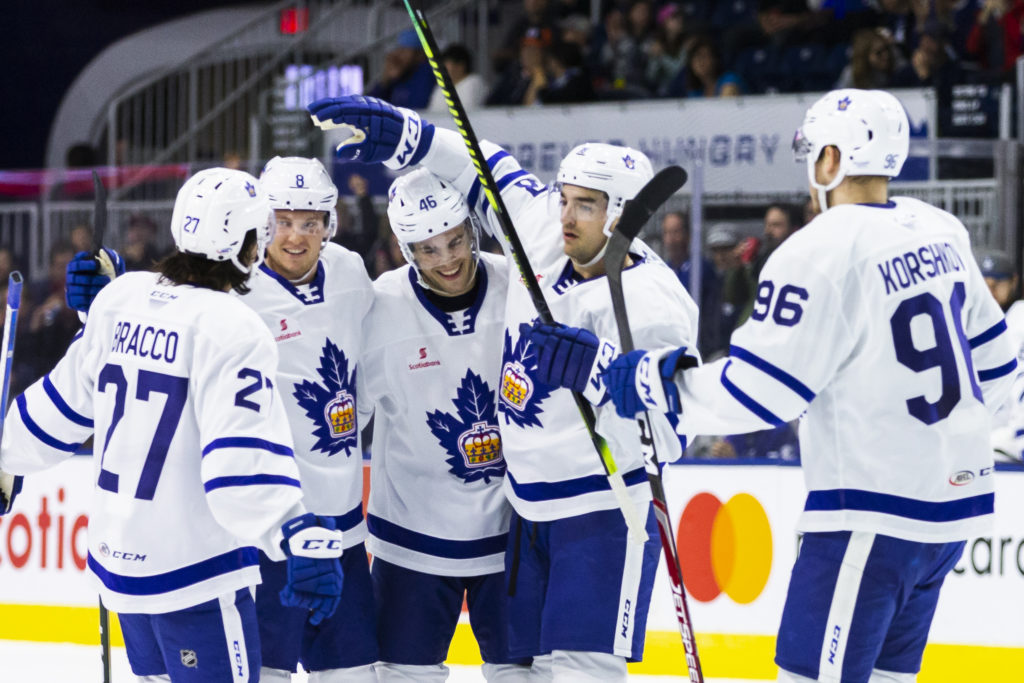 The Marlies picked up their sixth straight win Sunday, edging the Cleveland Monsters 6-5 in a shootout.

Today’s game looked much different than yesterday, with the Monsters striking first and taking a 2-0 lead halfway through the opening frame. The Marlies rallied and battled back with two late first period goals to even the score heading into the first intermission. Rasmus Sandin opened the scoring for the Marlies at 18:28, firing a rocket from the point on the power play. Pontus Aberg and Egor Korshkov assisted on the opening goal. Less than a minute later, Aberg went bardown off a faceoff to tie things up. Pierre Engvall picked up the assist on the goal and the game was tied at two apiece after 20 minutes of play.

The Monsters answered back early in the second period with a shorthanded goal to restore their lead. From that point on it would be a back and forth affair with the Marlies battling back each time to tie things up. Tanner MacMaster scored the Marlies’ third goal just over a minute later at 4:37 to answer back and even the score. The Monsters then capitalized on a power play and regained the lead at 6:17 of the second. At 11:58, Kenny Agostino sent the puck out from behind the goal and it bounced in off Matiss Kivlenieks’ back and the score was even 4-4 heading into the final frame.

Justin Scott added his second of the game at 12:02 of the third period as the Monsters found luck on the power play again. At 13:48, Rasmus Sandin connected with Garrett Wilson in front of the Monsters’ goal and he fired home his first of the season to tie the game at 5-5.

Extra time wasn’t enough to solve this one and the game headed to a shootout. Kenny Agostino and Egor Korshkov scored in the shootout, but it would be Korshkov’s goal that would be the eventual game winner. Joseph Woll picked up his second win of the season in his first start on home ice.

On what this win says about his team:
It was a good sign of some resilience. We’ve been winning all sorts of different ways and this is a unique one here today. But I liked how our guys stayed with it. The way that our season’s gone, it could be a little bit easier to say that it’s not really our day, and some of the bounces were catching up to us but I like how we fought right to the end. A penalty kill in overtime, we grind that out after it was a tough night for the PK. Joe Woll stands strong right to the very last shot to win the shootout. A lot of really good signs for our guys to persevere through it.

On whether he thought Joseph Woll became more comfortable through the game:
I did. I also thought that we did a little more to help him out. When you look at the first few goals there, there’s a backdoor tap in, a high tip on the power play, a breakaway. We have to do a better job of helping him out there. I thought he made some good saves and then he got tested in the shootout, obviously, and he aced that test.

On the line of Pierre Engvall, Pontus Aberg and Garret Wilson:
I thought they were really good. I liked all three guys today, all three guys were creating. Garrett Wilson, you can tell, is finding his legs and finding his game. Obviously, we didn’t see him in Leafs camp because of his injury, and it’s taken a while to get him up and running here but he’s showing why he spent the better part of last season in the NHL, he’s a very serviceable guy. He scored a big goal, does a lot of things the way you want them to be done for a guy who has his skillset. We really liked that line. Pierre Engvall was really skating today, Pontus Aberg scored a goal and had some chances, made plays. We needed that line to create offence, and they did.

The Marlies close out their three-game homestand today in the second half of a back-to-back against the Cleveland Monsters.

The Marlies blanked the Monsters 2-0 in yesterday’s game, earning their fifth straight win; their best start in franchise history.

After tipping in a point shot from Timothy Liljegren yesterday, Egor Korshkov is now the only Marlie to record a point (5-1-6) in each game this season. Toronto was 2-for-2 on the penalty kill and was 1-for-4 on the power play. The Marlies have not allowed a goal on the penalty kill this season. Toronto’s power play is second in the league at 29.4% (5/17). “They’ve been very key, of course, especially here in this building,” said Sheldon Keefe following yesterday’s win. “Special teams and goaltending have been the backbone of our wins on home ice so that continued today.” Kasimir Kaskisuo picked up his eighth career shutout and first of the season with last night’s 30-save effort.

The Marlies will look to build on their strong start to the season today before heading out on a seven-game road trip.