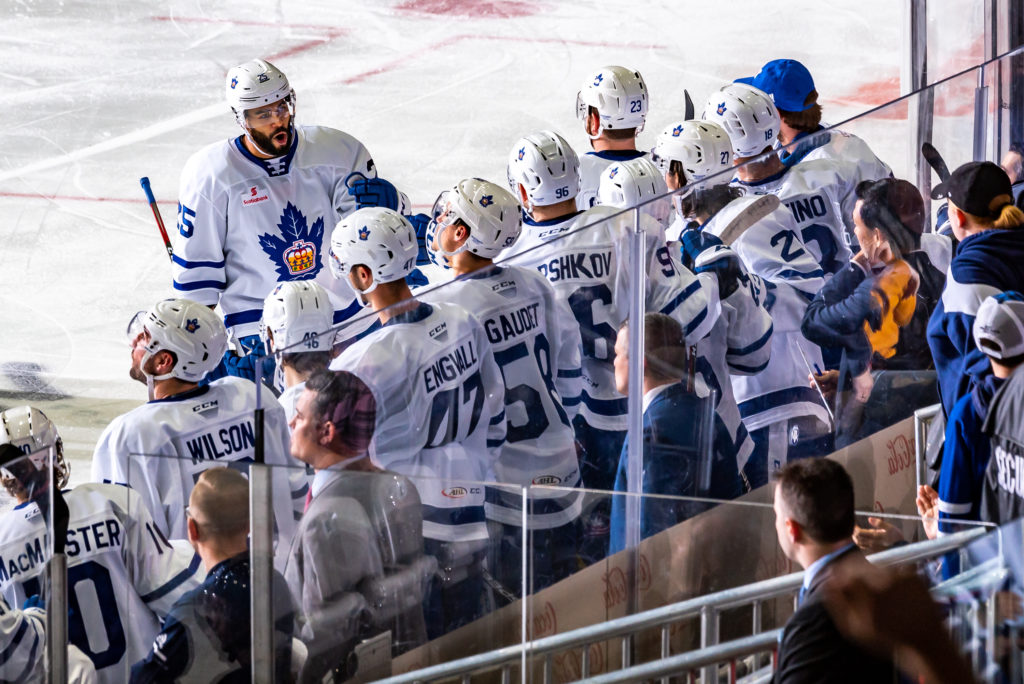 The Marlies extended their winning streak to five games Saturday, shutting out the Cleveland Monsters on home ice. After today’s win, the Marlies are off to their best start in franchise history.

Darren Archibald opened the scoring in the second period, picking up his first goal of the season to give the Marlies a 1-0 lead. Timothy Liljegren and Rasmus Sandin picked up the assists on the opening goal.

Near the midway point of the third, Egor Korshkov tipped in a point shot from Liljegren to extend the Marlies’ lead to 2-0 with his fifth goal in as many games. Matt Read had the additional assist on the goal.

Kasimir Kaskisuo picked up his eighth career shutout and first of the season in a 30-save effort. He has a 1.51 GAA and a .947% to start the season. The Marlies remain perfect on the penalty kill (16/16) and picked up a power play goal.

The Monsters and Marlies will meet again tomorrow for the second half of their back-to-back at Coca-Cola Coliseum.

On the success of special teams through five games:
They’ve been very key, of course, especially here in this building. Special teams and goaltending have been the backbone of our wins on home ice so that continued today.

On Kasimir Kaskisuo’s shutout and limited Cleveland to six shots in the third period:
I thought it was less about tightening things up defensively. I didn’t think we were bad defensively, I thought it was more offensive issues today for us. In the third period we thought we controlled the puck a lot better and as a result controlled the play a lot better. I think part of it, I’m sure, is just a little bit of fatigue on Cleveland’s part, playing last night and all of that. They threw a lot at us in the second period and we were able to withstand it thanks to Kas and his play and that gave us a chance to settle things down in the third.

On Darren Archibald:
I thought he was really good (today). Obviously, great goal. Builds a lot of speed through the neutral zone and then attacks the net right away. We’re trying to attack the net more as a team, and that’s what he does very well, and we’ve seen that a lot over the years here in the division when he’s been playing against us. Good to see that contribution and I thought we got good shifts out of that line with MacMaster and O’Brien. It’s kind of a makeshift line for us with MacMaster playing centre with Brooks being out and O’Brien just joining us today. We got some good shifts out of those guys. Everybody had good moments in the game today. As we know, especially with that second period, there’s a lot we want to be able to do better particularly with our execution offensively.

On Hudson Elynuik and Kristians Rubins’ play:
I thought they played well. Elynuik’s been playing well, he’s just been playing so hard. He’s putting everything that he has into every shift. That’s making it easy to put him over the boards. Even if there happens to be a mistake, he’s just competing his way out of it and making up for it. I thought he was really good and Rubins is the same. He hasn’t played here for a little bit but stepped in, played more minutes than I think he’s played in previous games, and he did a good job.

On Adam Brooks’ injury:
He took an inadvertent bump in practice yesterday and as a result wasn’t feeling right. More precautionary that we held him out and I expect that’s going to continue tomorrow and we’ll see how it’s going to progress from there.

The Marlies will look to build on a four-game winning streak this weekend when they take on the Cleveland Monsters in back-to-back games at Coca-Cola Coliseum.

The Marlies’ offence has been firing on all cylinders to start the season, outscoring their opponents 15-6 over the past four games. Special teams have been crucial to the Marlies’ success so far, and the penalty kill has been dominant, not allowing a goal in 14 shorthanded situations and adding a shorthanded goal for. The Marlies have the second-best power play in the league, recording four goals in man-advantage situations.

The Cleveland Monsters (3-2-0) snapped a two-game losing streak last night with a 4-3 shootout win over the Rochester Americans. They’ll be looking to build on last night’s victory and get a winning streak going during this three-in-three weekend.

Coming into tonight’s game, Jeremy Bracco leads the Marlies with six assists through four games. Egor Korshkov is not far behind with five points including a goal in every contest so far this season. Kasimir Kaskisuo holds the team lead in wins with three.

The Monsters and Marlies are set to face off eight times this season, starting tonight with tonight’s game at Coca-Cola Coliseum. Puck drops at 4:00 PM on Leafs Nation Network. Fans across Canada can also stream the game live in the Official Toronto Maple Leafs App.