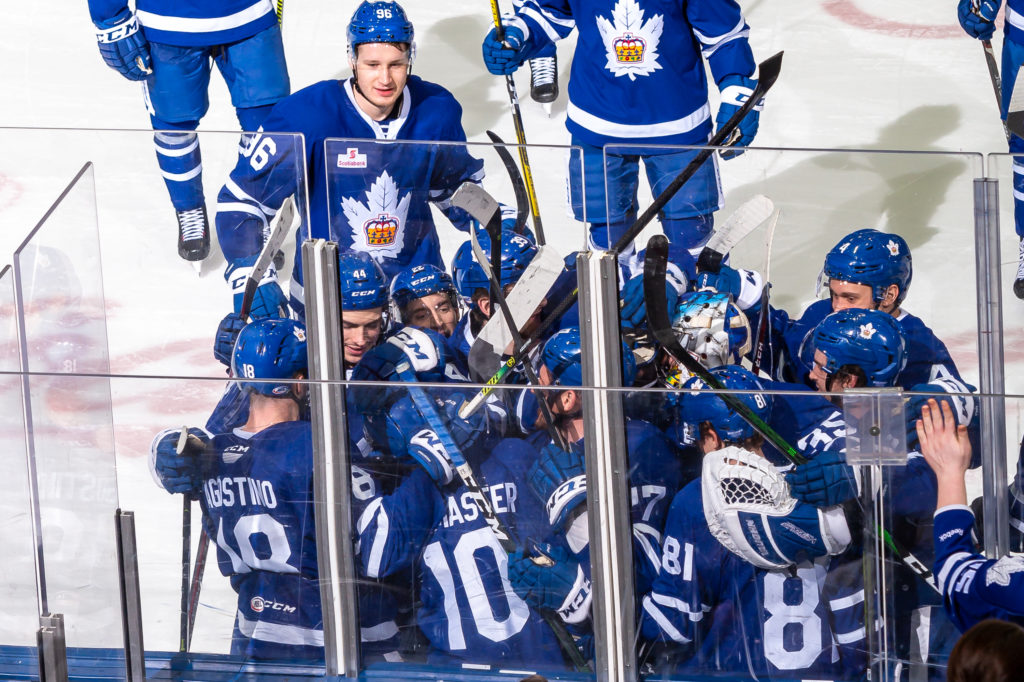 The Marlies found their way back into the win column on Wednesday, edging the visiting Cleveland Monster 4-3 in overtime.

Newcomer Miikka Salomaki made an entrance and opened the scoring at 3:48 of the first period. Kristians Rubins and Tyler Gaudet assisted on Salomaki’s first as a Marlie. At 7:24, Michael Kapla extended the lead to 2-0 with his first as a Marlie. Kapla walked through the slot before beating Vehvilainen with a dart. Late in the frame the Monsters closed the gap and cut the Marlies lead in half to make it 2-1 heading into the first intermission.

Tyler Gaudet restored the Marlies two-goal lead early in the second period, tipping in a shot from Teemu Kivihalme on a Marlies power play. The Monsters responded with two power play goals of their own to knot things up at 3-3 heading into the final frame.

The Marlies limited the Monsters to only two shots on goal in the final frame, but couldn’t find the back of the net to break the deadlock.

23 seconds into the extra time, Kenny Agostino found Tanner MacMaster in front of Cleveland’s goal and MacMaster got his stick on the puck, redirecting it past Vehvilainen to seal the win for Toronto. With the win, the Marlies moved into fifth place in the North Division with 59 points, two points back from the fourth place Syracuse Crunch.

Toronto will head out on the road for a pair of divisional games this weekend against Utica and Binghamton, before heading down south for their makeup game against the Texas Stars on Monday.

On today’s game:
They found their way again. First period I thought was pretty good too. Second period got away from us. Special teams were not up to par. I really liked our last look there on the power play in the third. We made a couple adjustments and they executed really well, we just didn’t find it. But third period was great. The guys knew it was a really two important points and had to find it.

On special teams:
Yeah, chances were there. Their goaltender played well. Special teams are always a rollercoaster. You get streaky on and off and hopefully we can find an ‘on’ streak soon.

On the recent additions of forwards Matt Lorito and Miikka Salomaki:
Great additions to the team. Salomaki had great chemistry with Gaudet and Read. They spent the majority of their game in the offensive zone mostly because they worked hard. They moved their feet, they take away time and space, and then when they did get the puck they had good movement, they stayed in motion and they were predictable to play with. And then Lorito was great. Really good addition to the power play. He has a knack for making plays on the walls. He attacks downhill and we’re really excited to have him.

On playing with Matt Read and Miikka Salomaki:
Salomaki came in and he had a great game. He gelled well with us. As you know, Read’s obviously a great player and he’s been hot lately so the three of us just kind of gelled and it worked out nicely.

On Tanner MacMaster:
He’s chippy and he’s fast and skilled. He’s been producing for us a lot and I’m just happy he got that in (the overtime goal) and it was a great play by Agostino as well. Good to finish it off that way.

On his first game with the Marlies:
I felt really good, I enjoyed every moment. Obviously we got a good start and it helped a lot. There was a lot of things I could still do better, especially with new systems and stuff but I felt good and our line played well and guys made it easy for me.

The Marlies hit home ice this morning for an early North Division clash with Cleveland.

This is the sixth of eight meetings between these North Division rivals, and the Monsters currently have a slight edge in the regular season series having won three of the previous five contests. Toronto opened up the series with back-to-back wins over Cleveland, but the Monsters have since taken the lead, winning the three most recent contests against the Marlies. With three straight losses and only four wins in their previous 10 games, the Marlies will be looking to find their way back to the win column today and even up the regular season series against the Monsters.

Cleveland comes into today’s game fresh off an overtime win over the Rochester Americans. The win snapped a four-game losing streak for the Monsters, who currently sit in seventh place in the North Division with 53 points.

Toronto currently sits four points back from a playoff spot, and with the race heating up in a tight North Division, the Marlies need to pick up points in these tough divisional matchups. Expect some changes to the Marlies lineup as new additions look to make a swift impact and help right the ship in terms of getting the team back into playoff contention. Max Veronneau, Miikka Salomaki and Matt Lorito bring a fresh energy to the Marlies’ offence, while the return of Calle Rosen provides some depth and familiarity to the Marlies’ blueline.

Puck drops at 11AM today on Leafs Nation Network. Fans can also stream the game live in the Maple Leafs app.