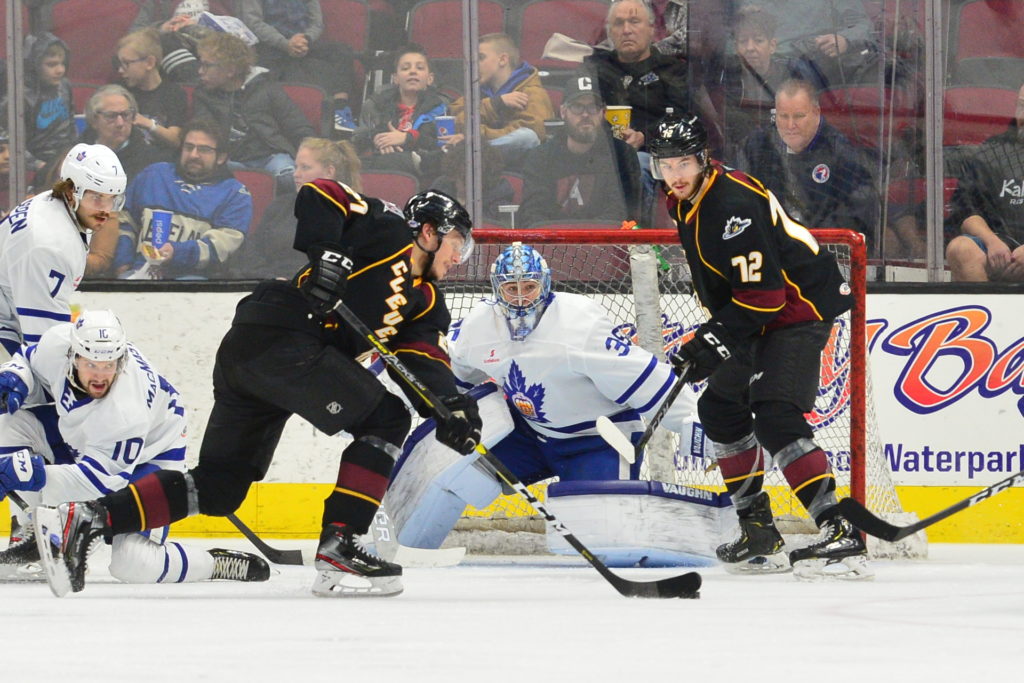 The Toronto Marlies closed out their annual boat show road trip today, picking up a point in a 5-4 overtime loss to the Cleveland Monsters.

Ben Harpur opened the scoring at 14:25 of the first period, kickstarting a scoring frenzy with his first of the season. Pontus Aberg and Darren Archibald assisted on the opening goal. 30 seconds after Harpur’s goal, Nic Petan launched a one-timer from the point to put the Marlies ahead 2-0. Kristians Rubins and Aberg picked up the assists on Petan’s ninth of the season. 13 seconds after Petan’s goal, Cleveland’s Derek Barach brought the home crowd to their feet, getting the Monsters on the board and cutting the Marlies’ lead in half. 19 seconds after Cleveland’s goal, Tanner MacMaster tapped one in from the side of the goal to restore the Marlies’ two-goal lead. Garrett Wilson and Mac Hollowell assisted on MacMaster’s ninth of the season. The Marlies’ three goals in one minute chased Veini Vehvilainen from between the pipes as Matiss Kivlenieks entered the game in relief. Again, the Monsters were quick to respond and closed the gap with just over a minute remaining in the period. Toronto had an 11-10 edge in shots on goal in the opening 20 minutes and held a one-goal lead heading into the first intermission.

The Marlies held the Monsters to only four shots on goal in the second period, while they tested Kivlenieks with 15 shots but couldn’t find the back of the net. The score remained 3-2 after 40 minutes of play.

The Monsters pulled ahead at the halfway mark of the final period, netting back-to-back goals 10 seconds apart to make it 4-3. The Marlies kept up their pressure and it paid off at 15:39 when Kenny Agostino wired a one-timer from inside the faceoff circle to even the score 4-4. Aberg and Mac Hollowell assisted on Agostino’s 21st of the season. The game remained tied at the end of regulation.

The Marlies were called on a tripping penalty just 55 seconds into overtime, resulting in 4-on-3 action for two minutes. The penalty kill went to work and killed off the infraction, but the Monsters converted shortly after the penalty expired to come away with the two points.

The Marlies will have a few days off for the AHL All-Star break before kicking off a a three-game home stand on Friday against the Charlotte Checkers.

On what improvements he saw from Toronto:
There was a lot of improvement. You can definitely look at our past and what the record has been as of late and fall back on that. But if you just look at this one game, the team put in a great effort. I thought the team really competed hard, much better in our d-zone, our fifty-fifty battles, our o-zone looked great tonight, got a lot of interior shots something’s that we’ve been missing in the past. The players really executed a lot that we asked of them today.

On Matt Read (6 shots):
He probably had four or five grade A chances. He really showed up in the game, helped our team find some momentum, some energy and he was one of the guys that really got interior and helped threaten.

On Pontus Aberg (3 assists):
He’s a big part of our team, he’s a top-six forward. He has a ton of ability and talent. When he brings it consistently with his effort and his compete and what he did tonight, he’s a heck of a hockey player.

On the AHL All-Star break:
I think every team in this league needs a break. It’s a long season. We’ve been through a lot lately, battling some consistency stuff. This break will be good for us. We’ll come back from it fresh. We’ll get back to our routine and back to building details and habits that we want to build and we’ll find positives out of tonight and what the team did.

The Marlies wrap up their eight-game road trip today, squaring off against the Monsters in the second half of a back-to-back in Cleveland.

Toronto faced another tough loss last night, falling 5-2 after two empty net goals in the final minute of play sealed the win for the Monsters. With the regular season series between these north division rivals now even at two apiece, an important two points are on the line as the Marlies look to climb their way out of this slump and back into a playoff position. The Marlies are 2-7-0-1 in their past 10 games and will want to close out this road trip on a high note before heading back to Toronto for a three-game home stand.

With two assists in last night’s contest, Timothy Liljegren now has 12 points (2 goals, 10 assists) in his last 10 games and has recorded a point (1-9-10) in eight consecutive games. Yesterday was Liljegren’s sixth multi-point game of the season.

It’s a quick turnaround for both teams as puck drops at 1:00 PM at the Rocket Mortgage Fieldhouse. Fans can catch the action on AHLTV or follow along on Twitter (@TorontoMarlies) for live updates.