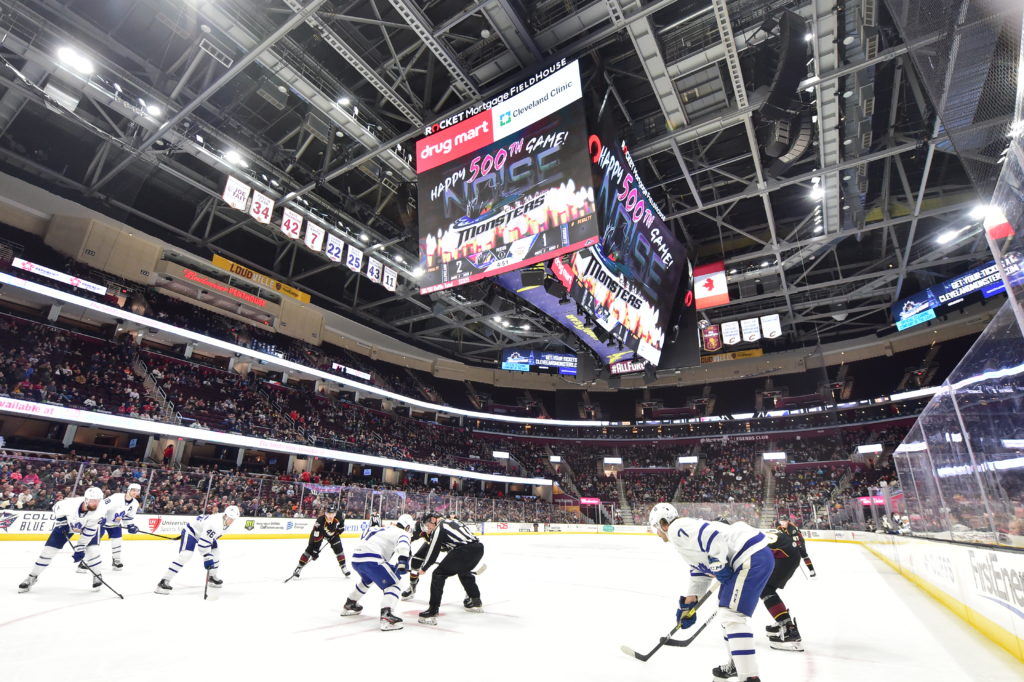 The Marlies did not get the start they wanted tonight, finding themselves in an early hole when Cleveland’s Dillon Simpson notched back-to-back goals at 1:28 and 3:37 of the opening frame. Although the speedy  two-goal lead stunned the Marlies, they were quick to respond as Trevor Moore found the back of the net to get the Marlies on the board and cut Cleveland’s early lead in half. Timothy Liljegren and Nic Petan assisted on the goal. Shots on goal in the opening frame were 12-11 in favour of the home team, who led by one after 20 minutes of play.

Trey Fix-Wolansky restored Cleveland’s two-goal lead at 6:35 of the second period, capitalizing on a power play opportunity. It was the lone goal of the frame and gave the Monsters a 3-1 lead heading into the final frame.

The Marlies peppered Monsters’ goaltender, Matiss Kivlenieks with 14 shots in the third period, but couldn’t find the back of the net until late in the frame when Nic Petan sent a pass through traffic to Jeremy Bracco who wired a wrist shot top shelf from the hash marks. The goal brought the Marlies within one with 1:44 remaining in the period. Kasimir Kaskisuo left the crease to allow for an extra attacker as Toronto looked to force things into overtime, but the Marlies couldn’t keep possession and the Monsters added two empty net goals in the final minute to seal a 5-2 win.

The Marlies will have a chance to rebound in tomorrow’s rematch against the Monsters in their final game of the Boat Show road trip.

On whether he saw improvements in Toronto’s play tonight despite the loss:
I think for a lot of people you could say that results are needed, we’ve been working together through a lot as a group. There was a lot of good stuff in today’s game. Again we’ve been talking about the starts of our games, again today was not good enough. We lost the game in the first five, ten minutes. We’ll keep reiterating that but we can’t expect to come out that slow. The lack of intensity in the D-zone is a problem, it got better as the game went on but we’ve got to be able to manufacture that from the start.

On whether defensive zone issues have impacted Toronto’s penalty kill:
Yes and no. It’s a little bit different. The concept’s the same. As soon as the pucks out of their hands and they’re not under full control, we’ve got to be able to close and outnumber somebody and win a battle and then exit. So in that sense, yes. There were moments in the game still where we do that but it’s not consistent enough. I thought the second half of the ice towards their net, we did a lot of good stuff. Some better o-zone than we’ve seen in the last games and we threatened the net a lot better.

After a brief return home this week, the Marlies are back on the road this weekend to close out their annual Boat Show road trip with a back-to-back against the Cleveland Monsters.

Both teams will be looking to get back in the win column in tonight’s divisional matchup. The Monsters have dropped their previous two outings and are 4-5-1-0 in their past two games. The Marlies will surely be looking to bounce back after tough losses in Charlotte last weekend left the team somewhat deflated. ” I think the whole group’s frustrated, said head coach Greg Moore following Sunday’s 7-3 loss to the Checkers. “We all haven’t been good enough. It’s going to take a group effort to climb our way out of this. Can we? Yes. Will we? Yes. Today’s another frustrating day. We’re going to find a way to right the ship.”

After a few days of practice at home, that’s exactly what the Marlies will be looking to do tonight. Toronto will be looking for some consistency in their game and a full 60 minutes, as they aim to snap a three-game losing skid and turn things around before heading back to Coca-Cola Coliseum for a three-game home stand.