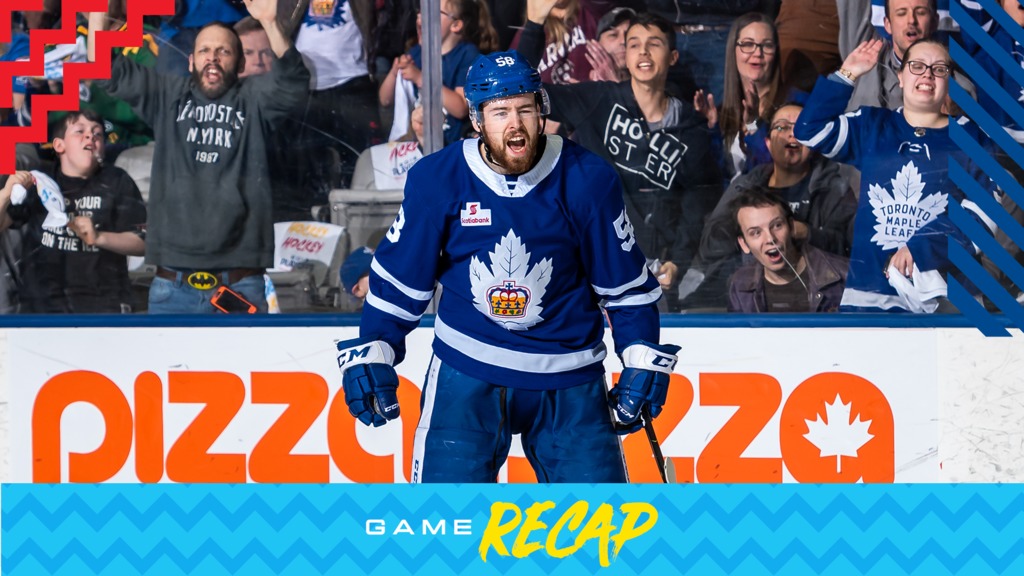 Michael Carcone scored a hat trick on Thursday night to lift the Marlies to a 4-3 overtime victory in Game 4 of the Eastern Conference Finals.

Carcone opened the scoring at 17:12 of the first period, scored his second goal of the game at 5:07 of the third period and completed his first professional hat trick with the game-winning goal at 7:29 of overtime.

The Checkers got on the board early in the second period after capitalizing on a misplay behind the Marlies’ net. It was a tough back and forth battle from then on and the Marlies found themselves down 3-2 midway through the third period. At 11:16 of the final frame, Jeremy Bracco sent the puck to the net and it re-directed off traffic in front to even the score 3-3. The game remained tied for the remainder of regulation, sending things to sudden death overtime.

The overtime winner came at 7:29 when Carcone picked up the puck in the neutral zone and rushed down the right-hand side before wiring a low wrist shot past Nedeljkovic.

The Marlies and Checkers return to action tomorrow night for Game 5 with the series tied at two.

On the team’s resilience:
It was really good, but we didn’t like our game today. There was a lot of the game that they were the better team. Part of that third period there they took it to us pretty good. We got a goal that brought us to life and we got back from there. So, that was just so nice to see our guys feed off some positive energy and then just not look back.

On the team’s speed:
It was certainly the strength of some guys’ game today. Carcone being one of them with the overtime winner was a nice example of how he skated today. It was really the first game of this series where he was really able to get his feet moving and get skating and put the defence on their heels, that’s what he does best. So, it was good to see him come alive. But I thought the Engvall, Korshkov, Timashov line had a lot of speed and transition as well. There’s good parts in the game for sure, nothing better than of course winning it. This is, of the four games probably the game in which they took it to us the most of any other. I thought we’ve been quite good in the other three, but we find a way to win the game, puts us all square here now and we get a chance tomorrow to respond again and build off this and to finish things off, our final home game in this series and to put us in a good spot to go on the road. That’s what we’re playing for tomorrow.

On Michael Carcone:
He’s been good. I think he’s been kind of finding his way. I think he was sort of tip-toeing a little bit early on as he was trying to get comfortable, as we were trying to get comfortable with him and try to figure out where the best place to play him, how do we use him, is he going to be a right winger, is he going to be a left winger, who are his line mates going to be? He batted concussion issues for a little while that derailed him, slowed down his integration to our team but he was playing really good hockey for us through the tail end of the regular season. We put him on that line to be a skater on the Mueller, Bracco line, you see when he does move his feet like he does today, he’s a pretty dominant player and tough to slow down.

On the value of adversity going into the postseason:
Well in that sense, it was a lot like our season the way that it’s gone, there’s been a lot of uncertainty in our season. We’ve found our way here to this point, but we’re a team that really in the last month of the season, we weren’t even sure if we were going to make the playoffs. We were battling, trying to solidify ourselves, so there’s been a lot of uncertainty. So, it’s not like uncommon ground for us. We hope that can help us in terms of just staying calm and just playing and remaining resilient and having fun and enjoying the moment. It’s so important for us to just enjoy the moments and we’ve come so far as a team. So, to give yourself every opportunity to just continue to have fun and enjoy it. That’s what we talked about going into overtime. We’re on home ice, it’s a nice crowd here, we’re playing hockey in the end of May and to get a chance to go play in overtime in playoff games, it’s pretty special and pretty big. So, go out and enjoy it and that’s what we’re trying to encourage our guys to do.

On getting pucks at or toward the net tonight:
Obviously, (Nedeljkovic) had our number in Game 3. You know sometimes to beat a good goalie like that, obviously goalie of the year, you just kind of throw stuff at the net. Luckily, we had a couple, (Carcone’s) first one bounced in, mine somehow found its way in and then Carc’s comes up big in overtime.

On the zone Michael Carcone was in tonight:
It’s big time. That’s the only words. It’s playoff hockey. This is why you put on the gear when you’re five, six-years-old, playing games like this, and showing up the way he did is obviously big for our club and it’s an honour to play alongside him.

On whether his goal was originally a pass to Carcone:
You want the truth? No, I saw Carc’s made a nice play off Engvall and I just saw him going there and he’s got a lot of speed so I just figured I might as well put it there, then it somehow found its way in.

On being a marked man:
Yah it’s frustrating at times. I’ve taken a couple big hits here and there, but like Keefer says, just gotta play through it. Obviously when you’re a marked man like that, it’s a compliment in a way and it’s a first time for me in this league. Watching guys like Johnny last year and Benny Smith and obviously (Mueller) being a marked man, they found a way to get it done so I want to do the same.

On his overtime goal:
I think I kind of blacked out there. Sometimes you don’t believe it but, it was definitely a good feeling.

On the zone he was in:
I just felt good, the puck was kind of following me out there. Games are going to go like that sometimes and definitely thankful it did and I could capitalize on those opportunities.

On Toronto’s speed tonight:
We played with speed. We played in their zone a lot more today and shut down their skill so I think we did a good job in doing that and that’s what made us successful.

On the message in the locker room after regulation:
Just to stay with it. We knew we outplayed them in third period. So, if we just went out and kind of played the same way that things would work out and they did.

On battling adversity:
Just sticking with it, we have a confident group. So, we knew if we went down we’d get right back into the game with just one shot and that’s what happened.

On if the ice has opened up with Jeremy Bracco as a marked man by Charlotte:
For sure, he’s an elite player and he deserves that, and obviously they’re going to look out for him so it kind of opens the ice for me and same thing with Mueller. So, you know I just have to take advantage of the opportunities I get.

The Toronto Marlies return to action today for Game Four of the Eastern Conference Finals, looking to bounce back after back-to-back losses to the Charlotte Checkers. The Marlies were 7-0 in the 2019 postseason heading into this series and extended their win streak to eight straight after taking game one in Charlotte. The Marlies now found themselves down 2-1 in best-of-seven series and will look to rebound on home ice tonight and tomorrow.

Special teams were an issue that the Marlies will look to correct in Game 4 as the power play converted on only 1 of 7 opportunities on Tuesday. Charlotte’s penalty kill did a good job of disrupting the Marlies’ rhythm, and Alex Nedeljkovic was solid between the pipes, which made life difficult for Toronto. Going up against the top penalty kill in the league, the Marlies struggled to generate good entries and chances on the man-advantage, and that’s something that they’ll look to correct here tonight.

“We’ll watch video and we’ll correct it,” said Marlies’ forward Chris Mueller following Tuesday’s game. “We have been a very good power play all playoffs, all regular season. You’ve got to give them a little credit, but we have to be better for our team.”

“We’ve got a very good hockey team, we’ve just got to rebound and get Game 4,” added Mueller. “We’ve got to create momentum, get pucks to the net. That’s a good hockey team, playoffs aren’t supposed to be easy, that’s what makes winning so gratifying and so special. So, just dig in, believe in ourselves and we’ll be fine.”

Puck drops at 7:00PM on Leafs Nation Network, TSN2 and AHLTV. Fans across Canada can also stream the game live in the Official Maple Leafs app. Follow us on Twitter and Instagram for behind-the-scenes action from Coca-Cola Coliseum.