Marlies Edge Checkers 2-1 in Game One 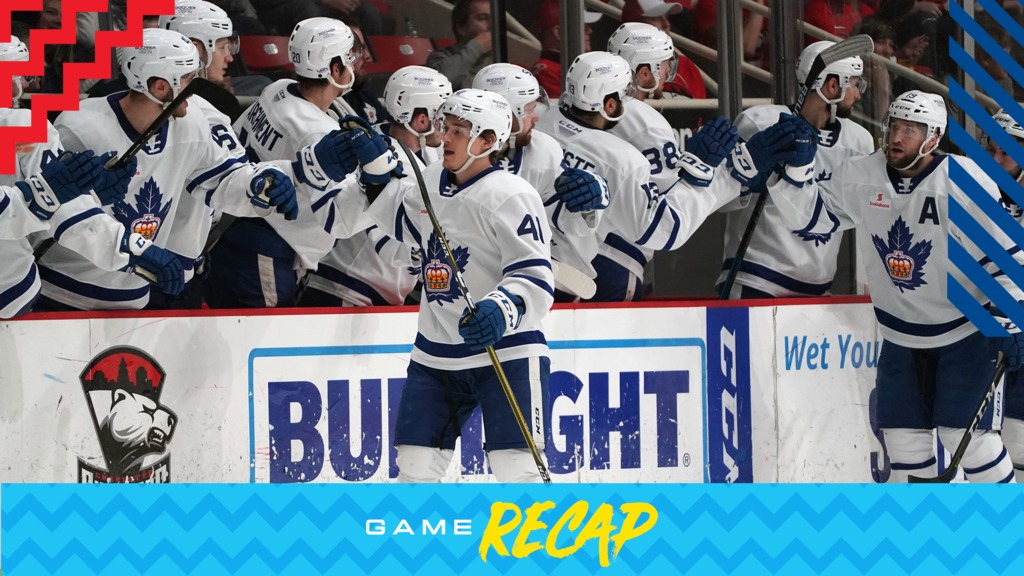 The Marlies kicked off round three of the Calder Cup Playoffs on Friday with a visit to Charlotte for game one of their Eastern Conference Final matchup.

As expected, the opening minutes saw high-intensity back-and-forth action as both teams looked to set the tone early on. In the early minutes, Calle Rosen came close to opening the scoring but rang his point shot off the post. Late in the frame, the Checkers came close on a frenzy in front of Kasimir Kaskisuo, and a shot came through, but Mac Hollowell had his stick on the crease and stopped the puck before firing it down the ice. Shots on goal in the opening frame were 13-7 in favour of the Checkers, while the score remained locked at 0-0 heading into the first intermission.

The Marlies continued to press in the second period and created some opportunities early in the frame. Three minutes into the period, Nedeljkovic gloved down a wrist shot from Pierre Engvall and minutes later stopped Trevor Moore on a breakaway. At 4:22, the Marlies would head to the power play as Charlotte’s Julien Gauthier sat for two on a tripping call. A minute into the penalty, the Checkers floated the puck over the boards and received a delay of game minor, giving the Marlies a two-man advantage for 1:03. Dmytro Timashov capitalized on the 5-on-3 at 5:50, wiring a wrist shot top shelf to open the scoring. Jeremy Bracco and Rasmus Sandin recorded the assists on the power play goal. At 12:07 of the second, the Checkers found the back of the net to even the score 1-1. The score remained locked 1-1 after 40 minutes of play.

57 seconds into the final frame, Mason Marchment tipped in a point shot from Timothy Liljegren to restore the Marlies one-goal lead. Toronto held onto their lead for the remainder of the frame and stood tall during a last-minute rush from the Checkers to record their eighth straight with and take a 1-0 lead in the best-of-seven series.

On the game going to plan after the first period:
I think so. Certainly, our third period was our best by far. I think that’s when we were really sharp with how we moved the puck, we had the puck a lot more. I like how we came out on the attack to take a hold of the game there in that third period rather than sit back and let them come at us. Being on the road against a very good team like this, that was a real positive sign and I thought we just defended really well.

On Adam Brooks’ line with Mason Marchment and Trevor Moore getting shifts at the beginning of the game:
We’re trying to get them going, trying to manipulate the matchups a little bit early in the game. Just trying to get a feel for how they’re going to control things with their last change and what have you. Once we got going in the game, I thought it was pretty spread out with our group. We know we’re going to need a lot from that line. Thought those guys were really good today, really skated well and then everybody else really fell in line from there.

On Mac Hollowell:
He’s defended really well since he’s been here. I thought he and really the rest of our defence early in the first period, I thought we showed some of our inexperience there, just kind of throwing the puck around a little bit, not relaxed with it. Maybe it’s the layoff and not playing but part of it too is when you prepare for as long as you do for such a good opponent you’ve been watching them for a week and you know how good they are and all of that. I thought it took some time for us to just settle down in the game and get playing.

On Mason Marchment:
I thought he made his presence felt right from the start of the game. He had a real big hit early to get himself and our team involved in the game. He was around the net and those are the kind of goals we’re going to have to score in this series. We’re going to have to get around the net and find ways for them to go in like that. If we’re going to get odd-man rushes, we’d like to see us execute a little better on the chances that we had in that second period. Mason played well, his line mates played well. That line is important for us and it will have to continue to be.

On whether the time off allowed the team to execute well:
I thought in terms of the things that we were expecting from them and having to prepare for, I thought they happened in the game and our guys were prepared for it. It’s not perfect because it’s difficult to do, there’s times when you’re tired and things happen in the game and you have some breakdowns and what have you. For the most part, I thought we did a really good job of making it hard on their skilled people. The game didn’t open up a lot for them today and that’s going to be important for us and when it did, they took advantage of it and they looked dangerous. It was a pretty solid and committed defensive effort from our group that is going to have to continue and we’ve just got to continue to find ways to execute.

On the game-winning goal and feed from Timothy Liljegren:
Great pass by Timmy. I was screaming for it and he put it right on the tee and it just slid in their nice and slow. It was a hell of a moment.

On being in front of the net for his third period goal:
You always want to be a natural scorer but if you can bang it in like that, I’ll bang them in. You do whatever you can to get the puck in the net.

On being a physical presence:
I just try to slow guys down as much as I can and try to get in their head. A lot of guys don’t like to get hit so that’s where I come in.

The Toronto Marlies are set to face the Charlotte Checkers in the Eastern Conference Finals of the 2019 Calder Cup Playoffs. Toronto starts the seven-game series on the road on Friday, returning home for Games 3, 4 and 5.

This season marks the eighth straight season and 11th trip to the postseason in the franchise’s 14-year history. The Toronto Marlies clinched a playoff berth on April 5 and finished the regular season seventh overall with 91 points and a record of 39-24-9-4. Following their 6-2 win over the Cleveland Monsters, the Marlies have won seven straight playoff games, sweeping both the North Division Semifinals and Finals. This is the sixth time Toronto has advanced to the Eastern Conference Finals in franchise history and the third time in four years.

The Charlotte Checkers head into the Eastern Conference Finals riding a six-game winning streak, outscoring their opponents by a 26-8 margin. They finished with the best record in the AHL during the regular season and are in the conference finals for the first time since 2011.

Although the Marlies will start this series on the road, playing away from the Coliseum hasn’t been a concern for Toronto. Special teams have been crucial for the blue and white throughout the postseason and will continue to be an important factor in the Conference Finals. The Marlies’ league-leading power play (39.1%) has registered nine goals, while their penalty kill (86.7%) has allowed only three goals against. These units have been especially lethal on the road, with the power play converting on 40% of their man-advantage opportunities, while the penalty kill has been nearly perfect on the road (92.3%), allowing only one goal against.

Toronto won three of four meetings against Charlotte during the regular season, edging them twice in overtime, and blanking them 5-0 in their most recent meeting.

Kasimir Kaskisuo has been lights out for the Marlies, posting seven consecutive wins, stopping 204 of 215 shots with a .949 Save Percentage and a 1.56 Goals Against Average. In Game 3 of the North Division Finals, he recorded his first playoff career shutout against Cleveland.

Jeremy Bracco registered four assists in Game 1 of the North Division Finals, tying the team record for most assists in one playoff game. Bracco picked up four points in two separate games this regular season. Bracco is tied for the league lead in points (2-8-10).

Rasmus Sandin leads all defencemen and rookies in assists (0-7-7) through seven games.

Andrew Poturalski leads the Checkers and the league in postseason scoring with 13 points (5 goals, 8 assists) in seven games.

Puck drops for game one at 7:00PM on Leafs Nation Network and AHLTV. Fans across Canada can also stream the game live in the Maple Leafs app. Follow us on Twitter and Instagram for behind-the-scenes action from Bojangles’ Coliseum.