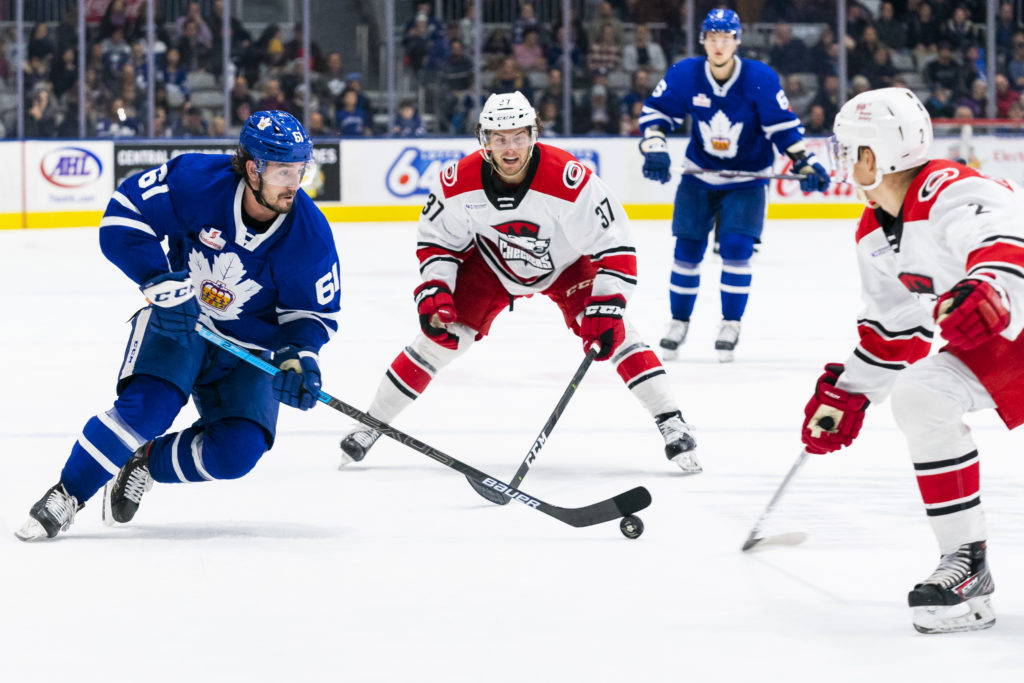 The Marlies dropped a tough one today, falling 4-3 to the visiting Charlotte Checkers.

Charlotte opened the scoring at 8:26 of the first period, capitalizing on a power play opportunity to take an early 1-01 lead. The Checkers struck again with only 40 seconds left in the first frame to jump ahead 2-0 heading into the first intermission.

Kasimir Kaskisuo entered the game to start the second period as the Marlies looked to switch things up and respond to the two goal deficit. Unfortunately the Checkers struck again at the half way mark of the frame, extending their lead to 3-0. At 12:23 the Marlies were granted an opportunity on the power play as Charlotte’s Terry Broadhurst was called for goaltender interference. Late in the power play Adam Brooks dished the puck to Timothy Liljegren at the point and after quickly getting it under control, Liljegren wired a shot bar down to get the Marlies on the board. Jeremy Bracco recorded the extra assist on the power play goal. The Marlies then found themselves down by three again when the Checkers added a shorthanded goal in the final minutes of the frame. The Marlies were on the board but trailed 4-1 heading into the third period.

The Marlies came alive in an electric third period, peppering Alex Nedeljkovic with 17 shots as they worked to chip away at the deficit. Hudson Elynuik cut the Checkers’ lead in half at 5:52 of the third period after the puck came off the back boards, catching Nedeljkovic out of position. Ben Harpur and Liljgren assisted on Elynuik’s third of the season. At 9:08, Garrett Wilson found the puck loose at the side of the Checkers’ goal, making a diving play to bring the Marlies within one. Despite some quality chances that brought the home crowd to their feet, the Marlies couldn’t complete the comeback.

Toronto will be back home on Tuesday to host the Belleville Senators for a 7:00 PM start at Coca-Cola Coliseum.

On Toronto’s third period:
Yeah, we saw the ceiling of what our team was. We controlled the period. There wasn’t a lot of opportunity or time or space for them to make plays. A lot of good signs. Not the start we want, got better as the game went on. We started to find that the third period was what we want to see consistently. This team is still fighting to find that consistent play and we had to have known and we talked about the response they were going to have after yesterday and the first period was a little lethargic. But some games in the past after getting down the team had a hard time coming back and generating. Today is a good sign of them moving in the right direction and they competed, they found their way back into the game and they gave themselves a chance to win.

On Kasimir Kaskisuo replacing Joseph Woll:
Just didn’t really like how the couple goals went in. Kaskisuo gave us a great game yesterday. We’re trying to build some momentum for the team and wanted to put him in there to stabilize things for our group.

On Timothy Liljegren (1 goal, 1 assist):
He might have been our best player on the ice tonight. He generates a lot. His skating and his ability to get pucks back transitions the game. He’s an elite player who’s starting to find his way and he has been for some time but tonight he definitely showcased that.

A few days off for the AHL All-Star break proved to be worth while for the Marlies, who found their way back to the win column last night in convincing fashion. Toronto defeated the visiting Charlotte Checkers 6-2 last night and will look to even up the four-game regular season series in today’s rematch.

The Marlies found themselves behind early on but quickly responded and shifted the momentum with the support of the home crowd behind them. Nic Petan put the Marlies on the board and added the primary assist on Hollowell’s second period goal. He has points (2-3-5) in three consecutive games. Petan has 26 points (10 goals, 16 assists) in 18 games this season. Scott Pooley earned first star honours following a two-goal performance in last night’s contest. It was his second two-goal game of the season. Pooley has six goals in 16 games this season.

Greg Moore was happy with the team’s performance last night, especially the response after going down by a goal. “For sure the response after going down by a goal. The break was good to us. You could tell the energy and the excitement for the players to be back on the ice. Got a little mental refresher and really, a lot of how we played tonight I thought we played like in Cleveland as well, we just didn’t get the results. In our staff’s mind, we put together three good games. Hopefully we can continue to find that consistency.”

Consistency will be key for the Marlies down the stretch as they work to pull themselves out of a recent slump. Last night’s win moved Toronto back into playoff contention, but stringing together some wins will be important for security in a tight North Division.

The Next Gen is taking over Coca-Cola Coliseum again today for another Marlies Graduate bobblehead giveaway. The first 3000 fans will receive a limited-edition Zach Hyman bobblehead. To learn more about Next Gen, click here.