Marlies Get Back in the Win Column 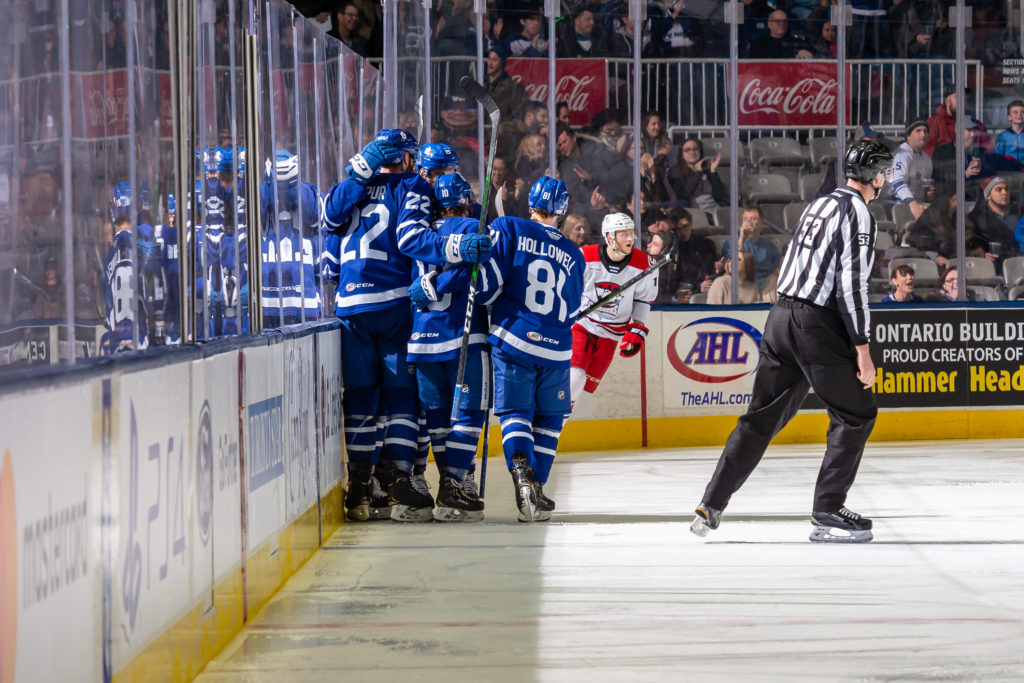 The Marlies battled their way back to the win column tonight, picking up two points in a 6-2 victory over the visiting Charlotte Checkers.

The visitors struck first at 6:16 of the opening frame, putting the Marlies on notice early on in the game. They were quick to shake off the early deficit and responded at 7:56 with a goal from Nic Petan. Petan picked up the loose puck in the slot and walked in before firing a shot past Anton Forsberg. Petan’s 10th of the season was unassisted. Charlotte held a 12-11 edge in shots in the opening 20 minutes and the score was knotted 1-1 heading into the first intermission.

The Marlies came out firing on all cylinders in the second period with three goals in a minute and a half to take a commanding 4-1 lead. Mac Hollowell kickstarted the second period scoring at 1:19 with a beauty backhand for his first career AHL goal. Nic Petan and Ben Harpur registered the assists. At 2:30, Scott Pooley wired a shot from the faceoff circle, beating Forsberg blocker side. Pooley’s fifth of the season was assisted by Teemu Kivihalme and Timothy Liljegren. The goal chased Anton Forsberg from the goal as Alex Nedeljkovic entered the game to relieve him. 19 seconds later, Pooley picked off a pass as the Checkers were attempting to clear the zone and jumped in on a breakaway and made no mistake beating Nedeljkovic. Later in the frame the Checkers capitalized on a power play opportunity, cutting the deficit to 4-2. At 18:05, the Marlies answered back with a power play goal of their own as Tanner MacMaster walked in and lifted a backhand over the blocker of Nedeljkovic to restore the Marlies’ three-goal lead heading into the second intermission.

At the five minute mark of the third period, Egor Korshkov welcomed himself back to the lineup, extending Toronto’s lead to 6-2. Korshkov shook off a Checkers’ defenceman behind the net before scoring a wraparound goal to give the Marlies a comfy lead. The Marlies maintained their lead and held the Checkers to only eight shots on goal in the final frame. Kasimir Kaskisuo turned away 31 shots on the night to pick up his 12th win of the season in the 6-2 final.

The Marlies and Checkers will meet again for a rematch tomorrow at Coca-Cola Coliseum. Puck drops at 4:00 PM.

On the team being down a goal and pushing back for the win:
For sure the response after going down by a goal. The break was good to us. You could tell the energy and the excitement for the players to be back on the ice. Got a little mental refresher and really, a lot of how we played tonight I thought we played like in Cleveland as well, we just didn’t get the results. In our staff’s mind, we put together three good games. Hopefully we can continue to find that consistency.

On Egor Korshkov (1 goal):
Big size, a lot of skill. He’s an interesting, fun player to watch. He just sheds people off as they approach him. He’s great protecting the puck and possessing. Nice little play he made down low for his goal. He brings an element to our team and some depth.

On Mac Hollowell (first career AHL goal):
He’s a very skilled player. We’ve seen a lot of it. It hasn’t resulted in a goal such as that. He’s such a good skater, he positions himself offensively and defensively really well through the middle of the rink, uses his stick to his advantage, which he’ll have to with a little bit undersized defenceman but he makes up for it with his ability to skate and position himself off of defenders.

On tonight’s win against Charlotte:
I think we just did a lot of the little details right that were kind of hurting us. It was nice to get home after the long road trip and after the break and be able to get back into our routine and I think that helped a lot. We were happy to put a full 60 on the ice and obviously we got the result we wanted.

On what the coaching staff’s message was going into tonight’s game:
Just keep it simple really. Coming back from break, hands might be a little rusty, guys get their legs back under them and stuff. But like I said in games prior, we liked the process, we liked the way we played and we just didn’t get the results we wanted, so we wanted to put a full 60 on the ice and we knew we’d get the result and I think we showed that tonight.

On whether confidence or experience has led to increased scoring:
Yeah, I think obviously confidence is huge for any player so to get the first one and be able to play a little more loose and have the confidence to shoot the puck. There’s lucky bounces and I was a lucky recipient, just put it on net and it went in so, there’s no secret to it or anything but I’ll take it.

The Marlies return to Coca-Cola Coliseum tonight for their first home since January 5th and first game game back from the AHL All-Star break.

Home ice will be a welcome advantage tonight as the Marlies look to wipe the slate clean and start fresh following a tough stretch of road games. Toronto picked up one win on their annual Boat Show road trip, a 6-1 victory over the San Antonio Rampage, as well as two additional points from a shootout loss and overtime loss in Charlotte and Cleveland respectively. The Marlies hope to build on their 13-6 record at home and string together some points as they kick off a three-game home stand here tonight. Two points separate Toronto (47) from Laval (49), who currently hold the fourth and final playoff position in the North Division. Belleville leads the way with 58 points while Rochester and Utica claim the second and third positions with 54 points. The team knows importany points are on the line down this stretch as teams begin  jockeying for playoff positioning. “We know we’re a good hockey team and now we’re all well rested, it’s time to make that push,” said Matt Read following morning skate. “This is the best time of the year when every team is bringing out their best trying to make the playoffs. There’s no excuses from here on out.”

After defeating the Marlies in back-t0-back games two weeks ago, the Checkers have since dropped their most recent two contests. The Checkers are also battling to get back into a playoff position as they currently sit one point back from fourth place in the Atlantic Division.

Puck drops at 7:00 PM tonight on Leafs Nation Network and will be streamed live in the Maple Leafs App. Tonight’s game will also be available on Facebook Watch as part of the AHL’s free Facebook Game of the Week. Click here to watch on Facebook.