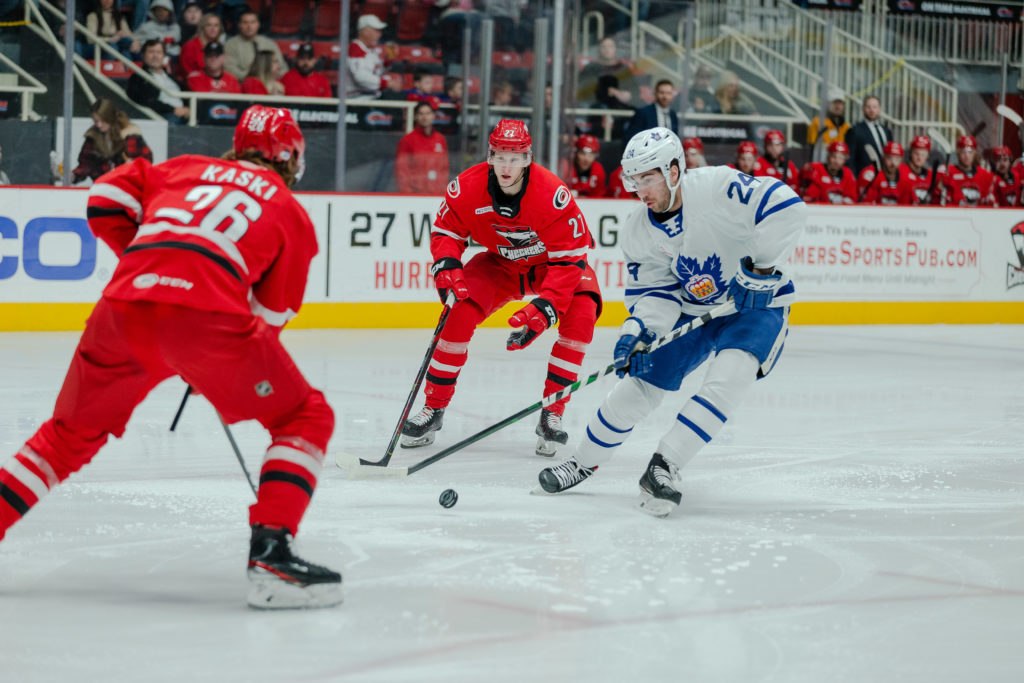 It was a tough afternoon in Charlotte for the Marlies who suffered their third straight loss, falling 7-3 to the Checkers.

The Checkers took the lead in the first period, capitalizing on a power play to open the scoring. The home team outshot the Marlies 9-5 in the opening 20 minutes and held onto their 1-0 lead heading into the first intermission.

The Checkers kept their foot on the gas in the second period, extending their lead to 2-0 just 19 seconds into the middle frame. They added two more goals in the first half of the period to give themselves a 4-0 cushion. Visibly deflated, the Marlies worked to try and turn things around and cut the deficit. Just past the midway point of the frame, Jordan Schmaltz tipped in a shot from Jeremy Bracco to get the Marlies on the board. A minute later, Hudson Elynuik tipped one in from Joseph Duszak to cut the Checkers’ lead in half. At 15:05, Jeremy Bracco, Mason Marchment and Kenny Agostino connected on a power play with a tic tac toe goal to make it 4-3. With Agostino’s 20th of the season the Marlies seemed to be back in this one. Unfortunately that wouldn’t last long. Late in the frame, the Checkers extended the gap again with a power play goal to make it 5-3 after two periods of play.

Charlotte added two unanswered goals in the third period, stunning the Marlies in a 7-3 final.

Toronto will have a few practice days at home this week before heading out to Cleveland on Thursday to close out their Boat Show Road Trip against the Monsters this weekend.

On today’s game:
Loss for words right now. I think pretty frustrated, I think the whole group’s frustrated. We all haven’t been good enough. It’s going to take a group effort to climb our way out of this. Can we? Yes. Will we? Yes. Today’s another frustrating day. We’re going to find a way to right the ship.

On where he sees breakdowns in Toronto’s play:
D-zone, we definitely have to be a little bit tighter. We’re still allowing too much inside and getting to our goaltender. We’ve got to be able to close out on the D-zone when it’s a fifty-fifty puck and win our battles. There’s just an intensity in the game of hockey it needs to have and for the team to have throughout the entire bench. We had it for the second period today. Again, first period was not what we wanted in terms of talking about it and our slow start yesterday but just a little bit more heart, a little bit more possession, a little bit more our style and doing the things that we preach here and we’re having a hard time finding that consistency.

The Marlies wrap up their weekend trip to Charlotte, N.C. today looking to bounce back from a 4-3 shootout loss to the Checkers last night.

With last night’s win, the Checkers extended their win streak to four straight and remain the hottest team in the league right now with only one loss in their past 10 outings.

Toronto was 3-for-5 on the penalty kill and 0-for-5 on the power play last night. When asked about special teams following last night’s game, head coach Greg Moore commented, “I thought early on, the first couple of power plays, we just had a hard time getting through the middle of the rink. They did a good job getting up ice, disrupting our flow. Then we settled, started getting some entries and the in-zone, they did a good job of keeping us perimeter. We’ve got to find a way to get interior but you know, it was a little bit of a special teams game today. I was really happy five-on-five with how we executed and the looks that we got, really liked our o-zone and the movement that we got inside on the goalie a few times.”

Mason Marchment led the Marlies with seven shots on goal last night and provided all three of the Marlies goals, earning his first professional career hat trick. The Marlies are 10-6-0-1 against Central Division opponents and are 0-0-0-1 against the Charlotte Checkers.

Following today’s game the Marlies will return home for some practice days before heading to Cleveland next weekend to close out their annual Toronto Boat Show Road Trip.