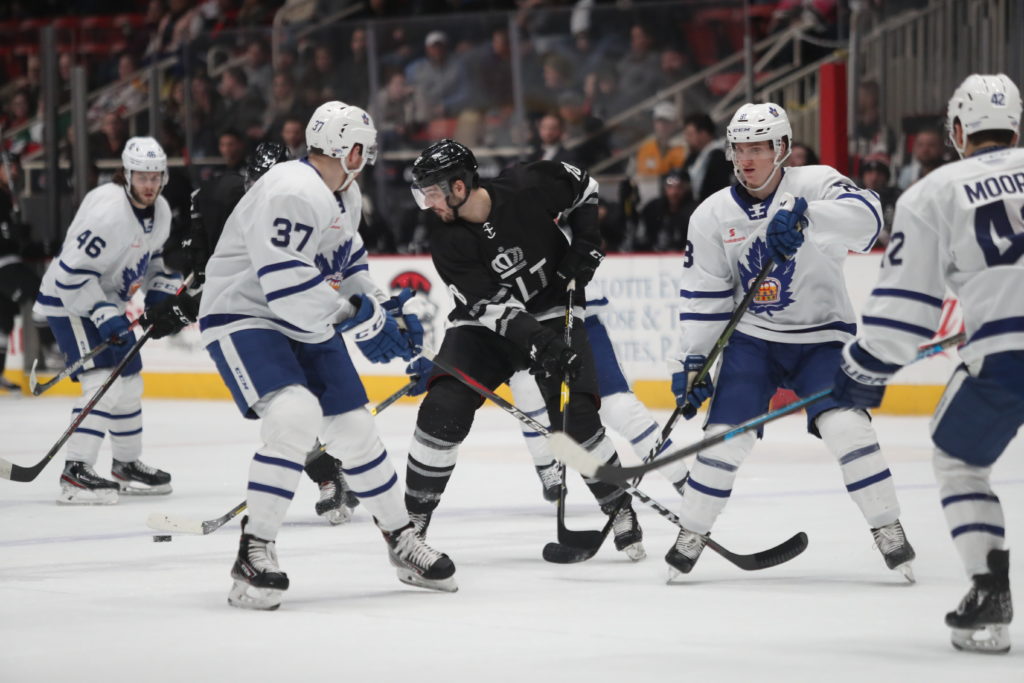 The Marlies knew they’d have an uphill battle tonight against a tough Charlotte team, and that proved to be the case in a back and battle that needed to be settled in a shootout.

The Checkers responded in the second period with a pair of power play goals near the halfway mark of the frame to jump ahead 2-1.

Marchment evened things up at 3:22 of the third period, one-timing a pass from Trevor Moore for his second of the night. Teemu Kivihalme picked up the extra assist on the goal. Minutes later, Marchment completed his first professional career hat trick, wiring a shot top shelf over the glove hand of Anton Forsberg to put the Marlies ahead 3-2. The Checkers brought the pressure late in the frame and it paid off as Jake Bean evened the score 3-3 with 27 seconds to go in the frame to force things into extra time.

3-on-3 overtime did not yield a winner so a shootout would be necessary to settle this one. Charlotte’s Steven Lorentz scored the lone-goal in the shootout to seal a 4-3 win for the home team.

The Marlies will have a chance to rebound tomorrow in a rematch against the Checkers. Puck drops at 1:00 PM EST.

On the team’s response five-on-five:
I thought really well. We had a good process during the game. The bench stayed with it, there was some adversity through the first and second periods. We found our game in the third period, we really showed how we can play.

On special teams:
I thought early on, the first couple of power plays, we just had a hard time getting through the middle of the rink. They did a good job getting up ice, disrupting our flow. Then we settled, started getting some entries and the in-zone, they did a good job of keeping us perimeter. We’ve got to find a way to get interior but you know, it was a little bit of a special teams game today. I was really happy five-on-five with how we executed and the looks that we got, really liked our o-zone and the movement that we got inside on the goalie a few times. We really gave ourselves a chance to win tonight.

On Kasimir Kaskisuo (34 saves):
He had a great game, gave us a chance to win this hockey game. He looked really solid, really calm, exactly what we need.

On Mason Marchment (3 goals):
He brought a lot of good energy, he loves the game, even on the bench, he’s so positive and brings a good energy. His play tonight was a whole other level that I hadn’t seen out of him and it’s really good to have guys that go up and then come back down to give them that confidence at this level and he’s showing that he can play really well at this level.

On Trevor Moore (1 assist):
Shows the character of the person that he is. I’m sure he’s been working really hard to get back. It’s the times when no one’s watching and you’re by yourself on the ice and going through your protocol to return to play, he was successful in today’s game because he’s such a hard worker and disciplined in that area.

The Toronto Marlies’ annual Toronto Boat Show Road Trip rolls on through Charlotte N.C. for a pair of games against the defending Calder Cup Champions.

The Marlies will have their work cut out for them this weekend as they enter the back half of this eight-game road swing with a back-to-back against the Checkers. It will be a rematch of the 2019 Eastern Conference Finals tonight as these two teams meet for the first time since the the Checkers edged the Marlies in double overtime in game six of the series.

The Checkers are finding continued success this season and are red hot coming into tonight’s game, riding the high of a three-game win streak with only one loss in their past 10 contests. The Marlies have struggled to find consistency lately and will be looking to rebound following a 4-3 loss to San Antonio on Thursday. “When we’re successful, we’re consistent,” said Marlies head coach Greg Moore following today’s morning skate. “We’re having a hard time as a group finding that. We have to be pros and find a way to prepare ourselves, have the right mindset and not allow transitions of the game to alter what our next rep is like.”

The Marlies will welcome back Trevor Moore, who joins the team for a conditioning loan. Other players to watch tonight include: