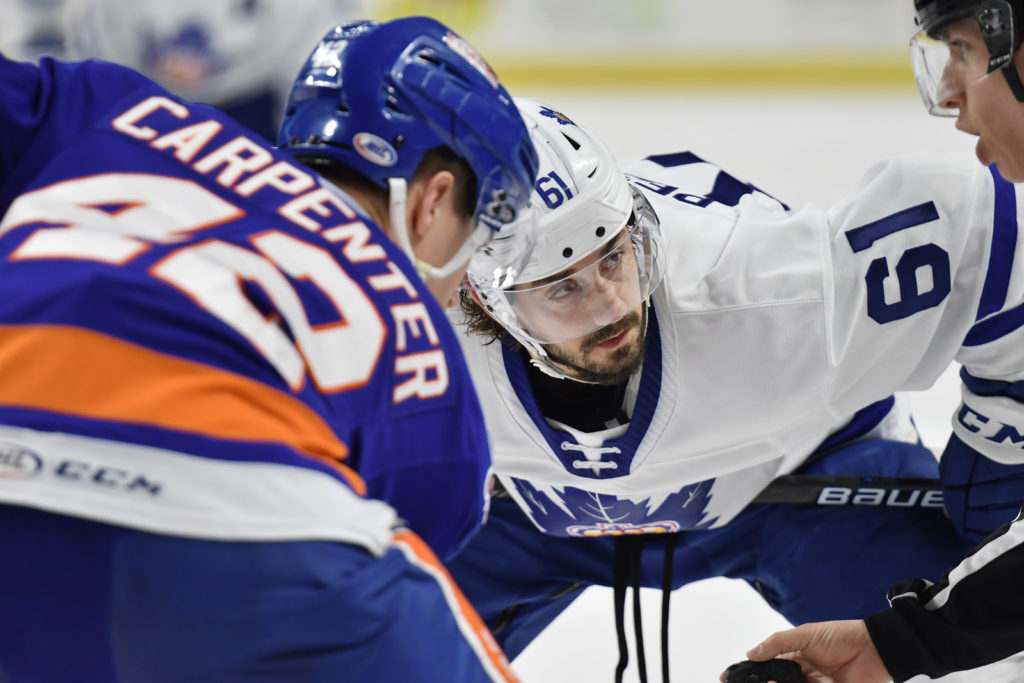 The Marlies opened up a three-game road trip with a tough 4-1 loss tonight in Bridgeport.

Toronto out chanced Bridgeport in the opening 20 minutes, testing Christopher Gibson with 13 shots, but found themselves down by one after Bridgeport’s Travis St. Dennis opened the scoring at 16:37 of the first period.

The home team extended their lead to 3-0 with a pair of unanswered goals in the second period, including a shorthanded marker from Kieffer Bellows.

The Marlies finally solved Gibson at 3:37 of the third period when Garrett Wilson buried a rebound to get Toronto on the board. Teemu Kivihalme picked up the assist on Wilson’s 10th of the season. The Marlies continued to press in the final frame, but couldn’t battle their way back despite peppering Gibson with 25 shots in the period. The Sound Tigers added an empty net goal late in the frame to seal a 4-1 win.

The Marlies will travel to Hershey on Friday and close out their road trip on Saturday in Lehigh Valley.

On whether he was satisfied with the shot selection (45 shots):
No, I don’t think our staff is really concerned at all as to what the shots were. Our team just finds a way to want an easy game. The inconsistency we’ve talked about for a very long time now. They wanted an easy game in the first period, couldn’t find it in the second and it’s not a lack of executing our game plan, they just don’t want to work. They worked hard in the third period because they wanted to make a push to come back but hockey karma, they don’t want to play the right way in the first and that’s what happens.

On what changes can be made in-game by the coaching staff:
Change up lines. As a staff, we’re so frustrated. We’ve gone up and down the ladder of different things that we can do try to do to motivate them to want to work hard consistently. At the end of the day, they’ve got to want to play hard for each other and it doesn’t seem like they want to do that right now.

The Marlies are in Bridgeport, Connecticut tonight to kick off a three-game road trip.

With five weeks remaining in the regular season, the Marlies will be looking to string together some wins on the road this week, in hopes of starting their ascent back into playoff contention. The Marlies have fallen to seventh place in the North Division, and the gap has widened as the Binghamton Devils continue to be red hot. Seven points now separate the Marlies (63 points) from the fourth place Devils (70 points), with the Syracuse Crunch (67 points) and Laval Rocket (66 points) and  still very much in the mix. Points are crucial now as Marlies continue to fight for their postseason lives in a tight division race.

The Sound Tigers have had a tough season so far and currently sit in eighth place in the Atlantic Division and last place in the Eastern Conference. They have two wins in their previous five contests, both over the Lehigh Valley Phantoms, who the Marlies are set to visit on Saturday. This is the first of two meetings between the Marlies and Sound Tigers this season; they’ll meet again in Toronto for the Marlies final regular season game on April 11.