Marlies Fall to Senators in OT 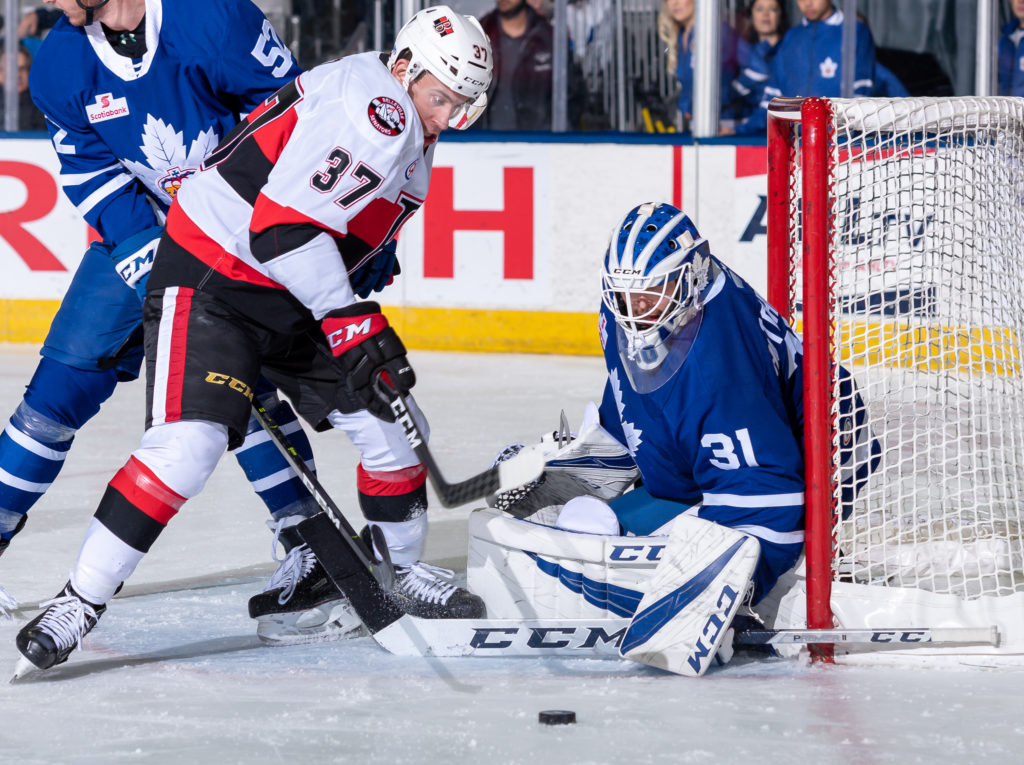 The Marlies and Senators met for the eighth time this season Tuesday night for a weekday clash at Coca-Cola Coliseum. The Senators came out firing as they looked to snap a three-game losing streak. The quick jump paid off as they opened the scoring just 1:18 into the first period. Erik Burgdoerfer notched the opening goal from Nick Paul and Drake Batherson. Jeremy Bracco got the Marlies on the board at 7:36, finishing off a beautiful pass from Chris Mueller to even the score 1-1. Calle Rosen picked up the secondary assist on the goal which was his 30th of the season. The Marlies took the lead at 12:58 when Trevor Moore found Sam Gagner in the slot and he made no mistake sending a wrist shot over the shoulder of Marcus Hogberg. The Senators were quick to respond as Jordan Murray beat Michael Hutchinson to even things up 2-2. Shots on goal in the opening frame were 12-7 in favour of the Marlies.

The second period mirrored the first with goals going back-and-forth as each team looked to establish a lead. The Marlies took their second lead of the night at 10:26 when Jeremy Bracco sent Chris Mueller on a breakaway where he beat Hogberg to put the Marlies up 3-2. At 13:58 the Senators tied things back up with a goal from Nick Paul. Late in the frame Aaron Luchuk restored the Senators’ lead to make it 4-3. The Marlies responded 30 seconds later as Michael Carcone one-timed a pass from Colin Greening past Hogberg to knot the score 4-4.

The back and forth trend carried into the third period as each team added a pair of goals in the final frame. The Senators added two goal, 20 seconds apart early in the third to jump up to a 6-4 lead. Not to be outdone, the Marlies responded with goals from Andreas Borgman and Frank Corrado to even the score and send things into overtime. As always, 3-on-3 sudden death overtime saw intense end to end action as both teams exchanged chances. The Senators capitalized in the final minute of extra time as Sam Gagner got tripped up in the offensive zone allowing the Senators to jump out on an odd-man rush and notch the game winner.

The Marlies are back in action on Saturday to host the Springfield Thunderbirds for a 4:00 PM start at Coca-Cola Coliseum.

On what was said following tonight’s loss:
I don’t say anything to them after a game like this but we’ll certainly talk tomorrow. It’s a major step backwards again for our team. I thought defensively we just played with no purpose at all throughout the game. You know we’re a high flying, free-wheeling offensively so we found a way to score a bunch which is good but we should win 100 per cent of the games that we score four goals, let alone six. So, we’ve got to be a whole lot better. We go through last weekend and don’t give up a goal through 120 minutes of hockey but today, played with no structure at all. It’s just showing that we’re not where we need to be as a team. So, we have another opportunity to reflect and practice tomorrow. I think you get embarrassed today. You get that top line of theirs that did whatever they wanted out there tonight. So, I think that’s pretty embarrassing for our team and it’s been that way most of the season. I shouldn’t have to say or at least I don’t think I’ll have to say too much. Our guys will come to the rink ready to work tomorrow.

On Martin Marincin’s play:
I think in a lot of ways he stood out in a positive way like he maybe he didn’t belong here in that sense but it’s nice to have him, for sure. You’d like to think we would have a better defensive display with him back there. But the thing I liked about it is he came into play with a lot of confidence offensively. You’re not really afforded those opportunities in the NHL game but it just shows his confidence that he has and the ability that he has at this level so it’s good to see him having fun out there.

On updates on Timothy Liljegren and Rasmus Sandin:
I think we’ll see Sandin (this weekend), I don’t think we’ll see Liljegren. We’re going to take a little more time with him. I wouldn’t rule it out but it’s not something that we’re scheduling at this point in terms of where he’s at. But he’s going to get a couple more practices and we’ll see where he goes. But Sandin at this stage is really close. So, we’re hopeful that he’ll be in, be ready. I think that’ll be the case.

The Toronto Marlies (24-16-3-3) and Belleville Senators (20-23-2-3) meet tonight for their eighth meeting of the season and third meeting at Coca-Cola Coliseum.

Coming into tonight’s game, the Senators will be looking to get back in the win column after dropping six of their previous 10 contests including consecutive shootout losses in their last three. On the flip side the Marlies seem to have hit their stride, picking up wins in their previous three games. They’ll be looking to even up the Battle of Ontario series and make it four-straight tonight. The Marlies currently sit third (54 points) in a tight North Division playoff race, while the Senators are eighth with 45 points.

Players to watch: With four points in his last three games, Chris Mueller continues to lead the Marlies and sits fourth amongst AHL skaters with 45 points. After recording two assists on Saturday, Calle Rosen now has 29 assists on the season which tops all AHL defencemen. The Marlies will have a couple new faces in the lineup tonight with the addition of defenceman Martin Marincin, loaned from the Maple Leafs, and forward Tanner MacMaster, acquired via trade with Utica in exchange for Stefan LeBlanc.