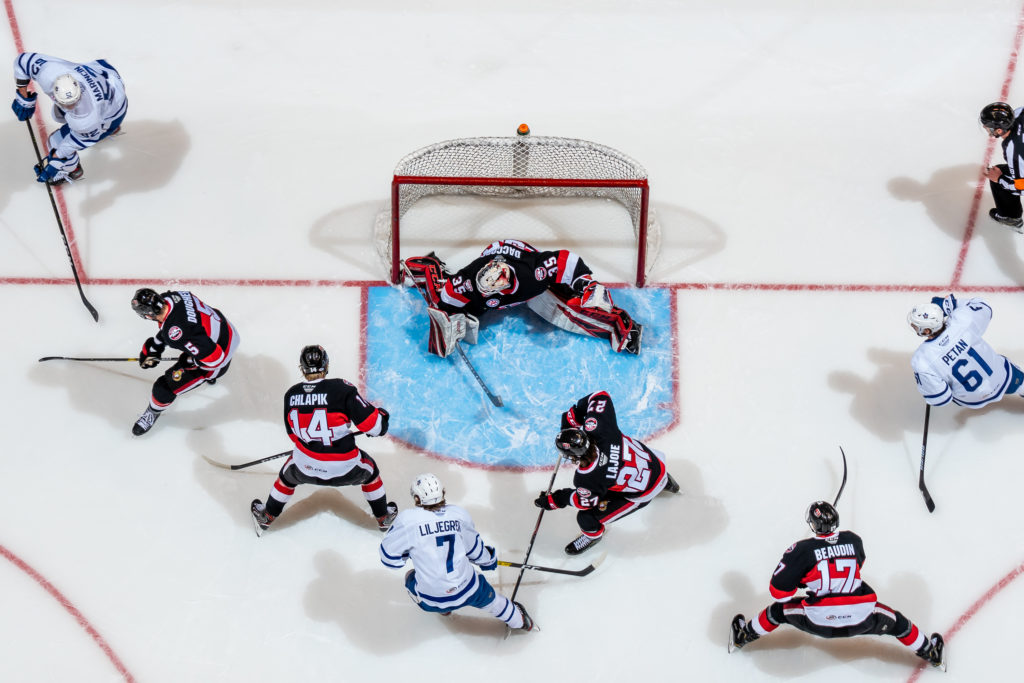 The Marlies didn’t get the start they were looking for today, finding themselves down by one just 1:17 into the first period. Belleville’s Josh Norris notched the opening goal to give the visitors an early lead. At 7:23, leading goal scorer Kenny Agostino shifted the momentum back in the Marlies favour, finishing off a seam pass from Jeremy Bracco to even the score 1-1.

Toronto had an early opportunity on the power play in the second period as Belleville’s Jordan Murray was booked for hooking. Adam Brooks capitalized on the man-advantage to gave the Marlies a 2-1 lead after jamming the puck in behind Joey Daccord from the side of the goal. Jeremy Bracco and Nic Petan assisted on the goal. The Senators added two goals late in the frame, including a shorthanded marker to jump ahead 3-2.

The Marlies peppered Daccord with 13 shots on goal in the final frame but couldn’t find the back of the net to force extra time. The Marlies are now 8-4-2-1 against North Division opponents and are 3-2-0-0 against the Belleville Senators. Toronto has outscored Belleville 21-15.

The Marlies will now head to Laval for a back-to-back before returning home for New Years Eve to host the Cleveland Monsters.

On today’s game:
The first period, I thought we had a tough start. We let some things in behind us. But once the second period got going, I thought we controlled the game, we had things going our way. Their goaltender had a great game, just couldn’t find the back of the net. But in terms of process and not looking at results, I thought the second and third periods were a step in the right direction for the team.

On Joseph Woll’s performance (24/27):
Yeah, he came up huge. He gave us a chance to stay in the game and a change to win. He’s a young goaltender with a bright future and we look forward to giving him more reps and seeing how he grows.

On what the team will work on practice:
Well, not a lot of practice this week. We’ve got two games coming up in the next two days so we’ll teach via video. We’ll get back to some things tomorrow and go from there.

The Toronto Marlies and Belleville Senators are set to square off today in the Marlies’ annual Boxing Day Classic at Scotiabank Arena. This is the fifth meeting between these North Division rivals, and third this month.

The Marlies cracked a three-game losing skid and took a 3-1 lead in the 12-game regular season series against the Senators on Saturday following a convincing 7-3 win in Belleville. Belleville had a 31-23 edge in shots in all situations in that game, but the Marlies made their opportunities count and were a perfect on the penalty kill (7-for-7). Some new season records were set on Saturday as Pontus Aberg’s opening goal on Saturday was the fastest (26 seconds) scored to open a game by Toronto this season, and Timothy Liljegren and Nic Petan’s second period power play goals were the two fastest consecutive goals (25 second) scored this season. Pontus Aberg leads the Marlies with 26 points (11 goals, 15 assists) through 23 games while Kenny Agostino (2-1-3) and Adam Brooks each have points (1-2-3) in three consecutive games. After having a few days off for the holidays, the Marlies will be looking to pick up where they left off and bring that same energy from Saturday into today’s game.

Despite Saturday’s loss, the Senators are still currently one of the hottest teams in the league with seven wins in their past 10 games. Drake Batherson leads the way for the Senators and sits atop the league leaders with 37 points (12 goals, 25 assists) through 28 games. He continues to be lethal against the Marlies with a goal in each of their last two meetings.

Puck drops at 3:00 PM on Leafs Nation Network. Fans across Canada can also stream the game live in the Official Maple Leafs App.