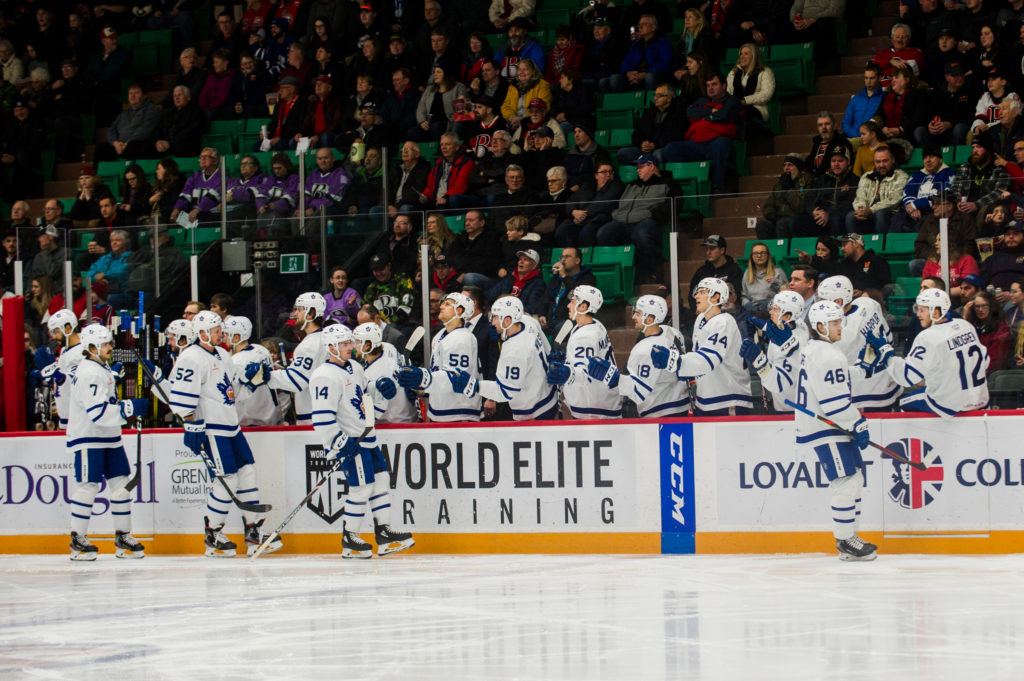 The Marlies snapped a three-game losing skid Saturday night in a convincing 7-3 win over the Belleville Senators.

Pontus Aberg scored 26 seconds into the first period, giving the Marlies an early 1-0 lead with his 11th goal of the season. Nic Petan and Timothy Liljegren recoreded the assists on the opening goal. The Senators responded with goals from Josh Norris and leading scorer, Drake Batherson, to jump ahead 2-1. The Marlies got into some penalty trouble throughout the frame but were 3/3 on the penalty kill in the opening 20 minutes. They trailed the Senators by one heading into the first intermission.

Filip Chlapik extended the Senators’ lead to 3-1 with a goal at 2:31 of the second period. At 7:28, Garrett Wilson and Darren Archibald converted on a give and go to bring the Marlies back within one. The goal kick started a scoring frenzy as the Marlies potted five more unanswered goals. At 12:52 of the second period, Belleville’s Chlapik and Jack Dougherty took simultaneous penalties, giving the Marlies a two-man advantage. Toronto capitalized early into the power play as Timothy Liljegren buried a one-timer to even the score 3-3. Shortly after, Jeremy Bracco sent Nic Petan in alone and he made no mistake restoring the Marlies’ lead with his third of the season. The three-goal period put the Marlies ahead 4-3 heading into the final frame.

The Marlies kept their foot on the gas in the third period, starting with a top-shelf goal from Kenny Agostino 1:52 into the frame. Kalle Kossila assisted on the goal, picking up his first point in his first game this season. At 6:25, Hudson Elynuik extended the Marlies’ lead to 6-3, burying a cross-crease pass from Petan. At 16:19, Mason Marchment was awarded a penalty shot and he beat Joey Daccord to make it 7-3. The Marlies are now 3-1 against the Senators and 8-3-2-1 against North Division opponents.

The team will have a few days off for the holidays before returning to action on December 26th for the annual Boxing Day Classic at Scotiabank Arena.

On Toronto’s comeback after being down after the first period:
First period was tough, we got into some penalty trouble. I thought the second period, we responded really well. We kind of got through it, Woll did a good job and our penalty kill did a great job getting us through those tough 20 minutes and then we had a couple of tough shifts in the d-zone. Gaudet’s line did a really good job of giving us some hard minutes and getting the game kind of going in the right direction. Then we come up with a goal in the shift after that. I thought we got better throughout the second, throughout the third, guys really kind of buckled down. I know it’s the one game on the weekend before the break but I thought their execution and their ability to find their game after the first was really good.

On establishing flow with the number of special team opportunities:
It’s for sure tough and the players depending on where they are in special teams, they’re having a difficult go getting into a flow of the game. The third period was a little better in terms of that but it was tough. I’m really proud of how the players kind of managed that and got through it.

On Timothy Liljegren’s play (1 goal, 2 assists):
Really good. He distributes the puck well, he exits the puck well. He gets our game transitioning in a real positive sense. He makes plays to the middle of the rink, he gets pucks to the right guys and collects some points.

On Kossila’s return to play following injury:
Thought he was really impressive for his first game back for not having played so long. Some of the real simple little plays out of our d-zone through the middle of the rink, real subtle but he makes them look real easy which is what’s special about his talent.

After a week-long hiatus, the Marlies are back in action today for one last battle before the holiday break.

The Battle of Ontario heads back to Belleville as the Marlies and Senators get set to face off in their fourth meeting this season. The Marlies currently hold a 2-1 lead in the 12-game regular season series, after picking up wins in their first two games against their North Division rivals. Most recently, the Senators captured their first win of the series, handing the Marlies their first loss of the season at Coca-Cola Coliseum in a 4-1 final last weekend. After a week of practice and development, and a chance to get familiar with newly appointed head coach, Greg Moore, the Marlies will be looking to crack a three-game losing skid and get back in the win column before heading home for the holidays.

The Senators are coming off a 4-3 loss to Utica, but have been red hot with eight wins in their previous 10 contests. They’ve rapidly climbed the league standings and currently sit in fifth place in the North Division and seventh overall, with Drake Batherson leading the way. Batherson currently leads the league in scoring with 34 points (11 goals, 23 assists).

Puck drops at 7:00 PM on AHLTV. Fans can also follow along on Twitter (@TorontoMarlies) for live game updates from CAA Arena.