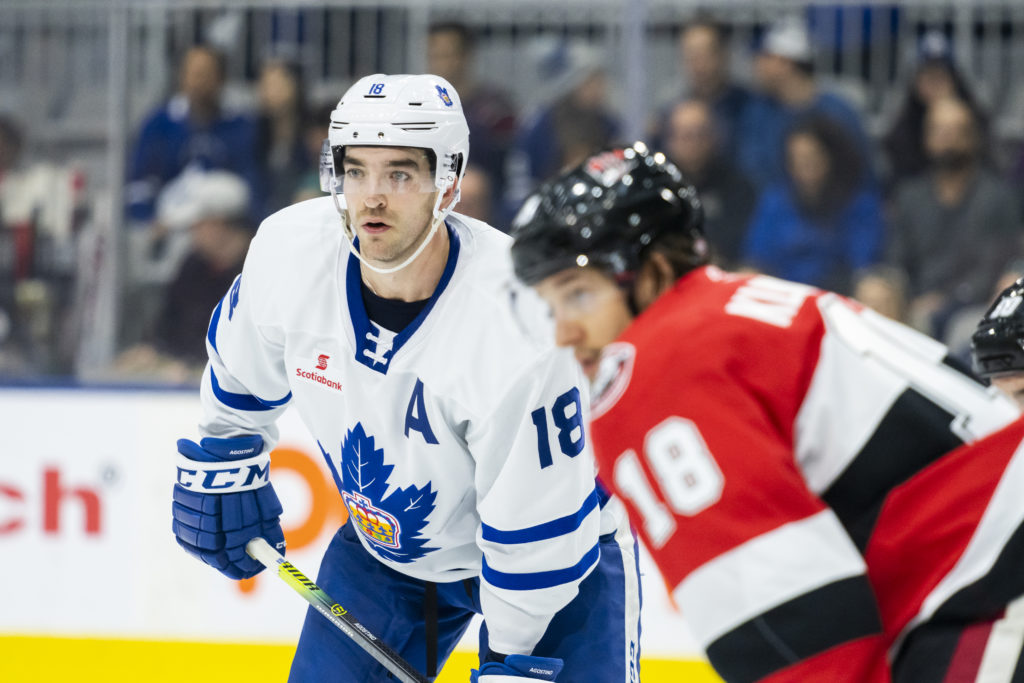 The Marlies suffered their first loss at Coca-Cola Coliseum this season, dropping a 4-1 decision to the visiting Belleville Senators.

Belleville’s Joseph LaBate opened the scoring at 12:59 of the first period to shift the momentum in the visiting team’s favour. Minutes later, the Senators converted on a power play opportunity to extend their lead to 2-0. The Marlies outshot the Senators 14-7 in the opening frame, but trailed by two on the scoreboard heading into the first intermission.

Kenny Agostino solved Senators’ goaltender, Joey Daccord at 13:42 of the second period, wiring a shot from the hash marks on a 5-on-3. The goal cut the Senators’ lead in half and the Marlies were down by one heading into the final frame.

AHL leading scorer, Drake Batherson, restored Belleville’s two-goal lead at 13:57 of the third period. The Marlies peppered Daccord with 12 shots in the third period but were unable to find the back of the net. Although the Marlies held the Senators to only 5 shots on goal in the final frame, they held onto their lead and potted an empty net goal to seal a 4-1 win.

The Marlies will be back in action tomorrow to host the Rockford IceHogs in their last home game before the holiday break.

On controlling the pace of play after giving up two goals in the first period:
I thought for the whole game basically five-on-five, I really liked our game. In the third period we got five power plays, we’ve got to make at least one of those count. That’s really the difference in the game.

On the power play (1/9):
It’s disappointing. We know we need better quality in that area and I think after getting this many in-game reps the guys will feel a lot more comfortable tomorrow and we should have a lot better effort in that area.

On Belleville’s performance:
Yeah, it’s obviously a good team. Their offence looks really good. They’ve added a lot of pieces. They’re a dangerous team. We obviously had our opportunities on the power play today and didn’t score and they had a five-on-three and they capitalized on theirs. So, that’s really the difference in the game I think and it’s something that we’ve got to clean up if we’re going to continue to get better and if we’re going to beat that team all year.

On whether a good penalty kill and goaltending from Belleville or Toronto’s lack of execution resulted in the power play going 1-for-9:
I think you can always say both. I think you have to give a team credit when you go 1-for-9 but we want to be a lot better obviously. (Petan’s) on the power play now and it’s something that we’re not totally accustomed to. When you throw a new guy on things are a little different. Overall, we’ve just got to be better. We’ve got some elite talent on both units. It’s something that you’ve got to do better than 1-for-9, especially when you have five-on-three opportunities. So, it’s something that we’ve got to clean up and tomorrow against Rockford do a lot better.

The Battle of Ontario makes its way back to Coca-Cola Coliseum today as the Marlies and Senators get set to square off for the third time this season.

Toronto holds a 2-0 lead in the 12-game regular season series, after defeating Belleville 4-1 and 7-4 in their first two meetings this season. The Marlies remain perfect at Coca-Cola Coliseum this season and are 7-3 in their previous 10 contests. They currently sit in second place in the North Division, four points ahead of the visiting Senators, and will be looking to bounce back following Wednesday’s 6-4 loss to the Utica Comets.

Belleville enters today’s game with wins in their past two games and will be looking to close the gap in the division standings and extend their win-streak to three straight. The Senators are also 7-3 in their previous 10 games and have won four of their last five.

The Marlies will have their hands full today as they aim to shut down Senators’ forward and AHL leading scorer, Drake Batherson. Batherson was lethal against the Marlies last season, totalling 22 points over 10 meetings. He comes into today’s game riding a six-game point streak (3-9-12).

Another Marlies Graduate bobblehead giveaway is on deck today as the first 3,000 fans through the gates at Coca-Cola Coliseum will receive a limited-edition Kasperi Kapanen bobblehead to add to their collection.

Puck drops at 4:00 PM on Leafs Nation Network and TSN 2. Fans across Canada can also catch today’s action on the go with the Marlies livestream in the official Maple Leafs app.