Senators Double Up on Marlies 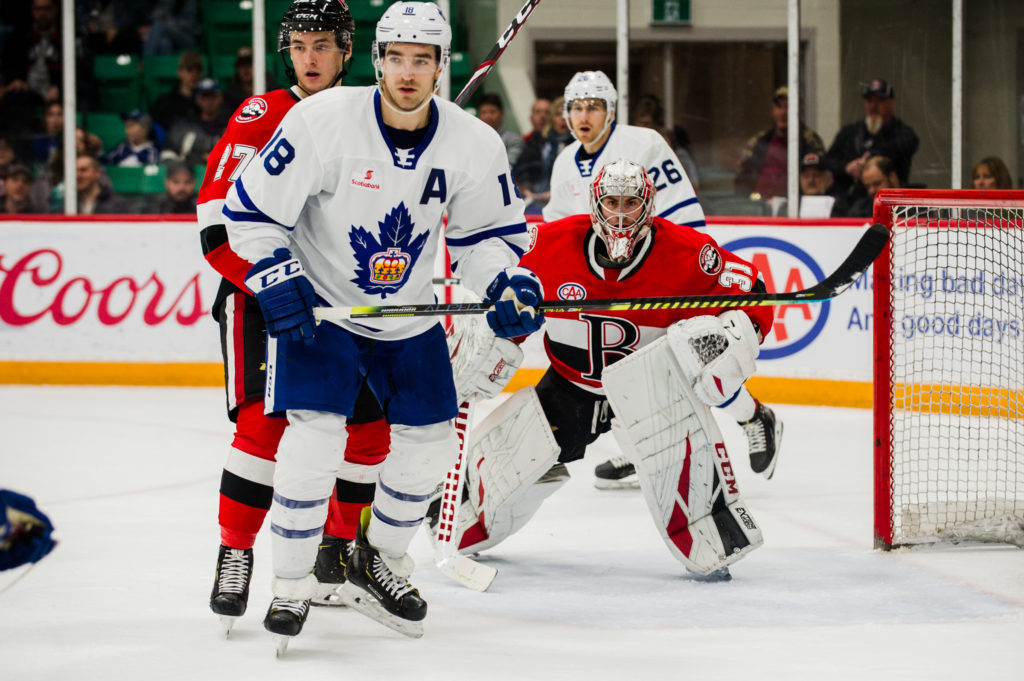 The Marlies dropped a tough one tonight, falling 8-4 to the Belleville Senators.

Toronto found themselves in an early hole as the Senators notched a pair of goals just before the half way mark of the frame to take an early 2-0 lead. The Marlies responded late in the frame as Miikka Salomaki jumped out on a shorthanded breakaway and potted his second as a Marlie. The Senators outshot the Marlies 12-9 in the opening 20 minutes and held a 2-1 lead heading into the first intermission.

Scott Pooley evened things up at 5:07 of the second period, notching his eighth of the season. The Senators pulled ahead again shortly after and extended their lead to 5-2 with three consecutive goals. Matt Read then scored on a power play to close the gap. The Marlies trailed by two heading into the final frame.

Egor Korshkov scored early in the third period to bring the Marlies back within one with his 16th of the season. The Senators then responded with three unanswered goals to seal an 8-4 victory.

The Marlies will be back on home ice on Friday for their first of back-to-back games against the Syracuse Crunch.

On what was different in tonight’s loss versus the comeback win against Texas:
Our lack of compete right from the start. For how many points we need right now and what this week is and what we’ve been talking about and they know our playoff lives are on the line here, that first period wasn’t good enough and to think that we can turn it on late against a good team like this, the players should be really down on themselves.

On what kind of team the Marlies are when they have success:
Our team, we can play our possession style if we have the compete and we do at times and when our brains are turned on and we’re engaged and active in the game, we’re not shoulder-checking, we’re not identifying what the time and space is around us before we get the puck, it ends up playing too slow. They just think that they can take a game off all of sudden, just because they had two decent games they put together and they’ve got to find a way to want more than that for themselves within our brand and we’ve had success winning hockey games by all five guys on the ice being active and holding onto the puck and making plays with each other, it’s when we get individual.

On if it was tough leaving Joseph Woll in for the entire game:
It was tough. We were finding our way back in the game so it didn’t feel as though we got too far away from it. He’s a great goaltender, he deserves a lot better. I could hear guys after in the room not happy with themselves and know that our goalie deserves a lot better than what they gave him here tonight.

The Marlies are set for a big divisional matchup tonight as the Battle of Ontario resumes in Belleville.

The Marlies recently took a 5-4 lead in the regular season series against the Senators, picking up back-to-back wins in a home and home last month.  Toronto doubled up on Belleville 4-2 on Valentine’s Day and then completed a dramatic overtime win the following day on home ice. Toronto battled back from a four goal deficit twice in that game before completing the comeback in overtime and winning 7-6.

On top of recent success over Belleville, the Marlies will also be looking to build off a big comeback win over Texas on Monday as they continue to fight their way back into playoff contention. The Marlies currently sit in seventh place in the North Division with 61 points, four points back from the fourth place Syracuse Crunch. Monday’s win seemed to bring a renewed confidence to the team that they’ll be looking to carry into tonight’s game. “Obviously, a special game for us coming back here and getting those two points,” said goaltender Joseph Woll following the game on Monday. “I think the guys really worked hard to earn that. I think we had spots in that game where we were really good and really turned it on in the third period so it was really nice to see us get rewarded for that kind of stuff.”

The Senators remain one of the top teams in the league and continue to sit atop the North Division and Eastern Conference standings. They come into tonight’s game riding a two-game win streak and have won six of their previous 10 contests. Josh Norris leads the way for the Senators with 58 points (30 goals, 28 assists) through 52 games. He sits fourth overall in league scoring.

It continues to be a tight playoff race in the North Division with both Binghamton (64 points) and Laval (62 points) battling for a postseason berth as well. The Marlies have a tough week of crucial games ahead against opponents they are chasing in the North Division standings. Following tonight’s game, the Marlies will head home for back-to-back games against the Syracuse Crunch.