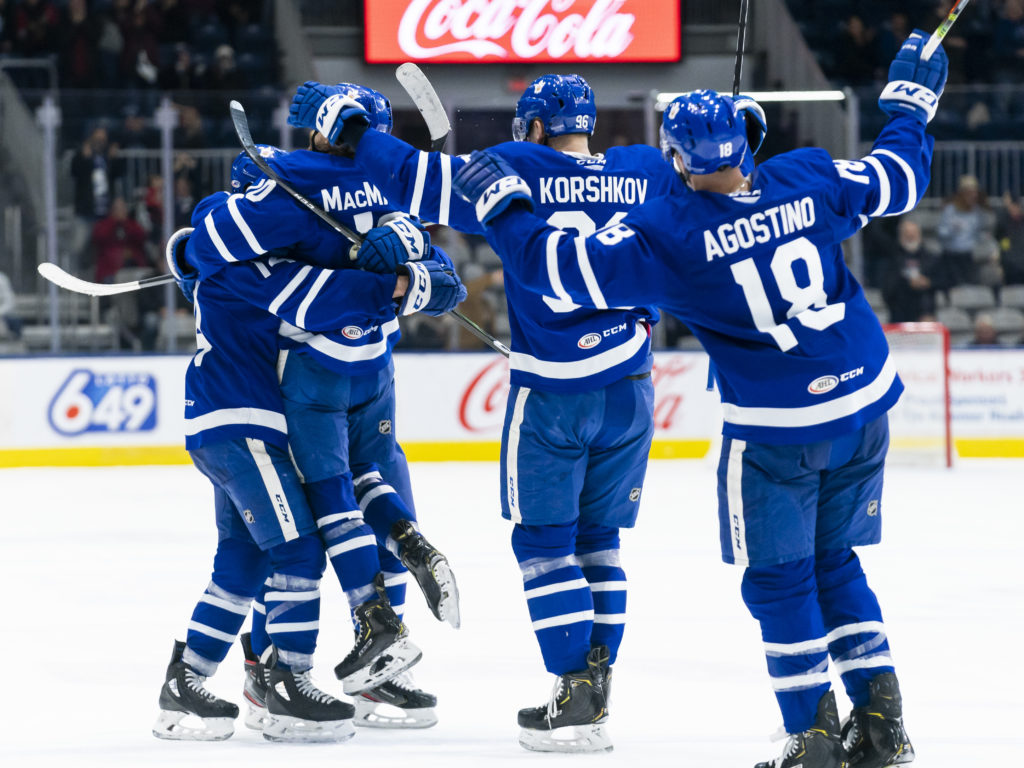 The Toronto Marlies didn’t get the start they wanted today, finding themselves in a four-goal deficit just past the halfway mark of the opening frame. The Senators came out flying as they looked to bounce back from yesterday’s loss to Toronto and put up four goals in just under 6 minutes to take a commanding lead. At 15:57 of the first period, Scott Pooley and Joseph Duszak converted on a two on one to get the Marlies on the board and cut the deficit to 4-1. With only four shots in that opening frame, the Marlies needed the first intermission to regroup and hopefully right the ship in the second period.

The Marlies came out with more energy in the second period, but were put back on their heels when the Senators scored at 6:49 to make it 5-1. Mason Marchment then scored on a power play at 9:55 to make it 5-2. He has eight goals in his last five games. Marchment has 18 points (13 goals, 5 assists) through 24 games. Later in the frame, Mac Hollowell buried a rebound on the doorstep to bring the Marlies within two. Matt Read and Garrett Wilson assisted on the goal.

Egor Korshkov provided the overtime heroics at 1:01 of extra time, with a beautiful dangle around Gustavsson to complete the comeback. Korshkov has scored the game-winning goal in consecutive games. Korshkov has 21 points (14 goals, 7 assists) in 35 games with the Marlies.

The Marlies will be back in action on Monday for a Family Day game against the Binghamton Devils.

On tonight’s game:
A lot of good things for a team to build confidence to find a way to get back into a game. Joseph Woll was unbelievable tonight. We kind of hung him out to dry early in the game, especially in the first period. He made some really good saves. It’s not like the goals were weak goals, we just were giving up too much. We finally found our game. Joe continued to battle for us and give us confidence to come back in it, and the offence came. The guys started to play the right way and do the things that needed to find those goals.

On the first period timeout with Toronto down 4-0:
It didn’t feel like I needed to yell too much. I think they knew themselves that the effort wasn’t there. The execution of the game plan that we had followed the day before that brought us success was not being executed. So just a reminder of a few points of what we needed to do to get back to playing our game. And I could sense that they were all disappointed in how they started and they started to turn it on from there.

On Joseph Duszak, Mac Hollowell and Scott Pooley’s performance tonight:
Great. Any time you can get depth guys that come up in the organization have huge impacts for you in a game is great signs of the development process here within this organization. Really happy for their success tonight in helping our team.

On Adam Brooks’ tying goal and leaving in overtime due to injury:
Huge goal…Everybody loves him. You can tell that all his teammates are rooting for him every day. He’s such a good person. He brings a lot of positive life and energy in the room with everybody so it’s good to see everybody else’s reaction and how excited they were for him and that goal. In terms of injury, it’s too early for me to know or have gotten a report on what’s going on.

On what has led to Mason Marchment’s recent success:
Get to the net. He’s really good at net-front presence and just getting around the paint and being difficult and strong and big to play down there and plays with a little bit of an edge. He does a good job getting teams off their game so he gets to the net and guys are more focused on him than actually playing the game and it gives him more time and space to make plays.

On what Toronto did differently in the final two periods:
We just played with a little more urgency. We knew we had to take a couple risks to get some offence going and it paid off for us and Woll made some huge saves for us back at the final line of defence there. We fed off it and we were able to get one on the power play. PK was great, so it was just a nice team win there.

On Egor Korshkov’s overtime goal:
Yeah, I think he only scores highlight reels. It’d be nice to see him get a garbage one here every once in a while and make us feel a little bit better. He’s a skilled player, big body, and he’s a hell of a player.

The Marlies are back in action today for the second half of a home-and-home with the Belleville Senators.

Toronto evened up the Battle of Ontario regular season series last night, doubling up on the Senators 4-2. Mason Marchment kept his streak alive, scoring the Marlies’ opening goal late in the first period. He has seven goals in his last four games and 17 points (12 goals, 5 assists) through 23 games. Matt Read sealed the win for the Marlies, scoring the lone goal of the third period. Read has goals (3) in three consecutive games and 17 points (8 goals, 9 assists) in 36 games this season. Toronto was a perfect 6/6 on the penalty kill last night. It was the third consecutive game Toronto has not allowed a goal on the penalty kill (15/15).

Yesterday’s win for Toronto snapped the Senators’ seven-game win streak, and they’ll certainly be looking to respond in today’s rematch. Belleville leads the division and the conference with 58 points.

These divisional wins are huge for the Marlies who are looking to find consistency through this important stretch of games. When asked about the team’s confidence with recent success, head coach Greg Moore commented “it’s really big, it’s really important.” “It’s a really big month for us,” he continued. “Thought the team was building a lot of confidence prior to these three games. They saw a lot of the good stuff they were doing and like we’ve talked a lot about, not getting the results. Really happy for them now to be getting the results and start reaping the rewards of the hard work of the last five, six weeks.”

Puck drops at 4:00 PM today on Leafs Nation Network. The game will also be streamed live in the Maple Leafs app.