Marlies Double up on Senators 4-2 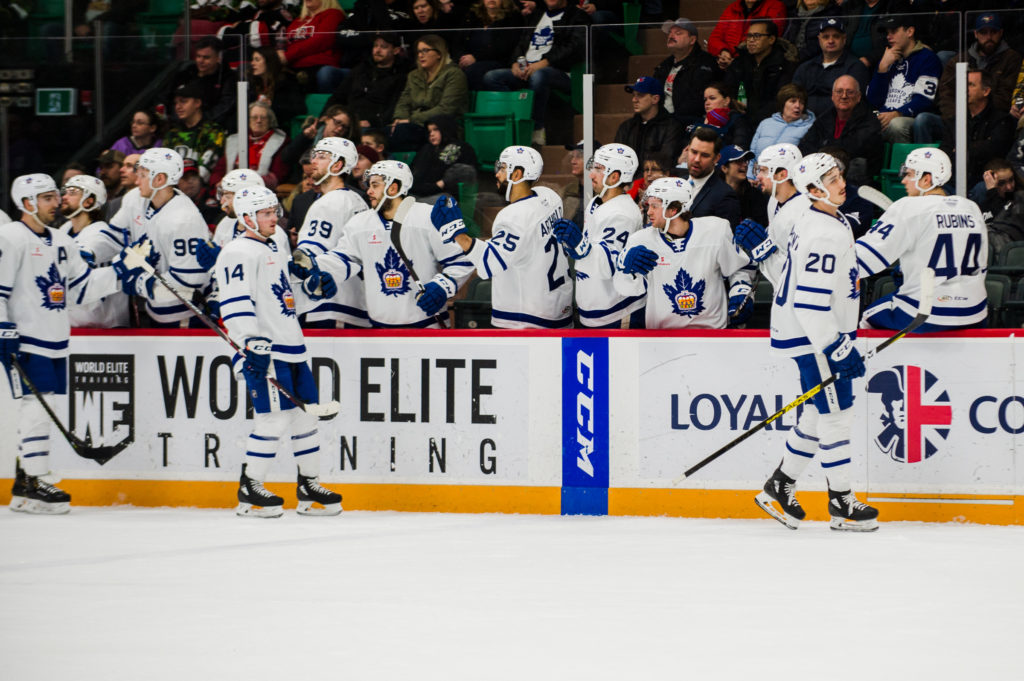 The Marlies extended their win streak to three straight Friday night, defeating the Belleville Senators in the first half of a home-and-home between the North Division rivals. Mason Marchment put the Marlies on the board at 19:13 of the first period to even the score 1-1. The goal was assisted by Kenny Agostino. Kasimir Kaskisuo faced 14 shots on goal in the first period and made some key saves to keep the score even after 20 minutes of play.

The Senators restored their lead early in the second period but the Marlies continued to keep things close and answered back at 9:22. Kenny Agostino capitalized on a power play opportunity, burying the loose puck in a frenzy in the Senators’ crease. Marchment and Adam Brooks recorded the assists on Agostino’s 22nd of the season. Late in the frame, Egor Korshkov gave the Marlies their first lead of the night beating Joey Daccord with a beauty backhand through the five hole. Kristians Rubins and Matt Read assisted on Korshkov’s 13th of the season. The Marlies held the Senators to only four shots on goal in the middle stanza, and held a 3-2 lead heading into the final frame.

Matt Read sealed at 4-2 win for Toronto at 8:46 of the third period, burying the puck after it came off the back boards right onto his stick in front of the Belleville net. Garrett Wilson and Rubins provided the helpers.

The Marlies will be back on home ice tomorrow to close out this home-and-home against Belleville. Puck drops at 4:00 PM at Coca-Cola Coliseum.

On tonight’s game:
It was probably one of the best performances for our team sticking to the game plan and being disciplined within it. Kas did a heck of a job in the first period, keeping us in the game and letting the team find it and build their confidence. Then the second period, we had three, four, five shifts in a row where we were in the o-zone, we wore the team down a bit and started to build momentum.

On building the team’s confidence with recent success:
It’s really big, it’s really important. It’s a really big month for us. Thought the team was building a lot of confidence prior to these three games. They saw a lot of the good stuff they were doing and like we’ve talked a lot about, not getting the results. Really happy for them now to be getting the results and start reaping the rewards of the hard work of the last five, six weeks.

On how the team kept momentum with 11 penalties called during the game:
Yeah, it’s really hard, even another reason to be proud of the group for staying in it, staying with it and not allowing the back-and-forth penalty calls to throw them off their game or lose momentum when we had it.

The Marlies are back on the road tonight, kicking off a home-and-home with the Belleville Senators.

Toronto picked up an important four points this past weekend following back-to-back wins over North Division rivals, the Rochester Americans and the Laval Rocket. It’s a tight race as teams in the North Division continue to jockey for playoff positioning, and the road ahead doesn’t get any easier as the Marlies face off against North Division opponents in each of their upcoming 10 games. As it stands, the Marlies, Syracuse Crunch and Laval Rocket are even with 53 points; the Marlies sit in fourth place with two games in hand. Building off these most recent back-to-back wins will be important as Toronto looks to go on a run down this next stretch of games, in hopes of solidifying a spot in the postseason.

The Senators continue to be one of the hottest teams in the league and come into tonight’s game riding a seven-game win streak. They’ve won nine of their previous 10 and sit atop the North Division standings with 68 points. Belleville recently took a 4-3 lead in the 12-game regular season series against Toronto, and the Marlies will want to bounce back from that 7-4 loss and even up the series at four apiece.

Puck drops at 7:00 PM tonight on AHLTV. Fans can also follow along on Twitter (@TorontoMarlies) for live updates.